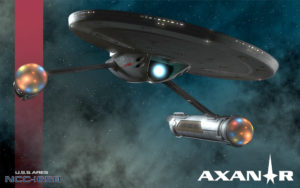 Okay, we now know one very important thing that we’d only suspected up until now: Judge R. Gary Klausner is a closet Trekkie (or possibly, it’s one of his law clerks)!

Before I start a deeper dive into the judge’s 15-page Order on Motion for Partial Summary Judgment issued on Wednesday morning, I’d just like to share a few quick quotes from it:

Thus, the copyright infringement claim can live long and prosper if the Axanar Works are substantially similar to the Star Trek Copyrighted Works.  (I seem to recall seeing that one before in the judge’s denial of the defense’s motion to dismiss…but wait, there’s more!)

Sometimes a feeling is all we humans have to go on.  (Kirk said it first in “A Taste of Armageddon,” but now Judge Klausner–or one of his clerks–has said it, too, on the bottom of Page 4.)

These works have transported the hearts of a legion of fans to the Star Trek universe.  (I can’t believe the word “transported” was coincidental, folks.)

Defendants’ attempt to treat the Battle of Axanar as a private little war is unpersuasive.  (Seriously, now someone’s just showing off!)

Peters “was interested in creating alternative ways for fans to view Star Trek” – the way to Eden perhaps.  (And…..no.  Sorry, that one was too much of a reach.  Herbert!)

Okay, enough of the cutesy stuff!  It’s time to take a look at the GOOD, the BAD, and the UGLY…and Axanar certainly got a little of each (and more of some).  Shall we begin?

Let’s start with the silver linings for Axanar…

It ain’t over till it’s over, and it’s still not over.  The best news that Axanar got Wednesday (and admittedly, there wasn’t much), was that Judge Klausner denied ALL motions in the case, including motions that would have placed the plaintiffs just a few yards from the end zone.  Here’s what the plaintiffs wanted the judge to say (quoted from their Proposed Order Granting Plaintiffs’ Motion for Partial Summary Judgment–which is required for attorneys to submit):

This would have, effectively, ended the case.  It would have left open only the question of how much to award to CBS and Paramount because the judge would have already ruled that Alec Peters infringed on CBS’s intellectual property (Star Trek).

But Judge Klausner was not willing to go so far as to determine the infringement solely on his own.  He wants to let a jury decide, based on the determination of “substantial similarity” (more on that momentarily).  Klausner himself states that he’s leaning toward the plaintiffs’ claims of infringement based on his personal opinion (that comes under “the BAD” section), but he feels that the actual determination should be made by a jury.

The plaintiffs also wanted the judge to say the following:

Essentially, they wanted the judge to forbid Alec Peters or anyone he’s associated with from making any more Axanar anything.  And again, Judge Klausner stopped short of issuing that order.

That said, he did leave open the possibility of doing so after the verdict…assuming the jury determines that Axanar is substantially similar to Star Trek…

The judge also said something very significant that could, potentially, lower the verdict award (if Alec Peters loses) from seven figures down to just five figures.  It seems the judge is partial to the non-willful infringement argument that I’ve been discussing these past few months (he even referenced my History of Star Trek Fan Films document).  And so he denied the plaintiffs’ motion to declare Alec Peters’ infringement to be “willful” (which would have locked in a $150,000/violation penalty).  Here’s what Judge Klausner said:

A determination of willfulness requires an assessment of a defendant’s state of mind. Questions involving a person’s state of mind are generally factual issues inappropriate for resolution by summary judgment.”

Here, Star Trek has a long history of fan films that stayed free from copyright disputes. (Lane Decl. Ex. 1, ECF No. 75-26.) Although Peters repeatedly stated that the Axanar Works were not to be called fan films, Defendants assert that this statement was made only to distinguish the quality of the Axanar Works.  Thus, Peters’ belief that the Axanar Works were noncommercial fan films in light of his understanding from CBS that it would tolerate such films creates an issue of his state of mind that must be adjudicated by the jury.  Furthermore, before creating the Axanar Works, Peters sent several emails to CBS to report third parties whom he believed were using Star Trek intellectual property without authorization.  Viewed in the light most favorable to the nonmovant Defendants, Peters’ actions demonstrate a respect for Plaintiffs’ intellectual property that makes a finding of willfulness on summary judgement inappropriate.

(Remember when I toldja that the plaintiffs’ “dig” about Alec reporting other fan films would come back to bite the plaintiffs on the hiney?   Read the final nine paragraphs–they’re short–of this blog to see what I predicted.)

Now, keep in mind, just as the judge is leaving the determination of substantial similarity (infringement or not) up to the jury, he’s also letting them decide willful versus non-willful infringement if they find Alec Peters liable.  So that means there’s still hope for Axanar because juries are made up of people, not judges or lawyers.  But as you’ll see in the next two categories, it’s now a much, MUCH narrower path to victory for Axanar and a substantially higher probability of defeat.

So yes, the plaintiffs didn’t get what they asked for in summary judgement, but neither did the defense.  And in the defense’s case, the reasons the judge gave for denying their requests lasted for nearly a dozen pages and were pretty thorough.  That said, the defense’s arguments were pretty thorough, too (citing a seemingly endless parade of legal nuance and case-law precedent), so the judge was likely matching them argument-for-argument, carefully suturing every scalpel cut.  The plaintiffs were using a hammer, so all the judge really had to do with them was simply remove the nail temporarily and say he’ll give it to them later if the jury rules in their favor.

The first thing the defense wanted was for the judge to toss out the charges dealing with the full Axanar movie because it hasn’t been completed, and you can’t hold someone accountable for something they haven’t done yet.  In other words, suing over the Axanar movie is premature.

The judge disagreed, citing the same reasons he gave when he denied the defense’s Motion to Dismiss on the same grounds that the Axanar feature film was “unripe” (premature).

The Court will not repeat its rationale here, except to note that evidence of a final shooting script satisfies the judicial standard for summary judgment.

Since Garth has appeared as a live character, he has physical as well as conceptual qualities.

In the episode [“Whom Gods Destroy”], Garth discussed his victory in the Battle of Axanar with Captain Kirk, the Captain of U.S.S. Enterprise. In addition, a 2003 novel, titled Garth of Izar and copyrighted by Paramount, further developed the character.

Garth was a former starship captain and was famous among Starfleet officers for his exploits in the Battle of Axanar.  In fact, his exploits were required reading at the Starfleet Academy.  He charted more planets than any other Starfleet captain.  Garth’s identity as a Federation hero sufficiently delineates him and sets him apart from a stock spaceship officer.

As for species, like the Vulcans and Klingons, the judge didn’t throw them out as as non-copyrightable either:

Taken together, these characteristics of Klingons and Vulcans are not “elements of expression[s] that necessarily follow from the idea” behind the expressions (visual expressions, for example) and may be entitled to copyright protection.

Then you might recall me explaining that clothing designs are not, in and of themselves, copyrightable.  Only things that go onto clothing and have their own functional uses can be copyrighted.  Well, here’s Klausner’s take…

The artistic aspects of these costumes that “can be identified separately from, and are capable of existing independently of, the utilitarian purpose of the costumes” may be copyright protectable.  []  The combination of artistic visual elements of these uniforms likely contains original expressions protectable under the Copyright Act.

And then there’s the “and the rest…” grouping of planets, ships, spacedocks, Vulcan mountains and buildings, Surak, the Federation and Klingon logos, transporters, phasers, stardates, warp drive, and the Klingon language.  Each of these things is not copyrightable individually (you can’t copyright a word or a planet or a mountain).  However, taken together as a whole…

Although each of these elements may not be individually original and copyright protectable, they are “numerous enough and their selection and arrangement original enough that their combination constitutes an original work of authorship,” especially when combined with the costumes and fictional characters and species…”

Anyway, the batter is out.  All of the defense motions for summary judgment saying that Axanar did NOT use copyrighted intellectual property in its film(s) because those items cited were not protectable was shot down with the following sentence:

Accordingly, the Court finds that Defendants use copyright-protected elements in the Axanar Works.

So the next thing the defense argued in its summary judgment motion was:

[N]one of Defendants’ Works are substantially similar to Plaintiffs’ Works. Plaintiffs own a limited number of Star Trek episodes and films, but they do not own a copyright to the idea of Star Trek, or the Star Trek universe as a whole.  Defendants’ works do not borrow sufficient material from the heart of any of Plaintiffs’ Works to be considered substantially similar to, or derivative of, any particular episode or film owned by Plaintiffs.

“Not so fast!,” says Judge Klausner:

Indeed, Defendants use and reference so many distinctive and widely recognized elements from the Star Trek universe that the Axanar Works invoke Star Trek in the minds of viewers.  Together these elements are “qualitatively important” enough for a finding of substantial similarity, even if they are “relatively small in proportion to the entire work” (which they arguably are not).  Defendants’ extensive use of elements from the Star Trek Copyrighted Works to create a Star Trek prequel can constitute infringement in spite of Defendants’ new story.

And to add insult to injury, this next paragraph was pretty harsh:

Defendants further argue that the Axanar Works are inspired by many sources.  Assuming that to be true as the Court must on a summary judgment against Defendants, the argument still fails. Defendants must obtain permission to use protectable expression from any and all preexisting sources to which their work bears substantial similarity.

To be fair, just because Alec Peters was inspired by Band of Brothers and M*A*S*H doesn’t mean he infringed on their intellectual property and needs permission from those studios.  But I get the point the judge is making.  The defense has thrown everything including the kitchen sink into their filings.  Next time, leave out the sink.

Anyway, the end result is still the same.  The judge denies the portion of the defense motion for summary judgment claiming that Axanar is not substantially similar to Star Trek:

After reviewing evidence before the Court, including the Axanar Works, the Court is satisfied that Defendants have achieved their goal of creating authentic Star Trek films and script. The Axanar Works are substantially similar to the Star Trek Copyrighted Works, at least under the extrinsic test.

By the way, did you catch that, “Defendants have achieved their goal of creating authentic Star Trek…”?  In other words, the judge is not buying the argument that there was any intention here other than to create authentic Star Trek.  So…OUCH!

And if you think that’s bad, get ready for Part 2 tomorrow where we look at…THE UGLY!

37 thoughts on “AXANAR lawsuit SUMMARY JUDGMENT Order – THE GOOD, THE BAD, and THE UGLY! (Part 1)”