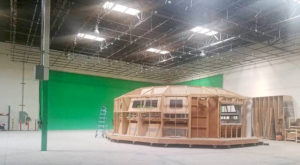 As previously announced, the Indiegogo crowd-funding campaign for INDUSTRY STUDIOS (formerly Ares Studios) in Valencia, CA is now live…and kicking butt, it seems!  With a stated goal of $60,000 to cover rent, utilities, insurance, off-site storage of sets (when not in use in order to clear the sound stage), payment processing fees, and perk production and fulfillment ONLY (no salaries), the new campaign had already taken in more than $6,0o0 (10% of their primary goal) in just the first two hours! 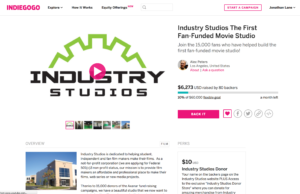 There was a question whether fans and donors would stay loyal to AXANAR (which will be filmed in Industry Studios) after the difficult year of 2016 was filled with legal proceedings and a parade of accusations and vitriol directed by detractors at Alec Peters, the man behind both Axanar and Industry Studios.  In fact, one detractor has recommended on Facebook that those wishing to “spread the truth” donate $1 so they can post critical comments to the campaign.  I don’t have confirmation that such a thing has happened yet, but it wouldn’t be particularly surprising…sadly. 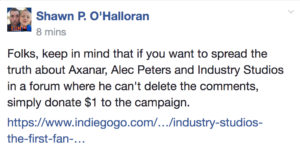 So far, the momentum appears to be on the side of the donors and supporters.  The campaign has stated that the money raised will go toward helping to fund a facility that can be used for multiple fan, independent, and student films at little-to-no cost for the production itself.

It’s a very cool idea, and one that apparently already has the interest of one local Los Angeles film school.  Also, the campaign has finally revealed which non-Axanar production will be the first to use the studio.  For months, Alec Peters has been stating that’s he was in discussions with producers eager to use the studio…and both supporters and detractors were wondering who.  Now it’s been announced that this production will be Personal Space, which had starred the late Richard Hatch in its soon-to-be released first season.  Season two will be crowd-funding soon and be co-produced by Axanar Productions.

Keep in mind that none of the money raised in this campaign will go to fund the filming of the Axanar fan film (a stipulation of the legal settlement with CBS and Paramount).  Therefore, none of the perks offered have any Axanar anything (sorry if you wanted more patches, folks)…with one exception.  A special “Origins: Behind the Scenes of Axanar” documentary will be released on Blu-ray with footage and commentary on the making of Prelude, the “Vulcan Scene,” and the never-released Heroes vignette…as well as background info on the Four Years War.

It looks to be an exciting month!  You can find out more about the campaign and make a donation if you’d like by clicking this link:

And you can watch the donor informational video below: