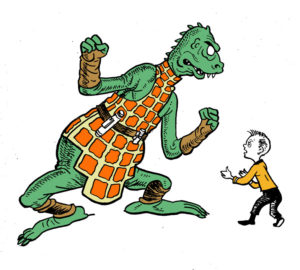 If you’re Star Trek “Tribbles” creator DAVID GERROLD and comic book artist TY TEMPLETON, one of the places you’ll boldly go next year will be to the Ninth Circuit federal courtroom!

Actually, they and their lawyers have already been spending a good deal of time in front of Judge JANIS L. SAMMARTINO… defending themselves from a copyright and trademark infringement lawsuit filed by DR. SEUSS ENTERPRISES (DSE) against them and publisher ComicMix in late 2016.

At issue was a “mash-up” project combining elements of Star Trek with the whimsical rhyming and artistic styles of the late Dr. Seuss into a book titled Oh, The Places You’ll Boldly Go!  In September of 2016, a Kickstarter for the project took in $30,000.  However, DSE quickly asserted their intellectual property rights, and Kickstarter promptly shut down the campaign and froze the pledged donations.  Then things went to court.

Earlier this year, the situation looked somewhat hopeful for “Team Mash-up,” as I like to call them.  The judge in the lawsuit dismissed the trademark claim entirely (it would no longer be a part of the lawsuit), and she said that the fair use aspect of the remaining copyright infringement complaint was “evenly balanced” between the plaintiff and the defendants.  And even better than that, if DSE couldn’t prove to the judge’s satisfaction that there were real financial damages at stake (at that point, she was simply giving them the benefit of the doubt), then this lawsuit might be dismissed entirely before it ever saw a jury, and fans would likely be reading a Star Trek/Dr. Seuss mash-up book by next Christmas.

What a difference six months make!  This infringement lawsuit suddenly reminds me of a famous football game from 1993 between the Houston Oilers and the Buffalo Bills that has become known as “The Comeback.”  Houston was leading by a massive score of 28-3 at halftime.  But by the end of the game, Buffalo had won in overtime 41-38.

And while the “game” in this mash-up lawsuit isn’t over just yet, if you’re a fan of David Gerrold and Ty Templeton (as I am), it’s suddenly nail-biting time.

With both sides filing motions (the defense to dismiss the rest of the case, the plaintiffs to reinstate the trademark complaint and rule against the defendants immediately), everyone appeared before the judge in her San Diego Courtroom at the end of November.  Last Thursday, Judge Sammartino issued this Order Denying Motion to Dismiss.

In short (if you don’t want to read 24 pages of legalese), the case is going forward…with BOTH the copyright infringement complaint intact AND the trademark infringement complaint resurrected from its previous status of having been dismissed.  (Yes, a judge can do that.)  That is NOT good news for Team Mash-up.

What’s worse is that the plaintiffs have now convinced the judge that, yes, the mash-up does indeed present real potential financial harm to them in the marketplace.  That puts fair use into a complete state of equilibrium—where the argument could really go either way (more on that shortly).

And the reason that the trademark infringement complaint is back on the table is because the judge reconsidered Team Mash-up’s primary defense—something called “nominative fair use” (which is different than “fair use” for copyrights)—and decided that the mash-up might have gone one step too far in mimicking the style of Dr. Seuss (more on the trademark resurrection in Part 2 tomorrow).

Not all hope is lost for the defense, however, as the judge is still very cognitive of the significance of this case in setting precedent for the emerging genre of the “mash-up.”  A harsh ruling in favor of the plaintiffs could potentially kill an entire creative art form, while a lenient ruling  for the defense could vastly limit copyright and trademark protections.  This case is a LOT bigger than it might look…which is why I’ve been covering a non-Star Trek fan film story so thoroughly. 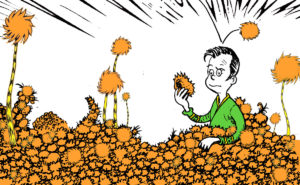 So okay, if you’ve had enough and gotten the “gist,” feel free to stop reading here.  But for a deeper dive into what happened, let’s jump right in…

As some of my longtime readers know, I find the “fair use” defense for cases involving copyright infringement to be utterly fascinating (mainly because  of the CBS/Paramount v. Axanar lawsuit).  And the defense boils down to four basic factors:

I’ll save you the long-winded analysis and just give you the scoreboard version.  Essentially, the judge awarded a point in favor of the defendants for factor #1 by declaring the work to be “transformative.”  In other words, it changes enough from the original source material to be different and not a direct copy.  Image comparisons such as those below were used to help her reach her conclusions. 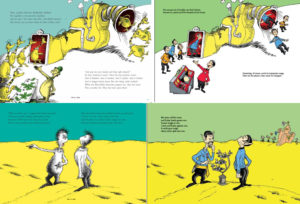 And for those of you arguing that Team Mash-up was intending to make a profit, the judge addressed that in her ruling:

…the Court found although Defendants created their work for profit, which weighs against Defendants, this “weight is slight given the transformative nature of work.”

As for factor #2, that one went slightly in favor of the plaintiff, but historically, most works worth suing over do merit some kind of protection, and so the courts don’t usually count this factor as strongly as the other three when considering fair use.

Factor #3 the judge felt was neutral, again because of the transformative nature of the mash-up.  The defendants didn’t use more than they absolutely needed to—at least as far as copyright fair use is concerned (not the case for the trademark side, as you’ll see tomorrow)—so the third factor isn’t a point for either side.

But factor #4 has now scored a point with the judge strongly in favor of the plaintiff.  The judge still agreed with Team Mash-up that a book that’s essentially a combination of Star Trek and Dr. Seuss doesn’t directly cannibalize the market of people who would buy Dr. Seuss books and products.  In other words, part of the market harm that a copyright holder needs to demonstrate is that someone would buy the derivative product INSTEAD of the original (like a bootlegged DVD)…or that having the derivative available would cost a sale (like distributing someone else’s copyrighted music for free).  But most likely, fans of Dr. Seuss wouldn’t buy the mash-up book instead of buying something else Seuss-related.  Indeed those folks who would be most likely to buy the mash-up book are probably already Seuss fans and customers.

So where’s the financial harm then, you ask?  The answer is simple: licensing!

Previously, the defense argued (and correctly so), that DSE has never before attempted to license a mash-up combining their property and another.  Therefore, this mash-up isn’t costing DSE any potential business or revenue from licensing.  DSE argued, however, that just because they haven’t licensed a mash-up before doesn’t mean they won’t in the future.  The judge agreed:

What the defense was hoping for was a decision by the judge that, failing to show actual potential market harm, the plaintiffs would lose their last lifeline in stopping a successful fair use defense.  The judge would then grant a dismissal of the copyright infringement complaint, and with the trademark complaint already dismissed, this lawsuit would be over.

Instead, the judge said this:

Thus, after again weighing the fair use factors, the Court finds Defendants’ fair use defense fails as a matter of law. The relevant information in the FAC regarding factor four, if anything, shifts the balance more in Plaintiff’s favor due to the allegations regarding potential market harm. The Court denies Defendants’ Motion to Dismiss Plaintiff’s claim of copyright infringement.

And with that, this case is most assuredly NOT going away.

Now, this doesn’t mean the judge is throwing out fair use as a defense (as happened in the Axanar lawsuit), but it does make the argument quite a bit more difficult to prove.  If a jury agrees, well, this could be a biggie.

Tomorrow, who here is ready to learn about trademarks?  They work very differently from copyrights!  And in this case, the plaintiffs were actually able to convince the judge to CHANGE HER MIND and reinstate the trademark complaint that she had previously dismissed.  How the heck did that happen…and why on earth am I blaming Godziila for it???