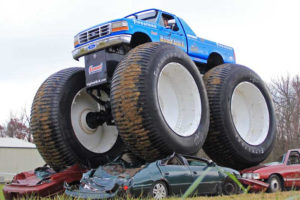 Wow, quite a shat-storm started a’blowin’ after my blog post yesterday about CARLOS PEDRZA being banned from AXACON and then asking ALEC PETERS to refund the $413.50 Carlos lost buying a non-refundable plane ticket!  So much came out yesterday that, unfortunately, I need to do a follow-up to clarify, explain, and respond to a bunch of different items.

Technically, Carlos never purchased a SphinxCon ticket and therefore was never refunded for it being canceled.  Dave Weiner has made clear to Carlos that he will not be banned from SphinxCon should he choose to attend.  But neither will Carlos be allowed at Axacon.  That decision belongs to Alec Peters and has been made.

That was, of course, the one-third of yesterday’s blog that I spent illustrating exactly how Carlos skews the truth until it becomes a lie, actually showing the transformation with screen caps.  I understand why none of these folks said anything about that, as any acknowledgement by them that Carlos Pedraza isn’t reporting the truth, the whole truth, and nothing but the truth puts all of their derisions and accusations against Alec Peters and Axanar on very shaky ground.

So instead, in a perfect example of “the best defense is a good offense,” Carlos and the detractors tried to punch a hole in the one thing about my reporting that they felt they had a chance with.  Let’s go to the screen cap… 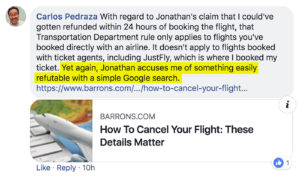 And thus has Carlos Pedraza’s magical poison keypad created yet another purposely misleading and inaccurate statement.  Apparently, I’d “yet again” accused Carlos of something that can be easily refuted with a simple Google search.  This implies:

I also went on to say, “Of course, perhaps Carlos had booked his flight days or weeks in advance.”  So I was giving Carlos the benefit of the doubt that he was/is, in fact, out $413.50.  I simply wanted folks to know that, for people who book their flights directly through the airlines, they do get a 24-hour window to cancel with no penalty.  So had Carlos booked his fare in the intelligent, non-gullible way, he wouldn’t be out more than four hundred bucks.

Yesterday, on Facebook, I explained to Carlos (in a mostly civil exchange) that typically, the airfares presented on sites like JustFly and Kayak and Travelocity and CheapOAir are nearly the same as those from the airlines themselves.  Sometimes, they’re the exact same, or at most $3 or $5 or $10 different.  The “agent” websites can’t be any less expensive than that otherwise they would go out of business, losing their commission fees (1-3%) to the discounts they provide.  So in general, my recommendation to Carlos (and others) in the future is to use a site like Kayak to find the least expensive flight(s) and then go directly to the air carrier’s website to book the flight directly.  It’s worth the extra few bucks to have that 24-hour cancellation buffer. 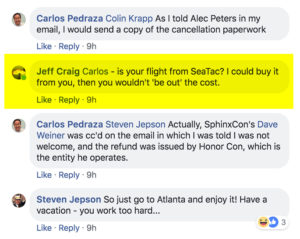 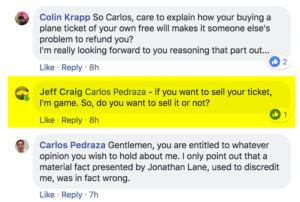 Depending on the level of pass James is offering, this could be deal worth anywhere from $40 all the way up to $1,000!  If it’s the latter, that might be worth the fees to change the plane ticket from Atlanta, GA to either Albany, NY or Burlington, VT.  Hopefully, there won’t be too much snow up there in the Adirondacks in December.

It was also interesting to notice the other “go back on the attack!!!” strategy employed by Carlos and the detractors: calling Alec a “coward” for not letting a “critic” attend his convention… 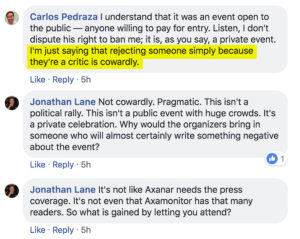 Here, I think Carlos and his followers are just not getting it.  This has nothing to do with “fear” and is instead all about putting an unruly toddler into time-out.  There’s a party happening in two weeks.  One of the kids has been misbehaving and acting out almost constantly, making fun of the child hosting the party, teasing him, and getting other kids to pick on him.  Why should that misbehaving little boy be allowed to go to the party?  He hasn’t earned the right.  If anything, he’s done the opposite.

I’m not sure if Carlos will “learn and grow” from this experience.  My suspicion is that the obsessive need to hunt down and defeat this great white whale might now be indelibly locked into Carlos’ psyche.  But hey, none of us can fix that except for Carlos.  All we can do is give the kid with the bad attitude a time-out and not let him attend the party.  Nothing “cowardly” about it.  Just the adults in the room making the grown-up judgement call as adults are supposed to do.

And honestly, yesterday’s blog wasn’t really about Carlos being banned.  That was only the pebble in the pond, and it’s pretty much a done deal.  As I said in yesterday’s blog intro, had it ended there, I wouldn’t have bothered to editorialize.

No, the reason I said anything was to simply point out the audacity of Carlos Pedraza even suggesting that Alec should reimburse him for the price of his plane ticket to Atlanta…regardless of whether Carlos could or couldn’t cancel it with no penalty.

And to that point, I’ll end this blog by quoting a person I hadn’t expected to chime in on the conversation that Carlos and I were having on Facebook yesterday: BARBARA READER.  For those who don’t know, Barbara has done more for Star Trek fan films that any single individual on the planet (way more than I have!).  Her STAR TREK REVIEWED blog site has indexed nearly every Trek fan film to ever be released!  I rely on it religiously.  Barbara has cancer, and she’s recently brought on a team to help her out.  And I don’t see her postings as often as I used to.  So when she chimed in, both Carlos and I took pause.

Here’s what Barbara said, and then I’ll let her do the mic drop… 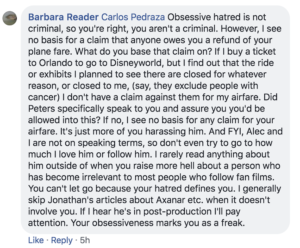