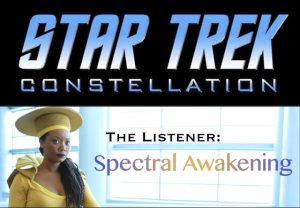 Here is the text to the “shut down” announcement from Constellation:

“ATTENTION, CREW. THIS IS THE CAPTAIN…WE’RE BEING DECOMMISSIONED.”

Yes, you read that correctly. Due to the Axanar lawsuit and the ripple effect from it, CBS is actively protecting their Star Trek Intellectual Property, as is their right, and appear to be ending fan fiction, an activity that was once allowed and encouraged pre-Axanar. Because of this, “Star Trek: Constellation” is ending it’s development and pre-production activities. Please note that we were not contacted by CBS and that this decision is strictly voluntary given the current circumstances.

I want to thank you all for your enthusiasm and support. Over the many months that have gone by we’ve put together a solid team and an exciting first episode script. I truly regret that Decker’s backstory will not get to see the light of day, at least in the immediate future. If the Trek fan film climate changes, either by a favorable Axanar verdict or a change of direction at CBS/Paramount we may yet fly again. But, in the meantime, grab some chips, your favorite beverage, tune in to Netflix and give “The Doomsday Machine” a good viewing. My production company, Cakepop Ninja! Productions, is actively working on original projects so look for a Facebook page shortly and keep an eye out for updates.

May we meet again soon and from all of us to all of you, “Live Long and Prosper.”

All The Best,
Joe Geragi

And here is the text to the “name change” announcement from the newly re-christened The Listener: Spectral Awakening:

When we set out to create this series, we were inspired by the character Guinan from Star Trek: The Next Generation, her unexplored backstory, and her contentious (yet never explained) relationship with Q.

Once we began writing, we realized we were creating a story that, though inspired by Star Trek characters, had now become an original story of our own creation. Guinan’s home planet was named “El-Auria” by Star Trek writers, but that planet was never explored on screen or described in detail. So we created the home planet for our main character, and that’s where our story takes place.

In light of the recent occurrences of CBS and Paramount cracking down on Star Trek fan films, we have decided to fully clarify what our series is– It is an original scifi story that is inspired by Star Trek characters. Because of this, we will move forward with shooting our trailer (which we are in the process of casting) and putting together a pitch video.

To reflect all this, we have decided to rename the series:

At its core, this is still the story of a young alien woman who begins to discover her untapped power, at the crux of fulfilling her familial obligations, being tempted by an unknown power, and holding onto the love of her life. This story comes from our hearts, minds, and imaginations, and we are so thankful to Star Trek TNG for the initial inspiration. But we feel these characters are our own and will continue to move forward with our project.

So THANK YOU for your support, and stay tuned to our page for our upcoming trailer! Please share our page with your scifi fan friends.

May you have everlasting balance,
Aliza Pearl and Lamar Perry