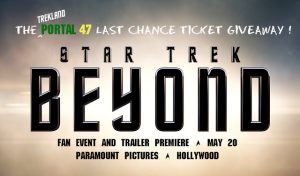 I’ll be going to the big Star Trek Beyond fan event on Friday at Paramount Studios where director Justin Lin will be screening the brand new trailer…followed by a Q&A session.  And just wait’ll you read how I managed it!

“Isn’t the new movie just going to suck like the last two,” you ask?  Well, I actually enjoyed both of the previous films, even if I didn’t like them (yeah, try to figure out THAT statement, kids!).  But I’m not going to this event just because of Star Trek Beyond.  I’m going because, as a longtime fan who grew up 3,000 miles away from Hollywood and can now drive there in about twenty-five minutes (or two hours in Friday rush hour traffic!), I just get a rush walking onto the Paramount lot for a big Star Trek media event!

In future blogs, I’ll tell you guys how I became a “professional Trekkie” and used to visit Paramount fairly often.  So it’s not like I’ve never been before.  But it still feels so geekily awesome to me!  I went to the premiere of the 2009 Star Trek movie at the historic Paramount theater, and four years later, I sat in a screening room at Paramount with Rod Roddenberry, Dave Rossi, and a bunch of other Trek luminaries to get a special advance sneak peek at Star Trek Into Darkness.

So when I heard about this Star Trek Beyond event happening on May 20, even though it’s just for a trailer that’ll be released online a day or two later (if that), I just wanted to be there.

My old tricks for finagling my way in weren’t panning out this time.  Passes were being more carefully doled out, and my old contacts either didn’t get enough extras or else had already chosen their plus-ones to accompany them.  There was a sweepstakes at StarTrek.com for a small number of passes, but trust me, there’s a LOT of Trekkies in Los Angeles!  Those were really long odds, and (spoiler alert) I didn’t win any passes from them.  A good friend of mine won two passes, but by the time he posted to Facebook and I found out, he’d already invited his own guest.

By last Friday, with just a week left, I began to give up any hope of pulling off the hat trick and going to my third special Paramount Star Trek event in a row.  Oh, well.  I still have a wonderful wife, an amazing little boy, and an awesome blog!  I don’t need to schlepp through traffic over to Melrose Avenue and Gower on a Friday afternoon for some silly Trekkie event in order to be happy.  (Yeah, I kept telling myself that.)

Just before heading to bed last Friday night (well, it was technically now Saturday morning at about 1am), I saw a link on Facebook to Larry Nemecek’s TREKLAND blog site (check it out).  It seems that Larry had some extra passes to give away…five, in fact!  And this time, it wasn’t just a simple random sweepstakes.  Larry was going to ask a question and award passes to the five most creative and original answers.

What is another aspect of the Kirk-era “Prime” universe that you feel should ALSO be a change seen in the current alt-verse Trek feature films?

I read it again.

Um.  Well…hmmm.  Maybe this wasn’t going to be as easy as I thought!  And to make matters worse, Larry added a footnote: Random or not—in the alt-verse, Vulcan is gone, Amanda is dead and George Kirk died early; Kirk was born in space, Chekov was born four years earlier, and the Enterprise and most all tech is vastly more advanced than their Prime equivalent at the same time due to the  leapfrogging info downloaded off the century-later Narada. SO—what’s an aspect of the Prime timeline that you WISH was changed in the alt?

And apparently, no JJ-verse haters allowed.  So what about the “Prime” Trek universe would I possibly want changed?  After all, I LOVE the “Prime” universe.  I wouldn’t change a thing!  But if I wanted to win that pass, I had to think of something…

And then it hit me!

Creative!  Original!  Gosh, once this idea came into my head, it practically wrote itself!  Ten minutes later, I hit “send” on what I was certain would become one of the winning entries.  I just knew it!

And this is what I wrote…

Harry Mudd should be the richest man in the Federation.  In the alt-verse, he won.  The ultimate swindler actually managed to get all the marbles, and now he’s a big tycoon.  He’s built up a vast empire of pleasure planets catering to all sorts of vice.  But at heart, he’s still a con man.  In fact, he actually has a lot less wealth than he pretends to have, but he’s so good at hiding the truth that the entire quadrant believes that Mudd is HUGE!!!

And that’s when Mudd tries his hand at running for the position of president of the Federation.  He builds support by stirring up animosities between alien races, vilifying the neighboring Klingons as plunderers and rapists, wanting the Tholians to use their web-fields to build a gigantic wall along their border with Federation space, saying he’ll impose high tariffs on the Orions, calling for a temporary ban on all Romulans entering the Neutral Zone until the Federation Council can figure out what’s going on with the whole looking-just-like-the-Vulcans thing, and outlining a vague “Federation First” strategy that really seems to strike a chord with angry member planets sick of getting the short end of the galactic stick.  He appeals to a heretofore hidden xenophobia that the dream of the Federation had only masked while it lingered just below the surface.

Amusingly, we later discover that it was Harry Mudd who designed and supplied the skimpy uniforms worn by the the women in Starfleet.  It turns out he’s a major distributor of clothing throughout the Federation…along with supplying beverages and steaks for starship mess halls.  Calls for him to disclose his tax returns are met with protests from Mudd that the Federation doesn’t even use money, so why and how would he even pay taxes…and to whom? 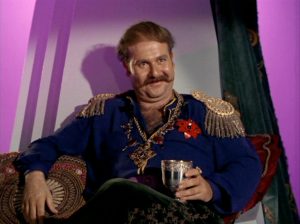 Most shocking, though, is another change from prime-Trek.  In an unexpected twist, we discover that the strange hair on Harry Mudd’s head that everyone had simply assumed was an old, rejected toupee from some commercial spokesman from the early 21st century is actually a life form!  In the alt-verse, Tribbles are now super-intelligent symbiotic parasites and bent on galactic domination.  We discover that the Tribble King has taken over the mind of Harry Mudd, who would otherwise have simply been content to remain in Mudd Tower on Alpha Mudd IV.  But with this evil, furry, purring creature sitting on his head, Harry has no choice but to work toward achieving galactic chaos and plummeting the Federation into a self-destructive tailspin that will leave the terrible tribbles triumphant!

(Prepare for a presidential campaign full of Mudd slinging!)

And with that, Jonathan’s going to Paramount!  I found out from Larry yesterday afternoon.  I’ll try to take some pictures and do a write up, folks.

6 thoughts on “Jonathan’s going to the big STAR TREK BEYOND event at PARAMOUNT STUDIOS!”