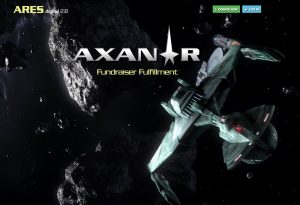 Perhaps the second most problematic aspect of Axanar (after the lawsuit) is the fulfillment of perks (or lack thereof) to the backers of their three crowd-funding campaigns.  Two years after their second Kickstarter, which raised a jaw-dropping $638,000 from supporters, perks have still not gone out to donors.  Fortunately, that is about to change with the final completion of the back-end Ares Digital 2.0 accouont management system.

Their first Kickstarter, which raised $101,171 that was used to create the short film Prelude to Axanar, had 2,123 donors who were each entitled to one of ten different reward levels of different combinations of perks from patches, posters, and T-shirts to the DVD or Blu-Ray of the short film itself (along with special features).

Now, that might not sound like too much to get mailed out, but take a look at this photo…

That wall of boxes represented a full day of work by a half dozen volunteers (sorting patches, rolling and stuffing posters, folding T-shirts, packing boxes with different combinations of all of the above and more)…and it was less than 10% of the total number of packages that had to go out.

And what made the job fifty times harder was that the donor information had all been routed through a service called Backerkit that pretty much scrambled everything.  Axanar‘s “Goddess of Fulfillment” Diana Kingsbury endured horror story after horror story trying to organize the mess of donor data that came out of the Backerkit service.

Another snag in the fulfillment saga was that many Prelude to Axanar backers had donated at levels which included the DVD or Blu-ray of Prelude to Axanar.  And although the short film itself had been finished by the summer of 2014, the DVD and Blu-ray weren’t pressed and ready to send out until a year later.  And so it was that many Prelude backers got their final perks over a year after donating (all perks for that first campaign have now been fulfilled).  The entire process was embarrassing and quite frustrating on both the Axanar side as well as the fan side.

To try to avoid these hassles on their next Kickstarter, the Axanar team decided to avoid Backerkit altogether and instead develop their own proprietary back-end system to collect, sort, and manage all of the user data….including generating packing lists and mailing labels for each donor.  The system, dubbed “Ares Digital” was to be the brainchild of now former Axanar marketing director, Terry McIntosh.  A highly skilled programmer based in Washington state, Terry planned for a robust system that would not only handle present and future Axanar donors, but it could also be monetized in the future to serve other crowd-funders to help track their own backers and perk packages.

And Ares digital would certainly be welcome and sorely needed.  Axanar‘s second Kickstarter in the summer of 2014 had 8,548 backers (four times as many as their first Kickstarter!).  The following summer, a third campaign–this time on Indiegogo–added another 7,660 backers!  So with well over SIXTEEN THOUSAND donors to keep track of, at all different levels and combinations of perks, the need for a solid and reliable account management system was imperative.

Fortunately, Terry McIntosh was all over it…at least at first.  Ares Digital quickly got to a point where donors could track their donations and update their information within the system.  Indeed, before long, Ares Digital could be used by supporters during periods without active crowd-funding campaigns to donate for special limited-time perk offerings.

In anticipation of Terry completing the back-end, donor volunteers (including myself and–at the time–my almost five-year-old son Jayden) got together at Ares Studios in July of last year to start preparing perk packages to be mailed out…

Unfortunately, as the months wore on, Terry’s progress on Ares Digital slowed to a crawl.  Although all the data was nicely collected within the database, there was no way yet to get it OUT of the database.  In other words, despite having thousands of packages ready to mail out (containing every perk except for the DVD/Blu-ray of the completed full Axanar feature film because–well–they haven’t made it yet!…oh, and no tunics yet, either, but only a few donors will be getting those), there was no way to generate packing slips and mailing labels for them!

Again, very frustrating.  And what was worse was that Terry was buried in paying work (and then a new job) and didn’t have time to devote to his volunteer project for Axanar.

As the months went by, the relationship between Terry and Alec Peters of Axanar deteriorated rapidly and seemingly beyond repair.  I won’t go into he said/he said details of their often-public conflicts, but suffice it to say that a few months ago, Terry walked away from both Ares Digital and Axanar completely.  Unfortunately, that left the Axanar team still unable to “liberate” the 16,000+ names and addresses and perk lists from the system onto labels for mailing.  Ares Digital had become the “roach motel” of donor data!

But all was not lost…

San Francisco-based Axanar supporter, Bill Watters, is also an accomplished programmer and was eager to help out.  Despite the project being a major undertaking, and despite needing to start essentially from scratch recreating Terry’s work, Bill managed to build an even better and more robust account management system, according to Alec Peters, in just 2 months.  (Terry had been working on the project for approximately 10 months.)

The only thing delaying perk fulfillment now will be the speed at which donors log in to the new system with their e-mails and old passwords (and yes, there’s a “Forgot Password” button) and enter in their current mailing address.  The new 2.0 system also now asks for gender and shirt size, as Axanar has begun creating both men’s and women’s T-shirts in multiple sizes.

So it you’re an Axanar donor and finally want to get your darned stuff already, click on the link below…