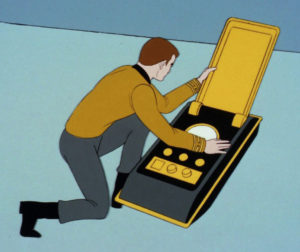 Two weeks ago, I discussed how Project: SMALL ACCESS needed to grow in order to give the group any reasonable leverage in trying to convince CBS and Paramount to revise the “no ongoing fan series” portion of fan film Guideline #1.  Since then, we’ve added about 40 new members (3% growth)…which is certainly a nice start.  But we need to grow a LOT more than that, my friends!

Needing advice from people more experienced in guerilla marketing on the social media front, I sought the assistance of Lee Quessenberry, who had helped with the online marketing efforts for Axanar during their Kickstarter and Indiegogo campaigns.  One of the first things Lee did was to set up a HEADTALKER campaign for SMALL ACCESS.

It’s pretty simple.  People sign up to allow HeadTalker to send out a single post from one (or more) of their social media accounts—Twitter, Facebook, LinkedIn, Tumblr—on a certain day at a certain time.  With enough simultaneous posts, the message will “trend” and get a boost.

For example, here’s the message you would be agreeing to share (it would be posted automatically for you) on June 13, 2017 at 12:00pm Eastern Time:

“We want to change the Star Trek #Fanfilm Guidelines. Follow Small Access Trek to find out how you can. https://hdtk.co/VSsvF“

There’s only one catch: we need 500 people to sign up to share this message or it won’t get sent out.  Right now, we’ve got 67 (which, according to the Headtalker page, gives us a social media reach of 941,141…assuming everyone’s contacts read the message).

3. On the pop-up window, click the “Add Support” button.

And you’re done!  Simple as that.

Can you please help us?

7 thoughts on “Could you do me a favor? It’ll only take you three clicks!”