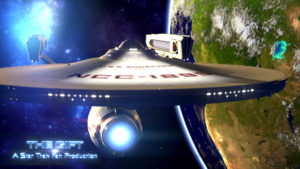 Okay, I know we’re not supposed to call it a “fan SERIES.”  After all, the guidelines specify that there are to be no ongoing fan series.  So instead, POTEMKIN PICTURES is simply producing a series of fan films, each with a different title, and each produced by a different production crew.

However, for the last 15 months or so, the Potemkin Pictures website had displayed an additional production crew (for the Endeavour) with no episodes released yet.  I assumed this was for a new series of fan films featuring the crew of the USS Endeavour (and it turns out I was right), but why was there such a delay?

I asked show-runner RANDY LANDERS about the long production schedule:

We filmed last June, and it took two extra months because of the extensive green screen work, some camera choices that had to be corrected in post, and because we were looking for fans who had an infant, who live nearby, and who would be willing to have their child on camera.  Our longer productions take 9-12 months.

Still having struggles with the green screen. But getting better.

I hope y’all enjoy it. It is good family fare.

You care judge for yourself, folks.  Take a look at the first effort of a new fan FILM (don’t call it a fan SERIES!) from the Endeavour Production team…