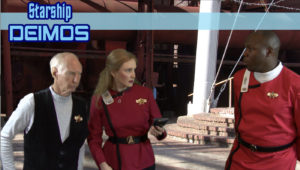 POTEMKIN PICTURES now produces five active fan series (even though they don’t call them “fan series,” since the guidelines don’t allow those) plus another two with episodes in post-production, plus the 36 episodes of the completed Project: Potemkin fan series.

You might remember back in early March when Starship Tristan released two new episodes (their 11th and 12th productions) within a week of each other.  Now its time for Tristan‘s sister series, STARSHIP DEIMOS, to have two releases, this time just five days apart!  In this case, it’s Deimos’ 6th and 7th episodes.

Prior to these two, the last fan film to come from the Deimos Production Crew debuted nearly a year ago.  The reason for the delay, followed by the quick double release, was that show-runner and main editor RANDY LANDERS (who also directed both of these latest releases) had quadruple bypass surgery last August, and much of the work had to be pushed back.

These latest two episodes could not have been more different from each other.  The first, “Prodigal Daughter,” takes place mainly on a Klingon battlecruiser and features “action” fight scenes (hey, those aren’t as easy as they look!), and it focuses on a single member of the Deimos crew.  At the end of the episode, we are told there is also a new captain on board, even though we don’t meet him yet.  The previous captain, Jeremy Quinn, was played by actor TERRY SELF.  The new captain, Mark Stone, is played by TONY ANDERSON, taking his place as one of the few black actors to command a starship in Star Trek fan films.

The second episode, “Shattered Sky” (which actually shows the new captain), had scenes filmed on location at a historic landmark in Birmingham, AL, other scenes filmed on their bridge and lounge sets, and still others in front of green screen with composited backgrounds.  Nearly all regular members of the crew were featured throughout.  So it was a pretty ambitious production, all things considered.

Also, Potemkin Pictures has begin to use ADR (voice dubbing) to record dialog separately into a microphone after a scene is filmed.  The process results in clearer sound quality, but sometimes the words don’t synch perfectly to the lip movements.  Oh, well…it’s a fan film, the The Avengers.

You can view all of the Potemkin Pictures releases on their website.