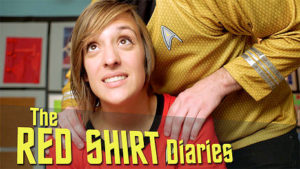 By now, most of you reading this will have heard that CBS has announced the newest Star Trek TV series (after the one with an old Picard), will be an animated COMEDY made up of half-hour long episodes written by Emmy-winning Mike McMahan (of Adult Swim’s Rick and Morty).

The announcement took a lot of fans by surprise, and I’ve seen mixed reactions so far.  After all, a series focusing on the humble ensigns and crewman on the “lower decks” who actually keep the ship running with menial tasks…and making it a Star Trek comedy???  Something like that has never been done before!

As soon as I read the description of the concept, I immediately thought of one of my all-time FAVORITE Star Trek fan series: THE RED SHIRT DIARIES.  It ran from September 2014 through January 2016 and produced 30 hilarious short episodes plus an almost equal number of specials, sneak peaks, and light-hearted behind-the-scenes vignettes.

Much like potato chips, I guarantee you won’t be able to watch just one episode.  Let me prove it to you…

Wanna see more?  All of the episodes have been collected in the order they debuted here on this YouTube playlist.  You can actually binge-watch the entire series in less than three hours!

What makes this series fun, creative, and unique is the fact that Ensign Williams (played by the amazingly talented ASHLEY VICTORIA ROBINSON) is NOT directly involved in any of the missions that we TOS fans have seen a thousand times. And yet she is involved… in her own way.  A poor player strutting and fretting her hours behind the stage, Ensign Williams is stuck on Deck 7, commenting in her logs on what is going on.  And her insights and observations are hilarious… as are guest appearances by certain fellow crew members and other colorful and familiar faces like Trelane, Harry Mudd, and Balok.

I conducted the following interview for my original “Fan Film Friday” blog with Ashley and her co-creator JASON INMAN back in early 2016, just as they were wrapping up their series.  I’d actually been looking for an opportunity to re-publish this interview here on Fan Film Factor, and the announcement of the new animated Star Trek comedy series Lower Decks seemed like a perfect time…