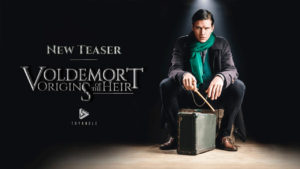 The news has been spreading through the fan film community faster than a snitch through a quidditch match!  According to a rapidly-expanding plethora of online sources, Warner Brothers studios, which owns the movie rights to the HARRY POTTER franchise, have given approval to the producers of a high-quality fan film titled VOLDEMORT: ORIGINS OF THE HEIR to be made.  The only conditions: the producers must make no profit, and the completed project can only be shown for free via YouTube.

This didn’t seem to be the case last July when Warner Brothers shut down the Kickstarter page for this project.  The production had already successfully funded a $30,000 campaign, but faster than you can say “Expelliarmus!” all trace of the campaign was gone, replaced by a pretty harsh sounding notice:

Description of infringing material: It recently came to our attention that users on your site, at the link(s) below, were contemplating a project that violates Warner Bros.’ rights. We have discussed it with the users who have agreed to remove the project from the site and have requested that we send this notice so that the project is removed. I have a good faith belief that the project is not authorized by Warner Bros., its agent, or the law. Accordingly, please act expeditiously to remove or disable access to the URL listed below.

In fact, some fans actually thought there was some sort of litigation (apparently, there wasn’t), and even Wikipedia erroneously reports that in their entry.  (Look quick, before they fix it!)

But then this happened…