In Part 1, we took a look at the story behind PARAGON’S PARAGON, the first “major” Star Trek fan film to be produced…way back in 1974. It wasn’t the first Trek fan film ever; those were being made when TOS was still in first-run (like THE THING IN THE CAVE from 1967). But writer/director/producer JOHN COSTENTINO, a carpet-layer from Warren, Michigan, spent $2,000 of his own money (the equivalent of $11-15,000 today) to build multiple elaborate set replicas of the bridge, transporter room, turbolift, and other parts of the starship Enterprise (or, as he renamed it, the U.S.S. Paragon).

John based his story on the James Blish Star Trek novel “Spock Must Die!” released by Bantam Books in 1970. His characters were the same, only with different names like Captain Richard Kirk and Mr. Sellek. The final film ran 100 minutes and was shown for a number of years at various Star Trek conventions. But as time went on, this seminal piece of Star Trek fan film history slowly disappeared into obscurity. John wrote some behind-the-scenes articles with a few black and white photos, but for the longest time, if you wanted to see any part of Paragon’s Paragon, that was pretty much it

In 2012, one fan posted about 8 minutes of Paragon’s Paragon highlights on YouTube, but the voice dialog was gone, replaced by a sound track of simple Trek background music. It was enough to get a taste of what Paragon’s Paragon looked like, just not what it sounded like.

The following year, John Costentino himself posted a low-resolution video of Paragon’s Paragon bloopers to his blog site. Those appear below…

Still, for fans wanting to get a true feel for this fan film, there simply wasn’t much available. But then, in April 2021, the same fan who had posted those 8 minutes of highlights, ROBERT LONG II, unexpectedly posted a new, longer version…this time with restored audio! Although still not the entire 100-minute fan film, the two 15-minute parts show the first 25 minutes plus 5 minutes of “next week on Paragon’s Paragon.” You can view the two videos here…

Intrigued by this mystery fan, I reached out to him through his “1966tvbatman” YouTube channel. Robert was happy to chat, and here’s what he had to say…

END_OF_DOCUMENT_TOKEN_TO_BE_REPLACED

Back when I initially started blogging about Star Trek fan films, the very first blog I published was about the 1974 fan production PARAGON’S PARAGON from show-runner JOHN COSTENTINO. Some folks mistakenly assume this was the first-ever Star Trek fan film, but those have existed since Star Trek TOS was still airing first-run episodes. In fact, I recently discovered the remnants of a silent fan film from 1967 titled THE THING IN THE CAVE that used actual props and tunics apparently borrowed from those used on the Paramount set! A more high-end Star Trek fan film was pitched directly to GENE RODDENBERRY by a film school student back in 1968, and Gene was all for it, but a Paramount studio lawyer nixed it.

But by 1974, things were much different for Star Trek. The original series had been off the air for half a decade, and while a small but well-produced series of 22 animated episodes featuring the voices of most of the original cast was airing from 1973-74, nothing much else was happening with Star Trek at the time. Well, I shouldn’t say “nothing.” As TOS reruns grew in frequency on television in the early 1970s, Star Trek conventions had just started to become popular beginning in 1972, attracting a few thousand fans, and the word “Trekkie” was entering the colloquial vernacular (usually describing an obsessed and nerdy fan who would use terms like “colloquial vernacular”).

But in 1974, Trekkie fans were still starving for new Star Trek content. With Star Trek literature limited to episode adaptations by author JAMES BLISH into novelized anthologies plus one original story titled “Spock Must Die!” released by Bantam Books in 1970. With no other original stories of Kirk, Spock, Bonesm and the crew, Trekkies created their own underground fan fiction using typewriters and distributing their original tales person-to-person at cons. Most of the mid-1970s fan-produced paraphernalia like the U.S.S. Enterprise blueprints and Technical Manual were still a year or more away.

Into this “desert” of fresh Star Trek content in 1974 walked a carpet-layer from Warren, Michigan named John Costentino. In additional to having interests in being an artist, engineer, and amateur filmmaker, John was also a huge Trekkie. And he would go on to produce what might not necessarily be the first-ever Star Trek fan film but is undeniably the first MAJOR Star Trek fan film with elaborate sets, costumes, lighting, make-up, a 65-page script, and a run-time of 100 minutes. John spent nearly $2,000 of his own money on the project (that’s about $11-15,000 today!), about half of which went to building sets like a recreation of the Enterprise bridge, transporter room, and turbolift.

Originally shot on Super-8 film, the film was shown at conventions for a few years and ultimately transferred to a limited number of VHS tapes. But as the years passed, this important piece of Star Trek fan film history passed into oblivion. Or so we thought…

END_OF_DOCUMENT_TOKEN_TO_BE_REPLACED 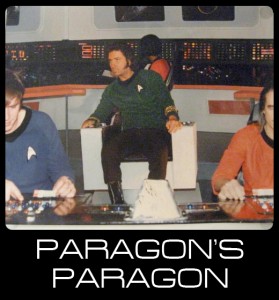