But one fan series in particular, DREADNOUGHT DOMINION, has bucked that trend. Granted, over the past half-decade of releasing fan films, not everything from Dominion has been a light-hearted, tongue-in-cheek romp. In fact, their first couple of episodes were completely serious, as was the recent “Redemption at Red Medusa.” But mixed in with those offerings were a series of humorous vignettes like “Reality Check” (which broke the 4th wall) and “Technical Difficulties.” Both of these short fan films featured actor JOHN SIMS playing a crewman named Quincy…who turned out to be a member of the Q Continuum. The character is mysterious and compelling—and quite a bit mischievous—all at the same time.

Quincy makes is third and most significant appearance in the latest Dominion vignette, “A Barrel Full of Quincys,” and it’s quite a hoot! John Sims gets to show off his range of celebrity impersonations in a short film with rather impressive production values. Check it out…

I asked John what his impression of the episode was (get it?), and he typed back in a very British accent (he’s actually from Worcester, Massachusetts and currently lives in Florida, but he’s a self-declared Anglophile):

I enjoyed the opportunity that Gary and Randy gave me. They are alright blokes with great sense of humour!

Indeed they are! GARY DAVIS and RANDY WRENN are the show-runners for the Dominion fan series, and I spoke to Gary recently about what went into creating this latest vignette. Turns out a LOT more work went into crafting this little short film than you’d suspect…!

END_OF_DOCUMENT_TOKEN_TO_BE_REPLACED 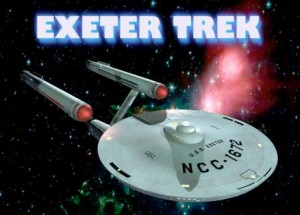