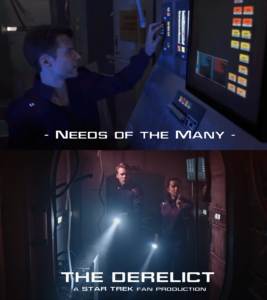 Fan films like Star Trek: Horizon, Prelude to Axanar, Star Trek: Renegades, Star Trek Continues, and New Voyages have been viewed millions and millions of times on YouTube….and with good reason.  All are excellent productions of professional-level quality.

But those are the “big fish” in the fan film pond.  Two much smaller fish have swum underneath the sonar and haven’t been noticed by more than a couple of thousand viewers each…which is a shame because they are two of the best, highest quality Star Trek fan films you’re likely to see!

They didn’t have mega-budgets like some fan films, nor did they use big-name Hollywood actors or Trek veteran producers.  In fact, there isn’t even a VFX space shot in either.  What’s more, neither violates any of the fan film guidelines, coming in at 6 and a half minutes and 12 minutes respectively.

The first of these two films, THE NEEDS OF THE MANY, was released in January of 2016 (five months before the guidelines were ever announced) and the second, THE DERELICT, debuted just last month on the 51st anniversary of Star Trek.

Both short films take place during the Enterprise NX-01 era and use real, practical sets instead of green screen.  The costumes look amazing, and the actors do a really spectacular job.  Add in subtle lightning, great make-up, excellent camera work, a strong script, solid directing, and even top-notch editing, and these two fan films can easily take their place among some of the best ones so far.

So who made these two masterpieces, and how did they manage to do such a FANtastic job for so little?  For the answers, we need to travel all the way to the land down under…