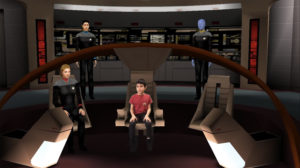 As a dad myself, I have to admit to feeling a kindred spirit when I first found out about CERBASI TREK – THE SEARCH FOR NICHOLAS.  The Cerbasi family lives in the town of Reading in the United Kingdom.  “Captain Daddy” WAYNE CERBASI has two sons, PETER (almost 12-years-old) and NICHOLAS (9-years-old).  And a few months ago, they made a 16-minute Star Trek fan film.

We’re not talking Star Trek Continues or Axanar here. This was just a fun little project for a father to do with his two kids.  And that’s what fan films are all about, right?  FUN!  And hey, if you can bring a few new fans from the “next generation” into the fold, so much the better.

Much of this film is done in “machinima” style, which is a production technique where the filmmaker records computer graphics rendered in a video game engine (like Star Trek Online or Elite Force or Bridge Commander) and edits them to tell a unique story with characters and space scenes…all without having to know how to create actual visual effects.

Machinma fan films have existed 1996, when a filmmaker used the first-person shooter game Quake to create a video short story called “Diary of a Camper” with game scenes and text-based dialog.  Since then, many Star Trek fan films have used the technique, including, for example, the multi-episode Borg War.

Most machinima-based Trek fan films use only the video game renderings for all of their scenes.  What makes Cerbasi Trek unique, however, is that this is the first time (that I’m aware of, and I’ve looked hard) that a Trek fan filmmaker has utilized green screen compositing alongside machinima to incorporate real people INTO the computer-generated scenes.  Wayne and his two sons appear with the CGI characters on the virtual bridges, and the result is a really fun-looking adventure…