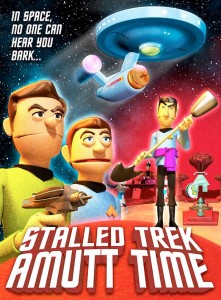 The first thing that I noticed about Stalled Trek: Amutt Time was the amazing quality of the 3D animation. This really looked like a bunch of puppets/muppets walking around the corridors of a very screen-accurate USS Enterprise (or Second Prize, as it was named in this parody). And parody is an understatement! In this hysterical romp through Star Trek mythos, nothing is sacred…and I mean nothing. I won’t give anything away because that’d just steal the thunder from your enjoyment of this 15-minute one-shot fan film from 2012.

But I did manage to track down the creator of Stalled Trek, Mark Largent, and discuss with him the evolution of this “pet” project (that’s a pun you’ll likely get after watching it) and some of the other things he’s worked on…

JONATHAN: First off, Mark, where are you from and what do you do for a living?

MARK: I live in Dallas, Texas and am a freelance graphic designer. I’m a military brat, so I moved around when I was growing up.

JONATHAN: What kind of schooling and/or training have you had to give you the skills to make your animated films…or are you self-taught?

MARK: I was an art major my first year of college, but I ended up getting my degree in broadcast journalism. No proper training for animation other than spending way too much of my childhood and adulthood watching cartoons. I’ve always liked to draw, and making an animated cartoon was high up on my bucket list.

JONATHAN: Are you a long-time Star Trek fan, or did you discover it later in life?

MARK: I’ve been a Star Trek fan since I was in the first grade. This was 1974, and Star Trek was still huge in syndication and the cartoon had come out. All of my friends and I watched TOS religiously after school and then would run around our yards playing Star Trek. For the Christmas of 1975, my grandparents spoiled me and got me most of the Mego action figures and the Bridge playset with the cool spinning transporter. Unfortunately, I had a spiteful collie that resented the fact that my mom had started working, leaving her alone all day, and she chewed up most of my toys. Only Mr. Spock survived. All those monsters and aliens they managed to survive…and the whole crew was wiped out by Lassie!

Man, I wish I still had those.

JONATHAN: When did do you first come up with the idea to do a Star Trek parody? Was it always going to be a parody of “Amok Time,” or did you have some other ideas first along the way?

MARK: In the early 1990s, I had a job recruiting for a residential high school for gifted students and had early access to the Internet. This led me to the Star Trek newsgroups, and I was one of those people who had my own Star Trek home page when the Web was new. It was called “Largent’s No New Star Trek” and was dedicated to the original series. I was a fan of the new Star Trek stuff that was coming out, but the homepage was just TOS stuff. 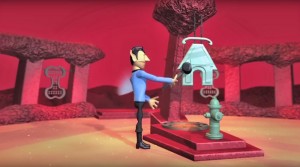 I remember that I was doing something about the fact that in early episodes of TOS, Spock was sometimes referred to as being a “Vulcanian.” I don’t know if it was just from staring at the word too long or a typo or something, but I thought: “Vulcanine.” And then I chuckled and thought Mr. Spott was a good name for a Vulcanine, and then I thought about “Amok Time” and it basically being about Mr. Spock going into heat. Spott was half human, so he was a mutt. It was one of those things that just seemed to build on itself.

As far as making it a parody, I was a huge fan of Mad and Cracked Magazines when I was growing up, so I was predisposed to parody.

JONATHAN: So you had the idea initially back in the 90s. Did you do anything with it at that time, or did the idea just percolate inside your brain?

MARK: The initial idea was to do a Warner Bros. style cartoon. I had this naive idea that it might be possible to do it as a series of animated gifs. Hah!

This was in early 1996, and Flash wasn’t really around yet. So I decided to settle and started doing “Amutt Time” as a kind of illustrated script on my website with illustrated panels and a few animated gifs. I came close to finishing it and was waylaid by my first Star Trek convention. I was living in Mississippi, and they were having a 30th Anniversary convention in Huntsville, Alabama. For my first convention, it was great. The entire original cast was there (the last time they would ever share a stage, we didn’t know then) and after three days, I had Star Trek overload. 🙂

I put “Amutt Time” on the shelf and forgot about it. 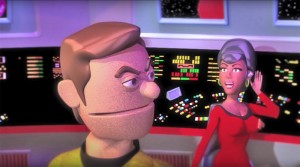 JONATHAN: So when and how did the project get taken back down off the shelf?

MARK: It was still a long journey with many stops. In 2001, I revisited “Amutt Time” and did the entire story as a PDF comic book. I even started a second parody, “City on the Edge of Foreclosure.” But even though I’d done the comic, I still thought of it as something that should be animated. I kept coming back to that over and over again.

In 2004, I saw a story about a 3D animation application that was relatively cheap and thought to myself, “That’s the ticket! That’s how I’ll do it.” I spent a month or so trying to model Captain Krok and gave up in frustration. The learning curve was steep.

I played around with Flash for a while, thinking I might go that route, but I kept hitting a wall.

In 2007, I came back to that 3D animation application, resolved to learn it. I bought some video tutorials and started down the path. I modeled Krok and Spott and part of McGruff and a couple of props. Then I started to feel overwhelmed and thought I’d rather try something else as my guinea pig. And then, when I was better at it, I could come back to “Amutt Time.” That other project ate up all of my time for almost five years, and “Amutt Time” was pushed back again.

JONATHAN: Wow! It’s beginning to sound like “Amutt Time” would never get made! But obviously, it was. So what finally happened? 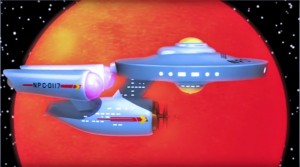 MARK: At the beginning of January in 2012, nearly 16 years after I’d come up with the idea, I put my foot down. I made it my New Year’s resolution to finally do it, and I bought a table at the Dallas Comic Con that was coming in May with the intention of having it ready by then.

There’s a quote I think is very true about committing to doing something. I’m pasting it here:

“Until one is committed, there is hesitancy, the chance to draw back, always ineffectiveness. Concerning all acts of initiative (and creation), there is one elementary truth that ignorance of which kills countless ideas and splendid plans: that the moment one definitely commits oneself, then Providence moves too. All sorts of things occur to help one that would never otherwise have occurred. A whole stream of events issues from the decision, raising in one’s favor all manner of unforeseen incidents and meetings and material assistance, which no man could have dreamed would have come his way. Whatever you can do, or dream you can do, begin it. Boldness has genius, power, and magic in it. Begin it now.”
― William Hutchison Murray

And that’s precisely what happened. Once I committed myself to doing it, all the obstacles that were in my way imagined or real, simply vanished. At that point, it was meant to be and everything seemed to line up to make it happen.

It took all that time and all those false starts, but the first time I got to watch it with an audience at a convention and hear them laughing at an animated cartoon I’d made is an experience I’ll never forget. 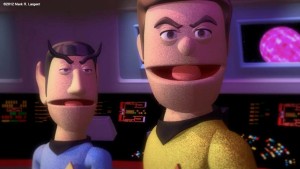 And the most hilarious thing is when I saw that IMDB had me on a list of actors who have portrayed Captain Kirk!

JONATHAN: Did you always plan to do a puppet/muppet-style animation, or did that approach evolve?

MARK: The idea of doing it as puppets was something that had first occurred to me when I was trying to do it in Flash, but I didn’t go very far with it. After doing some 3D animation and realizing just how time consuming it is, the idea occurred to me again.

As it turned out, it was exactly the answer to my problems. 3D animated puppets are much easier to animate! 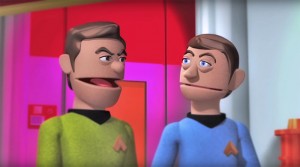 And, even though the idea had started out as a time-saving device, it became something that I think added a lot to the project. Puppets are funnier and there’s none of that “uncanny valley” stuff with puppets [the “uncanny valley” is where 3D-generated characters look almost too real and make viewers uneasy – Jonathan]. To my great surprise, I found I was able to invest more time into the look of the movie. Suddenly it was looking a lot better than I expected it to look.

I’ve been asked why I didn’t do it with real puppets, and I point out that I was able to build my bridge model in the computer in 3 days. It cost nothing to make, and I didn’t have to have a studio to put it in and lights to light it and cameras to film it. Even at puppet scale, that would have been an enormous expense, and I don’t think I could have done it on my own.

JONATHAN: How long did it take you to write the script?

MARK: Here’s the thing. Since I’d done it several times in comic book form, I had a few versions of “Amutt Time” that I could basically transcribe. Some of the jokes that were 16 years old at the time needed to be updated. (Like, I had a joke about a postcard that was changed to email and one about long distance charges that switched to roaming.) But this was a story I knew well, and since I’d drawn it in comic form, I didn’t need to draw new storyboards.

So, the answer is either a few hours or 16 years!

There’s still one gag I should have added that I probably would if I ever revisited it. I have an incidental character that only appears in the animated version called “Lt. Stinger” who shows up a few times to do the dramatic stinger music. I originally added him because I wasn’t going to have any music. Near the end, I have McGruff say something like “Uh-oh!” and I really should have had him do the stinger gag. It haunts me that I didn’t do that.

Next week: in the conclusion of our interview with Mark Largent, we discuss the voice actors, music, and just how Mel Brooks fit into this fan film. We also find out about Mark’s 2012 Kickstarter, one of the earliest crowdfunding campaigns for a Star Trek fan film. And finally, we learn a little about Mark’s other projects and whether “Amutt Time” will ever get a sequel.

In the meantime, if you haven’t already, take 15 minutes out of your busy day and watch Stalled Trek: “Amutt Time”: