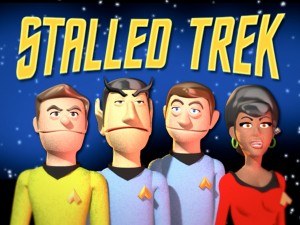 I’m referring, of course, to the 15-minute computer-animated Star Trek parody fan film Stalled Trek and its lone episode, “Amutt Time.” It’s unique in that it features computer-generated puppets as the familiar characters of our favorite starship in a hilarious parody of the second season episode “Amok Time.” In this case, though, Mr. Spott is a Vulcanine (WOOF!) going through heat and needing to return to his home planet for mating with T’Pomeranian. Of course, Mr. Spot is only half-Vulcanine, so he’s essentially a “mutt”…hence, the title.

I won’t say more. Just watch the episode, enjoy the guffaws, chuckle at the inside jokes that any Trekkie will get, and marvel at the amazing quality of the animation. Then come back here for part 2 of our interview with creator Mark Largent, a Dallas native who first got the idea for this project back in 1996 but didn’t actually make the film until 2012. 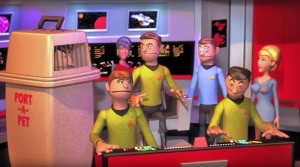 JONATHAN: Which voices did you do, and which were done by others?

MARK: I did all the male voices plus T’Poodle. Lt. Uhiya and Nurse Temple were voiced by my friend Terri Jakubowski, and T’Pomeranian was voiced by my friend Xanthy Sotiriadis. To be honest, doing the voices was partly why I kept thinking it needed to be animated. I’m no Rich Little, but it was fun to imitate those voices. From the beginning, I’d always wanted to avoid the stereotypical imitation of Shatner with all of the dramatic pauses. Like Mel Blanc did with many of his Looney Tune voices, some were pitched higher or lower. T’Pau’s voice had always amused me, and I used it as an opportunity to channel and pay homage to Mel Brooks. 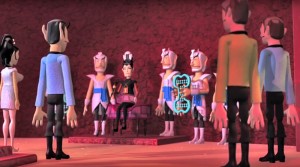 JONATHAN: That bit with T’Poodle doing her speech about “the beginning” was laugh-out-loud hysterical. Truly inspired. So I’m assuming that the voices were all recorded first and then animations done after to match the lip syncing?  Were you folks all together when you recorded dialog or did you all do it separately?

MARK: The dialogue was recorded first. I copy and pasted the lines of dialogue for each character onto a single document and then I recorded each line as a separate file. It was much easier to do one character all the way through than try to switch up. I had to chase down my friends to get them to do the female voices and brought a laptop to them to record. They were in the same room, but they recorded them separately. They were not Star Trek fans, and I had brought Amok Time along for them to see their bits. They both ended up watching it the whole way through and I got a big kick out of that.

It goes without saying that “Amok Time” is one of my favorite episodes even now.

JONATHAN: What program(s) did you use to animate this film, and how long did it take in total to animate?

MARK: The primary application was a little known 3D program called “Animation:Master.” It has a great many things going for it, not the least of which is that it is very affordable! Some things were done in Photoshop and After Effects. I had experimented earlier with coming up with the 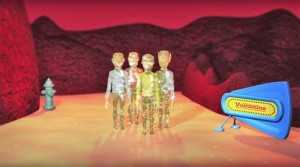 transporter effect and it was a combination of Animation:Master and Photoshop. I created a sort of star field of shiny blobs in Photoshop and mapped that to a transparent cylinder in A:M. Then I animated the cylinder rotating, which gave me some footage of what looked like swirling blobs. The breakthrough was when I found a quote from a memo from Roddenberry suggesting that the figures should come in as a solid color first. That’s the bit that people miss. The figures fade in as a solid yellow first and then fade from yellow to their natural colors.

I started at the beginning of January and finished in early April, I think. I had a bit of a side trip where I was thinking about doing it as a web series with a framing device, and a big freelance job that cost me a couple of weeks, but it was all done fairly quickly. By the end, I was literally sleeping about 2 hours at a time. I’d animate all day and render all night.

JONATHAN: Rich Douglas did an excellent job on the music—it’s very similar to the original episode’s score but different enough not to be a direct rip-off.  Was Rich a friend who volunteered to help out, or did you hire a guy and pay him?

MARK: Rich Douglas reached out to me after the Kickstarter, so he was hired, but he added a great deal to the film. It was very late in the game, and I couldn’t afford to pay him to score the entire 15 minutes, but he gave me some great stuff that I could re-use to fill in the gaps. I’m sure he’d probably never done a score like this one because, not only did I go through the whole movie giving him time codes for when I wanted there to be music, but I linked him to YouTube videos with various bits of the original series music to demonstrate what I wanted. The fight scene music in “Amok Time” is very well known, and that was a make or break for me. Rich is a serious composer, not a comedy composer, so doing parody music isn’t really what he does. But that was okay since the music needed to be dramatic, but the fight scene music had to be familiar enough and I literally got teary eyed when he delivered it.

And now I have my very own soundtrack album I can listen to!

JONATHAN: You just mentioned your Kickstarter. Back in March of 2012, you held one of the earliest crowdfunding campaigns for a Star Trek fan film and raised $2,200 from over a 100 backers…well over the $600 you set as your original goal.  What were the funds used for? 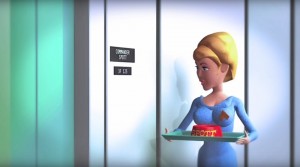 MARK: That quote about providence [from part 1 of this interview – Jonathan] really plays into this. As I was working on animating it, I suddenly realized I wasn’t doing any freelance work and was broke. How was I going to come up with money to make DVDs to sell at the convention??? I had about 2/3rds of the movie done by that point and went to Kickstarter, which was still pretty new back then. The submission process was simply that you emailed them a form. I want to say the goal was to get 250 DVDs made, which was around $600. I figured that, if nothing else, maybe I could get 40 friends and family members to give $15 each. To my great surprise, I almost made my goal in the first 24 hours and, like you said, it went up and up. Nothing compared to the big deal Kickstarters, but I was really blown away. So, I decided to make 1000 DVDs!

I was definitely one of those guys who didn’t think the whole thing through. I didn’t charge extra for overseas shipping, and I had somehow never thought about sales tax and shipping fees from the replicators. Thankfully, I’d gotten a pretty big freelance job during that time and was able to use it to cover the rest of the expenses, including the soundtrack.

Again, it was providence helping me along.

JONATHAN: Are those DVDs still available for fans who’d like to get them?

MARK: As a matter of fact, I still have quite a few! They are for sale here:

JONATHAN: Do you have any plans to produce more Star Trek animated parodies in the future? 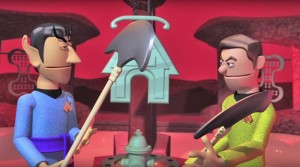 MARK: I go back and forth on this. Had I gotten a bigger response from “Amutt Time,” I think I would have jumped right into the next one. I haven’t really had anybody asking me to do another one. The next one was going to be a parody of “Balance of Terror” and, keeping with the dog jokes, the Romulans would be Ruffulons in their Bird Dog of War ship, and it was to be called “Balance of Terriers.” There was also “City on the Edge of Foreclosure” in the back of my mind.

I might be overcome by the need to do it at some point, but so far, I’ve been able to keep those “ancient drives” at bay.

I do have another Star Trek fan project in the works right now, though. A friend and I have dug up a Star Trek story I wrote and he penciled back in 1992, and he’s inking it and I’m coloring and lettering it. It’s not a parody, but it’s kind of an imaginary story at this point since continuity has changed since it was written. We were hoping to break into comics back in the day and did this as a kind of sample work and as our version of what had happened to James T. Kirk. The Undiscovered Country had just come out as well as the two-part Spock story on TNG, and it seemed that Kirk was not around in the TNG time. We arrogantly set out to do “our” version of what had happened to him. Not long after we finished it, though, an episode of TNG (“Relics”) came along and messed up the continuity for our story, and it’s been sitting in a box for decades. My friend (Mark McCrary) and I were discussing doing something to mark Star Trek’s 50th anniversary, and he suggested that we go back and ink, color and letter the story.

There’s something really bizarre about reading a story I wrote so long ago that I barely remember. It’s like it was written by somebody else! But what I’ve been loving about it is that it’s kind of like getting another chance to visit with these characters again.

You can read it for free at: https://www.facebook.com/startrekfancomic/photos_stream?tab=photos_stream

I’ve been putting up updates 7 pages at a time. By the time you put this up, there should be about 25 pages. It’s around 60 pages total. It’s taking me a long time to color it. We should have it all done and all up by the actual 50th, though. I think we’ll put together a digital download version once it’s finished, as well. 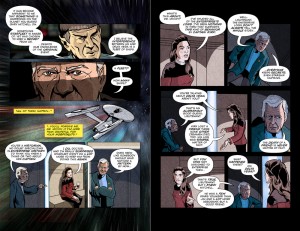 JONATHAN: I’ll be sure to check it out! Thanks again for a great interview and for making “Amutt Time” for the rest of us fans to enjoy.

MARK: Thanks for this, Jonathan! I really hope it helps more Star Trek fans find out about “Amutt Time.” It really is designed for fans to get the most out of.