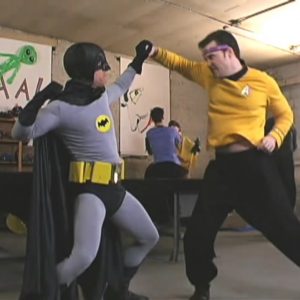 I kinda figured that most of you might be in a bit of a bat mood this weekend. So what better time to take a look at that one-of-a-kind, 55-minute parody fan film mash-up from 2006, Star Trek vs. Batman? (And yes, people, this really happened.)

In a “Making of…” video posted on YouTube , writer/director/producer Christopher Allen explained that he first got the idea for this mash-up while watching a marathon of the 1960s Batman episodes on TV Land. He began thinking about what an epic clash of over-the-top acting styles it would be to pit William Shatner against Adam West.

Of course, for most of us, we’d come up with the idea, laugh for a few seconds, maybe do a bad Shatner and West impersonation, and then move on with our lives. But Christopher was also an independent filmmaker (living in Indianapolis, IN), and he’d already produced a few films. He briefly considered actually trying to make such a project happen—where Batman and Captain Kirk team up in some way—but the idea ended up just sitting in the back of his mind for a few years and didn’t move forward…until 2005.

Earlier that year, Christopher faced a moment of truth in his life as a filmmaker. Circumstances forced him to cancel plans for his latest independent film, In My Life. According to Christopher, “It was really a heartbreaking thing to do. And I thought, well, either I can do one of two things: I can just quit making films, or I can do something that would make me re-embrace the very reason why I got into films in the first place—which was to have fun and to enjoy working on films…lighting it, editing it, and shooting it, all that stuff. Once I canceled In My Life, I went back to Star Trek and Batman. I thought, ‘Okay, well this is a funny concept. Let’s do something with this and have FUN, y’know?’ That was the whole of this project: let our hair down and have fun.” 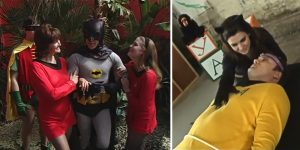 And so Christopher wrote a script in which the Enterprise travels back in time (due to some unexplained space anomaly) to the late 1960s Earth (again!!!). Kirk and Spock beam down, only to be captured by the Joker and Catwoman and fitted with mind-controlling devices. Batman and Robin show up to investigate the “spacemen” whose ship is hovering in orbit over Gotham City and discover the two nefarious villains. But Kirk and Spock are now under the command of the Joker and attack the Caped Crusader and Boy Wonder. Just as Batman and Robin look like they’re gaining the upper hand, the Joker disguises his voice and has the Enterprise beam up himself and Catwoman along with Kirk and Spock. Batman and Robin jump into the beam, as well. But with Kirk giving the orders Joker wants him to, the jester of genocide quickly gains control of the Enterprise and all its weapons. Thrown into the brig, can Batman and Robin find a way to save planet Earth? 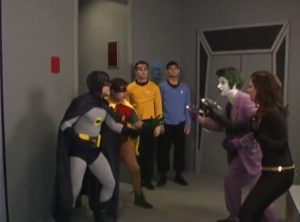 I’ll stop there and let you enjoy the rest, but be warned: it’s super-campy…bordering on downright ridiculous (just like the 1960s Batman TV series). At one point, even President Lyndon Johnson makes a cameo! However, the full movie strives for a balance, and if you watch past the mid-point, the tone does shift into more of a classic TOS feel for the second half. But to get to the “trekkier” part, you’ve gotta make it through the sillier set-up. And if you have too low a tolerance for zaniness and prefer a more serious take on the Batman, there’s a movie out this weekend you can go see. And there’s always Star Trek: The Motion Picture for serious Trek.

Anyway, back to Christopher Allen and his movie…

With a script finally written, now came the real challenge. In order to even get off the ground, Allen needed a lot of things, especially Batman paraphernalia (Star Trek uniforms and gadgets were much easier to find). Fortunately, Allen happened upon a message board for fans of the 1960s Batman series. Once he joined it and began discussing what he needed for his project, the floodgates opened and resources flew his way for costumes, music, and even a custom-built Batmobile! 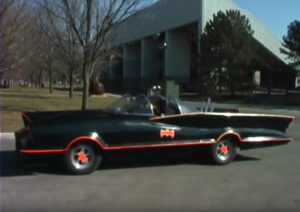 Ah, the Batmobile. Did you know that for a modest six-figure sticker price, you too can purchase your own street-legal Batmobile? Just go to fiberglassfreaks.com and order online! And lucky for Christopher, all of these custom-built, officially-licensed Batmobiles were sitting in a lot just 77 miles north of Indianapolis in a town called Logansport, IN. Lead salesman Mark Racop was more than happy to rent one out for the film…and just like that, Star Trek vs. Batman had an authentic-looking Batmobile!

By January of 2006, Christopher realized, “This is the biggest full-scale production I have ever been involved in!” In his “Making of…” video, Christopher elaborated: “Most of my pieces are contemporary pieces, dramas set in present day where you can shoot in just any kind of atmosphere. But now we had to create the sets. Granted, some of the shots were against the city backdrops, which made it easier. We kinda looked forward to those shoots. But a majority of the sets had to be created.” Fortunately, Mark Racop was able to hook Christopher up with a number of people and resources to help with construction, make-up, design, etc. Christopher recalled, “It was an extraordinary, herculean undertaking. And I mean that; it really was!” All told, including both actors and production crew, there were nearly four dozen names listed in the end credits! 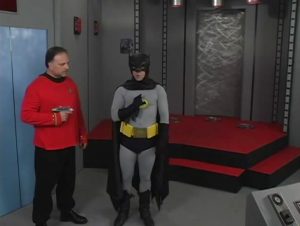 Among the sets that had to be built from scratch were a partial Enterprise bridge, transporter room, corridor, and brig. And while they didn’t reach the amazing level of meticulous replication that the Star Trek: New Voyages and Continues sets have, it’s clear that the construction team (including Christopher Allen himself) worked incredibly hard and did a pretty decent job. Other non-starship sets included the Joker’s lair plus a virtual background of a familiar planet modeled in 3D and composited in behind the actors who were filmed in front of a green screen for a special scene toward the end. (No spoilers here; you’ll just have to watch it.)

The acting is about what one might expect from a fan film shot in Indiana, although many of the actors had previously appeared in other short independent films, and a few have since gone on to even bigger roles. However, a major round of applause should go to Gavin Rulon whose over-the-top performance as the Joker would have made the late, great Cesar Romero (the actor who played the Joker in the 1960s Batman series), well…not quite green with envy but at least a little purple. Also, Victoria Floro (who has actually appeared in small roles in a few broadcast TV movies), did a knockout job as Catwoman/Selena Kyle. 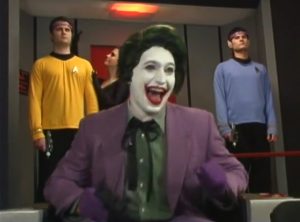 Also quite impressive for a fan film (or even for a regular film!) was the fight choreography. Real-world stunt coordinator Jim Dougherty offered to join the team, tempted by a combination of exciting challenges. The first challenge, of course, was the complete lack of stunt people. The actors would all need to do their own stunts, which would require specific training and rehearsals along with a more limited range of moves. However, actors doing their own stunts also eliminates the need for long or wide shots where the actors’ faces aren’t visible. The stunt coordinator can design fight sequences that last longer and get right up into the camera.

The second challenge would be choreographing fights around props and sets in limited spaces like the Joker’s lair and the transporter room. This led to an interesting solution for the first major fight scene in the villains’ hideout. The tables that Kirk and Spock were strapped to became platforms to take the fight off the floor and add a third dimension to it when Robin jumps from an elevated height to land on henchmen standing on the floor.

But for Jim Dougherty, the most compelling challenge was finding a way to merge the very familiar fighting styles of Star Trek and Batman into a hybrid (of sorts). In a YouTube video about choreographing the fight scenes, Jim commented, “I wanted to create something that the fans were familiar with but still has its own life. I didn’t want to duplicate anything we’ve seen, but we wanted to have some of the signature things that people were expecting, like Spock pinching someone’s neck…Crossing the two shows, and being able to take the style and essence of the Batman fight scenes—which are different than the style and essence of the Star Trek fight scenes—and be able to combine them so the audience goes, ‘Okay, it feels like both shows here.’” 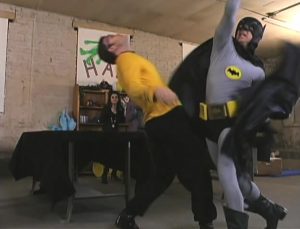 According to the YouTube page on Christopher Allen’s “Making of…” video, Star Trek vs. Batman was later named one of the top five Star Trek fan films of all time by Fanfilm Cinema. I haven’t been able to verify that, and of course, back in 2006, there were not nearly as many Trek fan films and series as there are now. And truth to tell, these days you’ll probably find a host of fan films that you’ll like better than Star Trek vs. Batman.   But that’s not really the point of watching this production, is it? These folks obviously spent an incredible amount of time and effort making this nearly-hour long homage to two wonderful television series from the 1960s. If you don’t take things too seriously, the team’s dedication of the entire production will bring back warm feelings of nostalgia for the days of our youth (at least the olds farts like me!) or just the fun of being a kid and watching the adventures of Batman or Captain Kirk…or as it happens, both!

On YouTube, you can watch Star Trek vs. Batman in three parts starting on this page