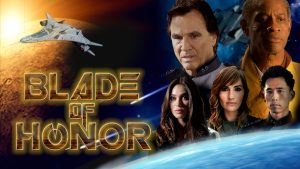 The production talent behind BLADE OF HONOR includes the aforementioned Ryan Husk plus Mark Edward Lewis, Steven Stone, Clayton Turnage, and Jennifer Nash…who combined have over 120 years of experience producing and creating television, feature films, webisodic, and short-form media in Hollywood.  Working on the visual effects are Tobias Richter and The Light Works, Pony Horton, and Tommy Kraft (creator of Star Trek: Horizon).

And if that alone isn’t enough to convince you to help fund this new project, take a look at this trailer they were able to put together even before generating any donations:

Click here to learn more and contribute to their Kickstarter campaign.