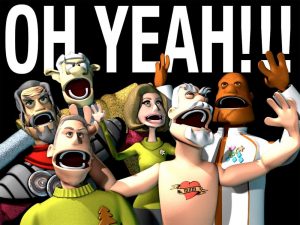 On Friday evening, at a little after 8pm Pacific Time, inside of Stage 31 at Paramount Studios in Hollywood, Star Trek Beyond Producer JJ Abrams shocked the fan film world by announcing that the copyright infringement lawsuit against AXANAR was “going away” and that “fans will be able to work on their projects.”

Here’s video (from the seats in the back–sorry, folks, it’s the best my iPhone could do) of JJ Abrams’ bombshell:

Axanar executive producer Alec Peters had no idea this announcement was coming!  He was seen following JJ Abrams backstage later and would only confirm that he (Peters) spoke with Abrams and that JJ was amicable and positive.  Peters did not share details of what was said.

While we’re grateful to receive the public support of JJ Abrams and Justin Lin, as the lawsuit remains pending, we want to make sure we go through all the proper steps to make sure all matters are settled with CBS and Paramount. Our goal from the beginning of this legal matter has been to address the concerns of the plaintiffs in a way that still allows us to tell the story of AXANAR and meets the expectations of the over 10,000 fans who financially supported our project.

There is still a lot of work to do, but receiving this kind of public support helps immensely.

We’re pleased to confirm we are in settlement discussions and are also working on a set of fan film guidelines.

It is not known at this point if the conditions of the settlement will be agreeable to both parties or if the new guidelines for fan films will be permissive or heavily restrictive.  However, what was clear from the evening announcement is the both Abrams and Lin are solidly in favor of fan films and want to encourage them.  How this will impact any potential attempts by CBS and/or Paramount constrain fan films remains to be seen.

With luck, everyone will win: fans and studios alike.  Keep your fingers crossed!