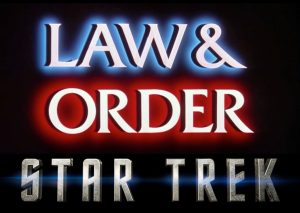 Ironically, in an attempt to “save” Star Trek, the lawyers at CBS and Paramount almost killed it, or at least damaged it severely. During this amazing 50th anniversary when Trekkies and Trekkers should have been coming together to celebrate this amazing, world-changing phenomenon known as Star Trek, fans instead began taking sides and digging in. This lawsuit tore a painful rift among the very people who need to be united in their love of Star Trek in order for the series to continue to live long and prosper.

What’s worse is that, in taking sides, fans stopped being fans and instead began to become copyright police and legal experts. And as my own attorney wife is so fond of telling me, “Jon, you are NOT a lawyer. You didn’t go to law school, you didn’t rack up a lifetime of student debt, you didn’t study for months to pass the bar exam, and you don’t bust your ass for 70 hours each week swimming in a sea of litigation.” (That’s pretty much a quote, folks.)

And yet, suddenly fans were armchair attorneys, sharing their “wisdom” and opinions and predictions and hoping for one outcome or the other. And ultimately, there would be a loser. Either the Axanar feature film would get made and the studio would have to eat humble pie or else Axanar would get the ax, Alec Peters would be humiliated and forced to go bankrupt while the studios did their victory lap. Either way, a large number of fans would feel frustrated, angry, and hurt because of the outcome.

By initiating this lawsuit, Paramount and CBS were creating what many fans were seeing as some kind of warped sporting event where they would pick a side, root for every small victory, jeer at the other team, and do a lot of trash talking…sometimes in the most vile and disgusting language imaginable (I’m talking to you, GandT Show!).

And JJ Abrams and Justin Lin realized that.

As fans themselves, Abrams and Lin understood that this situation was, in fact, a Kobayshi Maru scenario for Star Trek itself…and especially for the studio. Even if CBS and Paramount won, what exactly would they win? They’d protect their intellectual property, but from whom? From the fans who loved it and supported them? Even if the studios had won, they’d still have lost by turning a wonderful outlet for fan FUN into fan FEAR and FRUSTRATION.

Whereas the studio attorneys saw Axanar as a great white whale to be hunted and slaughtered, Abrams and Lin looked beyond (oh, sorry, unavoidable pun!) that to the potential fallout. Together, they both put pressure on the studio to settle this case amicably so that their movie could premiere without every other news story between now and July (or January!) mentioning that Paramount and CBS were suing Star Trek fans. The details of the case wouldn’t be as important to the media as the “David and Goliath” story, and reporters seldom show sympathy for Goliath. That certainly wouldn’t help ticket sales, and it would likely discourage new fans from wanting to participate in Star Trek because, well, who wants to start throwing their support into a franchise whose owners are willing to sue their own fans?

As I read some the posts by angry and frustrated Axanar opponents who had hoped to see the utter decimation of Alec Peters and his production, I noticed many of them suddenly turning on JJ Abrams and hoping there might still be some major wrist-slapping and humiliation coming from the settlement discussions.  And I realized that these folks haven’t realized a very important thing…

JJ Abrams and Justin Lin have given fans a precious gift: permission to stop being lawyers and start being FANS again.

Whether you were on the side of the studios or the side of Axanar, it’s no longer anything you need to worry about. Seriously. Show’s over, folks, nothing to see here anymore. Unlike the U.S. presidential election, the public doesn’t get a vote in this. Lawyers for the two sides will be moving toward a settlement, and CBS will (finally!) be issuing guidelines for fan films to follow in order not to get into this kind of struggle again.

So I say, REJOICE!!! This is a GOOD thing! Star Trek fan films will no longer have to hide in the shadows, constantly fearing the subpoena as if a Sword of Damocles were hanging over their heads. We can go back to just having FUN.  Can’t we?

And let’s face it, fan films are COOL! Sure, they’re not all Oscar-caliber (some are more Oscar the Grouch caliber), but they all come together to celebrate Star Trek in new and creative ways we never could before. But now we can! Thanks to JJ Abrams and Justin Lin pulling the studio legal team out of their Captain Ahab stupor, we can go back to being just fans again…and not lawyers.

As far as I’m concerned, that’s a wonderful gift. I just hope that the rest of fandom will decide to ACCEPT that gift, to abandon the anger and vitriol, and just go back to the paradise of Trekkiness that awaits us.

This year promises to be the best year ever for Trekkies: the 50th anniversary, a long-awaited set of official guidelines for fan films, a new movie which actually looks like it won’t suck, and a brand new TV series that’ll only cost you six bucks a month to watch. Okay, maybe it’s not perfect, but it’s so much more, so much better than we fans have had for a long time.

Let’s please all go back to being just fans again…because Star Trek is so much more fun without lawyers everywhere.

12 thoughts on “We should be FANS, not lawyers”