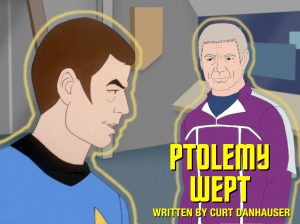 The episode is a sequel of sorts to two third season TOS episodes: “Spock’s Brain” and “Requiem for Methuselah.”  And thankfully, we don’t see the Morg or Eymorg.  But we do see Flint, who plays a major role in the episode, which is made much more interesting from his presence.  I won’t spoil any more from the story, as it’s definitely worth checking out.  It starts a little slowly before becoming an episode that feels, in story at least, very similar to something that might very well have happened in an episode of TOS or TNG.

You do have to get past the voices, though.  Curt provided nearly all of the character dialog himself, and while he tries very hard to imitate Kirk, Spock, McCoy, Scotty, Suly, and even M’Ress and Arex, if you’re looking for an exact match to the original actors, you’ll be disappointed.  For me, for most fan films I view, I always adjust the setting on my expectation-o-meter to allow for “trying really hard”…which Curt certainly did.

And even though it took five years from 2011 to 2016 for Curt to release the final part, in the end, it was worth the wait, and the hour-long animated episode is something to be very proud of.