It was an incredible night!  I’ve been to my fair share of special STAR TREK events in my life, but this one had to be one of the best I’ve ever experienced.  There was just something magical about being in the same sound stage that TOS filmed in 50 years ago while also celebrating that rich five-decade history with people who all loved this franchise so dearly.

I managed to arrive shortly after 5:30 for a 7:00pm event (thank you, WAZE!!!), and the line was already pretty long.  It turns out that Paramount had completely overbooked the event (don’t they realize how popular STAR TREK still is???), and a bunch of people who arrived closer to 7:00 or later didn’t get in at all.  I feel so bad for them making the schlep, getting their hopes up, and not being allowed in.

Once inside, I was supposed to be given a badge and wristband.  Instead, the guard stopped me and told me to go put my Canon G3X camera back into my car.  Only the press got to bring cameras… and minor bloggers like me don’t count.  Bah, humbug!  But I still had my iPhone 6s, which is how the rest of these photos were taken.

Previously, I blogged about how got into this event thanks to a contest sponsored by Larry Nemecek of Trekland.  I was allowed to bring one guest with me, and that was Derek Allen, who came all the way up from Long Beach by bus!  (Those not from L.A. won’t appreciate the significance of that, but trust me, that takes dedication!) 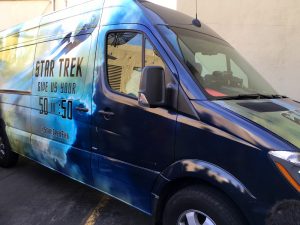 Just outside of Sound Stage 31, a colorfully-painted van was parked with the words “STAR TREK: GIVE US YOUR 50 in :50” on it.  Turns out it was filled with recording equipment where fans could sit in the van and record their best memory of STAR TREK in 50 seconds or less.  My story involved my five-year-old, Jayden.  We were watching “The Enemy Within” for the first time, and Kirk’s evil duplicate had just appeared on the transporter.  When I asked Jayden what he thought would happen next, he said, “I don’t know, Daddy, but if they don’t turn off the transporter, there’s going to be a hundred Captain Kirks, and it’s going to break the ship!” 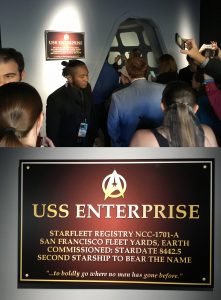 At about 6:45, they opened the door to the Stage 31 and began letting people in.  The first thing we saw was a plaque from the USS Enterprise NCC-1701-A and a strange and science fictionish-looking corridor beyond it with lights fading on and off.  Where the heck were we going??? 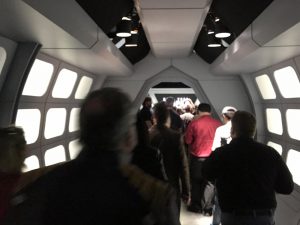 This was the corridor, which was challenging to photograph because the lighting kept changing.  But I managed to get at least one decent picture. 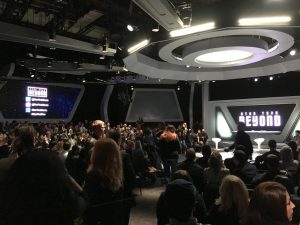 And then we were inside!  Trapezoid movie screens were every- where as the audience sat in concentric rows under a custom-build ceiling.  It’s amazing what a movie studio that employs hundreds of set builders can construct when it wants to! 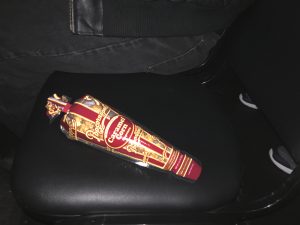 Each seat even had a small bag of Popcornopilis caramel popcorn on it for us to much on.  Obviously, no expense was spared!

People kept coming in, and eventually, there wasn’t a seat left.  Looking around, I saw a few faces I recognized.  Larry Nemecek was there, of course.  And Alec Peters of Axanar.  I saw a person from Trek.FM podcast radio.  Oh, and the legendary Bjo Trimble and her husband John were there, too.  They are so sweet!

And then it came time for the show.  Things got started as Adam Savage from Mythbusters came out to host the event.  I’ve noticed online that there’s a bunch of higher quality videos posted of the presentation (my is lower quality because I was shooting on a iPhone from the back of the room).  But everything else I’ve seen is edited, and mine is not.  I’ve got just about everything in there (except when I had to lower my arms to keep them from cramping up!).

So here’s the footage that I shot, with not-so-great image quality.  But at least you can hear everything, including what happens at 21:54… 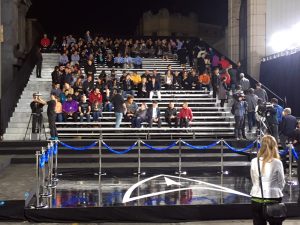 The above video ends with a segment that took place immediately after the presentation… just outside of Stages 31 and 32 where the original STAR TREK had been filmed.  A parade of fans was told to climb up and fill the stands behind a large black and white Starfleet arrowhead emblem.

Once the stands were filled (with many still standing on the street level because–like I said–they seriously underestimated how many Trekkers and Trekkies would show up!) a special dedication ceremony began.  (That’s me on the right side of the photo in the yellow box.)  The Paramount Studios lot is laid out with many “streets” that go past buildings and sound stages.  On this night, the street in front of Stage 32 was renamed LEONARD NIMOY WAY after the late, oh-so-great actor who gave us the beloved character of Spock.

Leonard’s family was there, including wife Susan, son Adam, and daughter Juile. And of course, the stars of the new Star Trek Beyond were there, too, as were JJ Abrams (producer) and Justin Lin (director).  Below is a close-up of the above photo showing Leonard’s family right behind Karl Urban’s head (Julie to the left of Karl, and Adam and Susan to the right).  Oh, and that’s a close-up of me on the far right because, hey, it’s my blog, people! 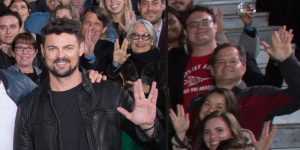 And here is one last look at the new street name: 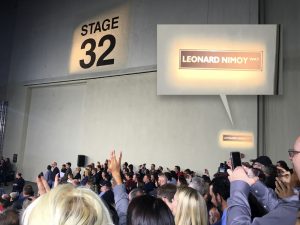 After the ceremony, the door to Stage 32 was slid open, and we were all told to make our way inside for the showing of the new trailer.  But first, we had to surrender our cell phones to make sure no one secretly recorded what we were about to see.

Of course, confiscating hundreds of cell phones and then giving them back a few minutes later would have been a logistical nightmare.  But Paramount had another method in mind, and it involved green Orion women.

On our way inside, we were each asked to place our cell phones into little pouches, which were being happily handed out by these emerald goddesses.  Once a cell phone was inside a pouch, the Orion would clip-lock it.  We would each hang onto our own cell phone–we just couldn’t use it.  Once the trailer was over, we could go up to an Orion afterwards and get the pouch unlocked.  Pretty neat and efficient idea!

What happened next is described in this other blog I wrote a couple of days ago.  We got to see not only the new Star Trek Beyond trailer but ALSO the first 15 minutes of the film!

So with a cheering crowd now utterly psyched about this new movie, we were told it was time to PARTY!  And with that, a black curtain that had been hanging down as a “back wall” suddenly rose up to the ceiling to reveal a large room with colored lights, techno music, awesome gourmet edibles brought around on food trays, wine and champagne (and water and soda for those of us driving home), and props and costumes from the new movie.

And with that, I’ll let the remaining photo captions finish this blog posting.  Enjoy…

Live long and prosper, my friends!