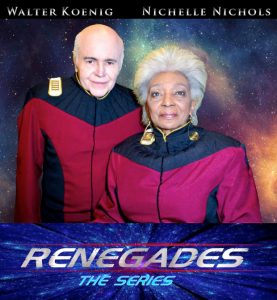 As promised, RENEGADES: The Series has released a special video of the final curtain call Walter Koenig would have playing the character of “Pavel Chekov” (or at least an admiral with a heavy Russian accent who has had a iconic career in space).  It’s a magical moment as filming wraps, and the cast and crew both applaud the living legend.

The video was released because Renegades managed to raise more than $120,000 for post production on their 2-part episode “The Requiem.”  They set out to raise $60,000 for the first part and got there in less than a week.  Passing that goal, they now need to reach $150,000 for part 2.  So they’re almost there!

If they raise another $30,000 by midnight Pacific Time tonight, they won’t have to do another campaign anytime soon (until they make MORE episodes!).  Maybe a tall order, but you do still have about eleven more hours (as I post this) to make your donation.  Just CLICK HERE!

And in the meantime, please enjoy WALTER KOENIG’S final curtain call as Chekov…