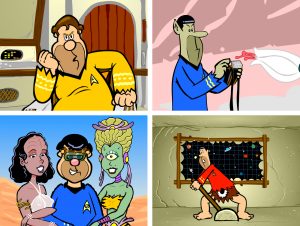 The USS Magnetize BCC-1701, a Conchstitution-class stoneship, is the pride of Stonefleet.  Powered my magma/anti-magma engines, it is commanded by Captain James T. Kirkstone along with Vulcano first officer Mr. Sprock and chief medical officer Dr. RcKoy.  Their adversaries, the Klingosauruses, look a lot like Dino the dinosaur.  The equipment they use has all the whimsical charm of the prehistoric tools and contraptions viewers would see in the modern stone age of Bedrock.

The music is a combination of familiar Star Trek scores played in the simplistic style of the cartoons of the 1960s and 70s.  The voices have the nuances of the original series Trek crew, while the sound effects are straight out of the Hanna-Barbera collection.  There’s even a laugh track!

Stone Trek is a true mash-up of all things Flintstones merged with all things Star Trek with stories that are fun, gags that are hilarious, and all sorts of Easter eggs scattered throughout.  Watch the episodes with an eagle eye, and you’ll spot E.T., Ren & Stimpy, R2D2, and a host of other unexpected cameos.  The only negative thing I have to say about this fan film series is that it ended too soon… I want to see more! 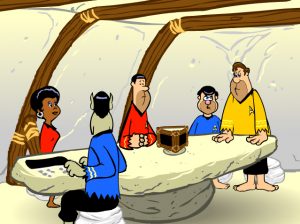 Late last year, I had the pleasure of chatting with both Brian Matthews, the creator of Stone Trek, and Wally Fields, who masterfully provided nearly all the voices that make these hysterical and lovable characters come to life.

JONATHAN: Brian, what’s your background in terms of skills and career?

BRIAN: I have always been able to draw, ever since before I could remember.  According to my parents, I’d color on the walls, so they made sure to provide me with paper all the time!  But that was mostly a side thing because when I entered middle and high school, I got into music and marching band.  And that’s when I learned to compose music, and I arranged some pieces for the band.  From 1983-87, I went into Ringling College of Art and Design in Sarasota, Florida.  A number of years later, I was working for a small multimedia company, and that’s where the idea for Stone Trek sort of gelled.  Because I was using software like Flash, some of these ideas that had probably been floating around in the back of my head were starting to see some way of coming out.

JONATHAN: But what was it that led you to mash-up Star Trek and The Flintstones specifically?  Those two franchises couldn’t have been more different!

BRIAN: For as long as I can remember, Star Trek and The Flintstones have been two of my favorite shows.  Every now and then, I would do fun sketches that mashed-up the two shows, and those ideas just kind of swam around my brain for years until 1999 when I finally decided to take them a step further.  I was using a lot of multimedia software, as I said, I did a lot with Photoshop and Flash, and so I launched a website that featured little cartoon mash-up drawings of all 79 episodes of the original Trek parodied with a cartoon scene from each. 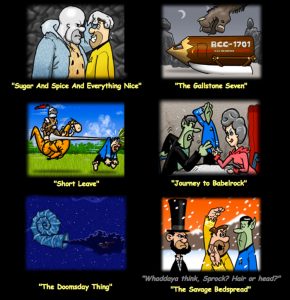 JONATHAN: So how did those still images turn into a full-blown animated cartoon series?

BRIAN: Well, I knew that I wanted the next step for Stone Trek to be a full animation, but I also knew that I wasn’t going to be able to do this all by myself.  Almost immediately, I ran across Wally Fields out in California, and he’d done a lot of voice-over work.  He liked the idea a lot, and he offered to do the first episode – or episodes because they were usually 2-parters – for free!

JONATHAN: Yay, finally a chance to talk to the other guy!  What’s your background and career, Wally?

WALLY: Like with so many performers, it started with pretend.  Wanting genuinely to BE in the Star Trek universe, I just thought imitating Kirk, etc. would help me do that.  Seeing John Belushi as Kirk, though, didn’t hurt matters.  I loved comedians like George Carlin, Richard Pryor, Robert Klein, and imitators like Rich Little.  The first famous impression I remember doing was Howard Cosell.  But I got sick of him ‘cause everyone else was doing him.  By the time I started imitating Kirk and crew on stage in Idaho in the 80s, people weren’t sick of hearing him yet.  Now I guess he’s another Cosell.  But how many people do you know can be Spock?

Nowadays, voice acting, sound production, and stand-up comedy are my Superman job. I’ve done a bunch of professional work, including voices for the Birth of the Federation video game.  Meanwhile, my Clark Kent job is as a Shipment Paperwork Coordinator at the New United Motor Plant in Fremont, California.  It’s okay work, but not nearly as fun, and every year, I get closer to being able to do my Superman job full-time!

JONATHAN: Wally, despite voicing a wide variety of characters on Stone Trek, you keep each one distinct and consistent.  How do you manage such a feat?

WALLY: It’s essentially a straightforward process.  Listen to the voice you want to imitate, imitate and record, listen to the recording.  If it doesn’t sound like the original, you’re doing something wrong.  Try to figure it out, and re-do.  Eventually, you learn to unconsciously correct for the difference between how your voice sounds in your head, and how it sounds outside.  Trial and error… and practice!

JONATHAN: And how did Brian convince you to work for free?

WALLY: Well, I only did the first one for free, then I charged him!  I remember I was gonna reject the offer to do the spoof, as I was busy with the Sev Trek fan film spoof at the time (“Pus in Boots,” where I voiced Picard and so on).  Then I saw Brian’s trailer!  Something about the way he made Flash animation look so much like the limited animation of Hanna-Barbara really tickled me!  And, of course, the anachronism of the stone age Enterprise.  Even little touches… if you look at the opening, you’ll notice “Jetsons clouds” in space behind the ship. 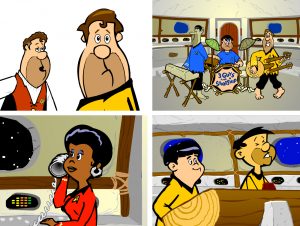 JONATHAN: Brian, I noticed that you wrote the first 2-part episode, “The Deadly Ears,” but then the rest of the Stone Trek episodes were written by someone else.  How did that develop?

BRIAN: There’s a friend of mine, Jim Jenkins, also a Star Trek fan, whom I’ve know for years and years, and we worked on a comic book project back in the 1980s.  We cranked out a couple of issues of a comic called Blackstar (nothing to do with the cartoon TV series) for a publisher called Imperial Comics.  A decade later, I wanted Jim to write Stone Trek, but he didn’t like the idea when I first presented it to him.  I’m not a great writer, so I didn’t give up on Jim.  Instead, I worked with Wally to do the first 2-parter, and then Jim agreed to come on board.

JONATHAN: And Jim’s first episode was hysterical.  It was actually a mash-up of a mash-up, as you guys added in 2001: A Space Odyssey to Stone Trek!

JONATHAN: And might I say, Wally, that you managed to do one of the most perfect Hal 9000 impressions that I’ve ever heard!  If my blog readers watch nothing else, watch the 2-part episode “20001 BC: A Space Oddity“. 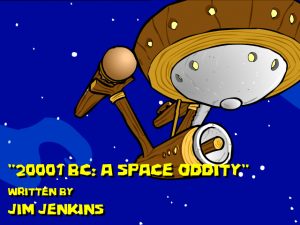 BRIAN: Starting with that episode, we had a sponsor: Starland.com.  I went out and contacted them so that I could afford to pay Wally for his amazing work.  They sponsored all the rest of our episodes.

JONATHAN: So now that you had the team in place, what was the process for making an episode?

Next time, in the conclusion of our 2-part interview, we’ll find out what it took to produce a full episode of Stone Trek, why Brian started killing off his fans, and whether or not there will ever be more Stone Trek for those of us who can never get enough of this ancient space-age parody.

Anyone wanting to check out Stone Trek, eight of the animated episodes are at the top of the list on this page and the final episode (part 2 of “Marooned on Tatooine”) can be found here.