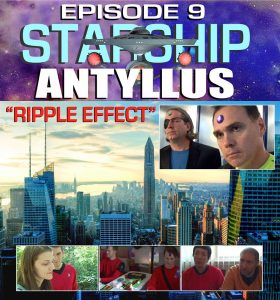 George Kayaian released his first Star Trek fan film waaaaaaay back in 1994.  It starred his mother as the captain and his father as the chief engineer.  That series turned into a trilogy of mutli-part productions, finishing up in 2012 and spanning more than five and a half hours of screen time!

But George Kayaian wasn’t finished quite yet.  In 2013, George began his next ongoing fan series, Star Trek: Antyllus, starring himself as the captain.  George also writes and directs the episodes, still using family and friends to play the various roles and help with production.  As fan series go, it’s quite noticeably one of the lower budget ones, but those are often the ones with the most heart and passion….and good stories.

George posted his previous episode in November of 2015, a couple of months before FAN FILM FACTOR was launched.  In the interim, the new fan film guidelines were released by CBS and Paramount, which necessitated a change of title for the series to Starship Antyllus (fan films are no longer allowed to have “Star Trek” in their titles).  Of course, there are other guidelines, as well, dealing with things like funding and episode length.  Funding isn’t an issue, as these guys pretty much bankroll themselves.  But run time for this episode is 35 minutes, way over the 15-minute limit imposed by the studios.  I asked George about that, and here’s what he said:

I’m trying my best to follow the guidelines, and I’m hoping that the grandfather clause still applies since this episode and the next couple were created before the guidelines came into being. It’s just taking me a while to get things posted in this incredibly busy period of time in my life. My series is self-funded, or no budget at all for that matter! And each episode is made with my family and friends with love and no pay. We are a true fan film project. I hope the powers that be appreciate that and realize where I’m coming from. Even my YouTube channel is NOT monetized! Everything I do is for love and creativity.

And you can watch their first eight episodes here on their YouTube channel.