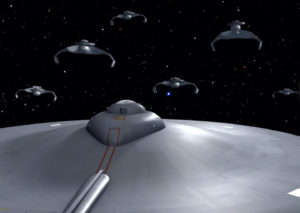 Regardless of who wrote them, how, and why, these guidelines are now a product of CBS and Paramount (mostly CBS) and therefore reflect back upon the corporation and the employees thereof.  And neither likes to ever admit to making a mistake.

Had Project: SMALL ACCESS worked and convinced  CBS to revise some of the guidelines, it would have been like them saying, “Well, we were wrong.”  How often have you EVER heard a major movie studio say that?  (I never saw an apology for Highlander 2 or a “mea culpa” for Monster Trucks!)

And worse, changing the guidelines just because a thousand angry Trekkies told them to and threatened not to subscribe to their new streaming service?  That’s like paying the ransom to the kidnappers.  What would be the next thing these rabid fans were willing to hold hostage to force the studio to do meet their demands?  It’s a slippery slope.

So in hindsight, I’m not surprised that we didn’t get what we wanted. But one thing I do know is that the journey of a thousand miles begins with a single step.  And so if we want to have any success at all in getting some friendly cooperation from the studios, maybe we have to look at taking that one small step first…one small step for fan, one giant leap for fan films!

Okay, let’s assume we have a shot to change ONE and ONLY ONE guideline.  Let’s assume the studio(s) might–MIGHT!!–consider just that small request.  Given that choice, which of the 10 (actually 15…since guideline #6 is divided into six separate items) would we choose to make our ONE plea to the studios?

(And if you’re saying, “NO!  I refuse to choose just one!  They’re all bad!!!”  Then you’re missing the harsh reality that we’re not exactly in charge here.  If you want to try to convince CBS to change or eliminate a whole bunch of guidelines all at once, good luck to you.  I’ve been down that path, my friend, and this time I’ve decided to take another road.  And I humbly invite you to join me…and us.)

This choice actually isn’t as difficult as you might think.  After all, we can cross half of the guidelines off the “need to change” list almost immediately because they really aren’t bad at all.  (And to save me making this blog entry super-long by copy-pasting the text of each guideline, here’s a LINK TO ALL THE GUIDELINES you can click on for reference.)

“Nothing to Get Hung About” Guidelines

This first group is the “low-hanging fruit” of guidelines that aren’t really all that hard to follow and shouldn’t trouble anyone other than the most indignant fist-shaker.  And as I said, we don’t have the luxury to both shake our fists AND make any real progress.  A little humility goes a long way…

#2 – The title can’t have the words “Star Trek” in it and can’t call itself “official.”  If this bothers you, you’re really, really gonna have a hard time with this whole selection process.

#3a – No using clips or recreating existing scenes from Star Trek.  Most fan films don’t have that problem and haven’t used existing clips.  And if you really, really feel the need to recreate Kirk’s “E Plebnista” speech, just do it as a selfie video and leave it out of your fan film.

#6.2 – The fan film can only be shown for free via a streaming service with no revenue collected.  Fine, that was the main “rule” before the guidelines anyway.

#6.4 – No ads or ad revenue.  Personally, I find those Youtube pop-over ads annoying anyway.  We should all be cheering this one!  No revenue neans no revenue.

#8 – The fan film must carry the four line disclaimer, “[Insert legalese here.]”  A disclaimer at the end of the credits?  So what?  Big deal.

#9 – No registering your work or any part of it as a separate copyright or trademark.  Honestly, I don’t know of any fan film that ever did this or even planned to (no, not even Axanar).  By the way, if you create a fan film, you still hold the copyright to it no matter what.  (Not the trademark, though; that’s different.)  However, a registered copyright carries along with it certain legal options involved in suing that CBS and Paramount don’t want fan filmmakers to possess.  What this means is that you can still claim the copyright to your specific work and ask YouTube to pull down any other version of your fan film that uses a substantial amount of it (and YouTube will comply).  But you can’t sue the person who posted it for infringement.  And since we’ve all seen how messy and expensive copyright lawsuits can get, I don’t think any fan filmmaker is missing out by following this particular guideline.  And remember, with Plan “B” we only get a crack at asking CBS to change ONE guideline…and this is not the droid you’re looking for.

#10 – You can’t say or imply that CBS or Paramount endorsed you.  Get over it.

BOOM!  Seven of the fifteen guidelines are now completely off of the list.  Wasn’t that easy?  Will the other eight be as easy to ignore?  Probably not.  But let’s begin with the next group, which I lovingly call the…

“What They Don’t Know…” Guidelines

Remember that CBS and Paramount just spent close to a million bucks on a lawsuit that lasted a year, got them terrible publicity, fractured their fan base, and wound up with a settlement that left the offending fan production and person behind it mostly intact.  In other words, the studios probably aren’t really motivated to jump back into the courtroom again unless the absolutely have to.

If anything, their future responses to fan films that push the envelope will more likely be a polite phone call or e-mail request, maybe a warning (depending on what you do), and at worst, a “Well, don’t do it again.”  I doubt we’ll see another lawsuit unless another Axanar-level production comes around and blatantly violates most or all of the guidelines with a belligerent attitude.

Also—and I know that many fans will not believe this—but CBS and Paramount are most likely not policing every new Star Trek fan film that comes out, analyzing each one looking for props or costumes that look like a bootleg or scanning through the credits for anyone who ever worked on Star Trek in any way.  Ain’t nobody got time for dat!

They’re looking for the most obvious guideline violations: run time way too long, Garrett Wang is playing Harry Kim, you raised $250,000 on Indiegogo, you gave away tons of perks, etc.  And even then, it’s still not a guarantee of a lawsuit.  Maybe just a cease and desist letter…or being given a second chance to edit it down or cut out the Harry Kim scenes.  Who knows?

But the point is that there are a number of guidelines that kinda work on the “honor system.”  So since we’re trying to pare down the list of offensive guidelines to choose just one to focus on for now, are there others that fans can work around for the time being?  (And no, this is not a “How To Sneak Past the Guidelines” instruction manual.  I’m simply pointing out possibilities.)

#3b – You must get written permission to use any non-Trek third party copyrighted materials.  (Remember that we had a “#3a” in the last list?  Well, #3b is the second half of that guideline.)  This is actually a “cover-your-butt” item for CBS and Paramount.  They’ll never sue you for stealing someone else’s intellectual property (by law, they actually can’t), but if that other copyright holder ever sues you—let’s say, for example, you use without permission a Beastie Boys song while your main character rides a motorcycle around an alien planet—the studio doesn’t want Def Jam Columbia also coming after CBS for encouraging fan producers to rip off other copyright owners.  “Oh, not us!” says CBS.  “Read guideline #3; we expressly discourage such actions!”  It covers CBS and Paramount but doesn’t really affect fan films much unless you’re using something else that’s copyrighted…which fan films have done for decades by using the original Star Trek theme music.  None has gotten sued for it yet, so this might be another case of non-willful infringement.  Anyway, CBS won’t ever change this guideline, as it protects them.  So take it off our list.

Next time, we’ll finish the list of “What they don’t know…” guidelines and then hit the last category: “There’s No Way Around ‘Em” Guidelines.