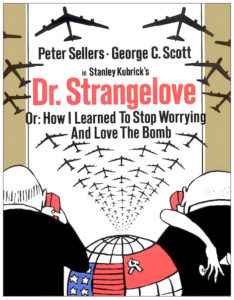 At the end of Part 2, I said that, in order to move forward with our goal of getting CBS and Paramount to revisit and revise the fan film guidelines, some of us more–shall we say–passionate fans are going to have to face a very unpleasant, inconvenient truth.  And here it is:

I’m sorry, they just do.  And yes, I’ve heard all the arguments that it was the FANS who saved Star Trek and supported it all these years.  It was the FANS who spent billions of dollars keeping the franchise commercially viable, watching it on TV and in movie theaters, and buying an endless parade of licensed merchandise.  We fans MADE Star Trek what it is today!

You know who else made Star Trek what it is today?

For forty years, Desilu and then Paramount and Viacom poured literally billions (yes, with a “b”) of dollars into creating Star Trek for us all to watch.  And I don’t care how many DVD sets and action figures you own or how many Pez dispensers and TOS bathrobes and 25th anniversary collector plates you’ve bought over the years.  I don’t care if you’ve attended every Creation Convention ever.  The is no way that you’ve spent a billion dollars on Star Trek!  (Well, maybe if you bought the premium Admiral’s package at every Creation con, then you’re probably close to a billion dollars.  But otherwise, no.)

And even though CBS has only owned Star Trek outright for just under a decade, they have continued to invest money into the property through licensing management and now through the development of the first new Star Trek television series to be produced in the past dozen years.  (Has it really been that long since the finale of Enterprise??  Sheesh!!!)

But the point is that if it weren’t for the studios actually MAKING Star Trek for five decades, we fans wouldn’t HAVE Star Trek.  It doesn’t matter whether or not you think the J.J. Abrams movies sucked or whether you think Star Trek: Enterprise should have gone seven seasons with Shran joining the crew in season 5 (yes, that was apparently the plan).  And it doesn’t matter whether you’re looking forward to Star Trek: Discovery or dreading it.  The fact remains that, in fifty years, the owners of Star Trek never turned their back on the property or let it languish (too long) or sold it or walked away.  (You can’t say the same about Star Wars, y’know!)

The studios have earned the right call the shots…whether we fans like it or not.  And despite what Star Trek Beyond director Justin Lin tweeted, Star Trek does NOT belong to “all of us.”  It belongs to CBS.  And I am truly sorry if that statement upsets some of you.  To be honest, it kind of upsets me, too!  But that doesn’t make it any less true…and this blog is all about reality.

CBS and Paramount decided to issue fan film guidelines.  The guidelines were more restrictive than most fans expected (or wanted).  But they exist, and they are not going away.  That is reality.  Arguing “should” or “needs to” doesn’t really get us anywhere.  And I really want us to get somewhere.

And to get somewhere, we need to start with something that I only realized recently, but it’s quite important in learning to accept the guidelines as a reality.

Most fans who hate the guidelines (and that included me for a very long time–not that I love them now, mind you!) see the range of possibilities as follows: “NO RULES!” on one side and these Draconian “GUIDELINES” on the other side.  Good versus evil.  Happy versus sad.  Or as my dad often says, “Chicken salad versus chicken crap.”

Here’s the way many irate fans see the guidelines…

But that’s a fantasy.  Yes, fan filmmakers operated in a utopia of “No rules!” for fan films (except for the commonly accepted “Don’t charge to see it/No profit” rule) for decades.  But at the other end of spectrum is NOT the “evil” guidelines but rather the much worse “No fan films!  EVER!”

CBS and Paramount could, relatively easily, enforce that absolute moratorium on fan films if they wanted to.  Few fan producers have the resources to fight in court, so for the cost of some cease and desist letters and a few simple court filings, CBS could quickly scare off all but the tiniest number of super-ballsy fan producers.  Sure, the public relations backlash would be horrific for the studio to deal with (which is why you will likely never see such a thing), but it’s there as an option at the other end of the spectrum from the “NO RULES!” side.

So in reality, the spectrum of “really good” to “really bad” looks more like this…

And that, therefore, actually puts the guidelines in a middle “compromise” area.  And when you look at it from that perspective (as I’ve begun to), the guidelines don’t seem like such a travesty anymore.  And believe me, the Jonathan Lane from last July would NEVER have believed he’d be typing that sentence barely eight months later!

But it’s true.  As John Van Citters mentioned in his podcast interview, the guidelines provide a new, official “safe harbor” that no studio has ever offered to its fan base before.  For the most part, the uncertainty is now gone for those who want to follow the guidelines.  Suddenly there is an option for Star Trek fan filmmakers that allows for total peace of mind.

And remember, prior to last summer, if a group of fans wanted to create a Star Trek fan film, there was always the possibility of a lawsuit waiting at the finish line (or even before the finish line, as it turned out in the case of Axanar).   Now there is a way to make your fan film and not have to worry about any repercussions from the copyright holders.  True, it’s a very restricted creative area in which to produce your project, but it’s far from impossible…and some very decent fan films have been released in the past eight months following these guidelines (see my list from at the bottom of Part 2 of this blog series).

And believe it or not, it’s not like you CAN’T violate any of the guidelines.  You won’t trigger some automatic lawsuit if your fan film goes to 21 minutes or you pay some guy to write you original music.  You just do so at your own risk….just like it was BEFORE the guidelines were released.  Yep, back in 2015 or 2009 or 2004, any fan film could have been the first Axanar.  Any production could have drawn the short straw at any time and been the unlucky first fan film that Paramount or CBS decided to make a harsh public example of.  It could have been Star Trek: Hidden Frontier or Star Trek: New Voyages or Starship Exeter or Starship Farragut or Star Trek: Of Gods and Men or Star Trek Continues or Star Trek: Renegades.  It was a game of Russian roulette for the longest time because there was no guarantee for any fan film.  Now there is.

And if you want to spin the Russian roulette wheel again, no one will stop you.  Star Trek Continues plans to do just that when they release their final four episodes, each in violation of multiple guidelines.  But the studios’ decision whether or not to take legal action is on a case-by-case basis, and STC is going to take the chance when they release episode 8 next month that maybe, hopefuly they won’t get sued.  And perhaps another fan film can do the same at some point.  Perhaps not.  Perhaps the studio will take legal action.  Perhaps they won’t.

The point is that, if a fan production chooses to ignore one or more of the guidelines, they are merely transporting themselves back to 2015 or earlier in terms of uncertainty.  Or they can follow the guidelines and be “safe.”  The choice of how to produce their project has not been taken away from any fan filmmaker.  There has always been the option to take a chance.  Only now there is a new option: play it completely safe by following all the guidelines, and you won’t have to worry at all.

And if a fan production does that, there’s also certain other advantages beyond just not losing sleep over getting a cease and desist letter or, worse, a subpoena!  As John Van Citters said, your fan film can now be shown at licensed Star Trek conventions, and you can even have a con table where you can show your film and collect donations.  Fan filmmakers never had that opportunity before…and it’s pretty major.

Now look, I know it sounds like I’m just being an apologist for the guidelines and that someone at CBS has probably kidnapped your favorite blogger and replaced him with a pod person or pre-programmed postironic android.

“What have you done with the real Jonathan Lane???”

But that’s not the case, folks.  This is reality.  We’ve now had eight months to look at the effect of the guidelines on fan films, and as I said in Part 2, mass prognostications of the death of Star Trek fan films from the guidelines have proved (so far) to be unfounded.

So now we’re left with a bunch of guidelines that are somewhere in the “compromise” zone.  And that part is fine.  I just personally think they have been placed a little too close to the “Draconian” side.  And while “overly permissive” might be on many fans’ wish lists–where fan films can run 2 hours long and raise up to a million dollars in crowd-funding–that isn’t realistic either.  And just as the “too restrictive” side doesn’t feel fair to the fans, the “too permissive” side isn’t really fair to the studios.  (Yes, I just typed that.  And I am NOT a pod person!)

If CBS and Paramount don’t feel comfortable with fan films having a “space race” (as John Van Citters called it) where they’re constantly trying to one-up each other with bigger budgets and more celebrity actors and other professionals, then that’s their right as the copyright holder.  You and I might believe the studios are missing out on some amazing marketing and licensing opportunities, but as I said, we can’t dwell on “should” and “needs to.”  It’s their sandbox, and we need to respect their ownership.  That, my friends, is reality…since Star Trek isn’t for sale, and we couldn’t afford the $4 billion price tag to buy it anyway!

So that brings us back to the same question I asked last time:

Then why bother keeping up the fight at all?  If I’ve learned to stop worrying and love the bomb, er, guidelines, then it’s time to move on to other things, right?

Well, no.  I still think there’s room to make these guidelines work a little better for both sides.  As I said last time, change can be for the better.  That’s what I’m hoping for the guidelines: to nudge them ever so slightly (but significantly) away from “too restrictive.”

Now that I’m over my initial shock and indignation from last June, maybe we all can concentrate on figuring out which guidelines are the ones to really focus our attention and resistance efforts on.  And perhaps, if the studios don’t think we’re just an irrational mob out to get rid of the guidelines entirely, and if we can point to just one or two guidelines that we really, REALLY think have pushed the restrictions too far…

…then maybe we might have a hope of succeeding where we didn’t before.

So what one or two guidelines do YOU think are the most problematic?  Feel free to comment.  And I’ll share MY choice(s) next time…