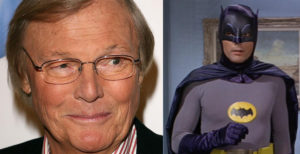 I awoke this morning to the news on my alarm clock radio: “The actor who played Batman in the 1960s has died.  Adam West passed away last night after a short battle with leukemia.  He was 88.”

Adam West was always “my” Batman, just as William Shatner was always “my” Starfleet captain.  The two shows, Batman and Star Trek, were kind of joined at the hip.  They both premiered in 1966 and ran for three seasons (on different networks–Batman was on ABC).  Both series were created just as color television was becoming widely available…and both series made ample use of a vivid palette and bright hues because of this fact.  The shows shared many notable guest stars, including Yvonne Craig, Julie Newmar, Lee Merriwether, Frank Gorshin, Grace Lee Whitney, and Joan Collins.  (Betcha didn’t know about those last two!  Take a look–there were actually 13 famous actor crossovers between the two concurrent series.)

And of course, the two shows each featured a leading man with a unique (some might say “over the top”) style of acting.  William Shatner was known…for…his…dramatic…

But Glen Weldon, author of the book The Caped Crusade: Batman and the Rise of Nerd Culture, made this comment about Adam West’s delivery of this lines:

“He inserts pauses that are not merely pregnant but two weeks overdue. Those pauses were of course a deliberate choice — he wanted the viewer to see Batman’s intellectual processes, the way he thought through a puzzle and excitedly seized upon the answer.”

It was campy and dazzling all at the same time.  But it just felt right…from both actors.  I can’t imagine anyone else doing as much, er, justice to those two roles.  Despite the Vietnam War, civil rights, assassinations, riots, and social upheaval, the 1960s were still a simpler time—at least on network television (and at the time, there was nothing other than network television if you watched TV).  And these two men helped define it.

As a child of the 70’s, I watched both shows repeatedly.  And these two characters, played so ironically by these two actors, helped to shape me as a person.  I saw role models who were brave and strong, willing to stand up to the bad guys and fight for what was right—whether it was with a phaser, a batarang, or just their wits…always with their wits.  They were human, of course, but also something more.  They had a moral compass that was unshakable.  They knew what was right, and there was no gray area.

As I said, a simpler time.  Two decades later, their franchises would evolve with other captains and darker knights.  But Adam West always saw himself as a Bright Knight, a version of Batman untainted by the dark turn the character took in later years.

While I loved the Michael Keaton and Christian Bale interpretations of the characters (the jury’s still out on Affleck…and the less said about Kilmer and Clooney, the better), there will always be a special place in my heart for Adam West.  His voice will always be unmistakable.  And really, what other actor would have done stuff like this—week after week after week—for three years?

C’mon–admit it!  It was brilliant comedy.

I was so heartened to see Adam West’s career continue in later years on shows like Family Guy, despite some unavoidable typecasting.  But he embraced it all, and his fans, in a way that William Shatner only did after a decade of resisting and trying to deny the inevitable truth that he would always be Captain Kirk.

But Adam West was and always will be Batman…a special kind of Batman that carved out his own special batcave in our hearts and minds.  As he goes off to answer that great bat signal in the sky, I can only say this: