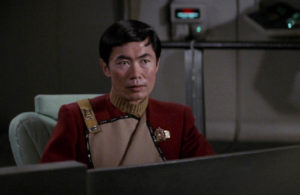 As you might recall from last week, Lee Quessenberry and I kicked off a HeadTalker Campaign to try to get 500 people to agree to have a message posted to their Twitter, Facebook, and/or other social media account(s) at noon EST on June 13.  The message would say:

“We want to change the Star Trek #Fanfilm Guidelines. Follow Small Access Trek to find out how you can. https://hdtk.co/VSsvF“

The idea was to get the message to trend long enough to bring some more attention, eyeballs, and ultimately (hopefully) members to the SMALL ACCESS campaign to get CBS and Paramount to revise at least one of the fan film guidelines.

With less than 24 hours to go, we’re just short of 100 out of the 500 sign-ups we need.  So barring a miracle (or Spock sacrificing himself in engineering), to quote Sulu, “We’re not going to make it, are we?”

No, we’re probably not.

So what does this mean for SMALL ACCESS?  Well, in the words of Monty Python’s peasant: “Not dead yet!”  In fact, we’ve taken in 45 new members in the last two weeks, which is 3.5% growth.  No, it’s not the hundreds and thousands we need, but it’s better than stagnation or collapse.  I choose to see the glass as 3.5% full.

And hey, even if we don’t grow large enough to succeed in our holy quest, we’ve still got a great group that’s spreading the gospel of Star Trek fan films…and I very much want that group to continue.

So what happens next?  I’m not sure yet.  Probably we’ll try another HeadTalker campaign with a smaller goal number.  But I’ll be contacting Lee Quessenberry this week to get his ideas for plan B, C, D, and possibly E.  We’ve got a few months before Star Trek: Discovery premieres, so there’s still time to grow this group some more.  I’m willing to give it a chance if you are.

And hey, if you happen to know 407 people with social media accounts who might be willing to help us make it to our 500-person goal before noon tomorrow, please ask them to sign up here: