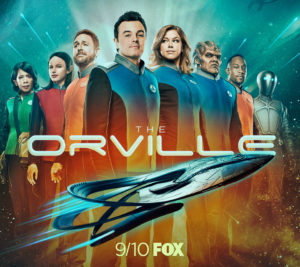 At first, I was thinking, “Yeesh!  This is as bad as the critics were saying!”  I thought of all the things I could say to try to sugarcoat my disappointment in this new series that I’d been looking forward to all summer.  “Hey, the pilot episode of Star Trek: The Next Generation wasn’t much to write home about either.”  (And it wasn’t!)  “Come to think of it, the pilots for DS9 and especially Voyager kinda sucked, too.”

But hey, if you’re gonna try to prop up the pilot of a new series by saying that other pilots sucked, too, then you’re pretty much admitting that the pilot for The Orville sucked, right?  And even if TNG, DS9, and Voyager eventually did get better, there was no guarantee that The Orville would follow suit.

But then a strange thing happened: it did get better!

In fact, by the time the episode came back from the midway 30-minute commercial break, the pilot was actually quite a lot of fun to watch.  It was exciting, engaging, well-paced, and intelligent.  Even the stupid jokes weren’t falling quite as flat as they had in the first two acts.

And in fact, The Orville doesn’t really try to hide its fannish admiration (specifically, Seth MacFarlane’s admiration) for the venerable series…including an abundance of scenes and sequences reminiscent of cherished moments from the rich 51-year history of Star Trek…

And while I have a “prime directive” here on Fan Film Factor that says “there’s no such thing as a bad Star Trek fan film,” that doesn’t necessarily mean that they’re all amazingly good either.

Many fan films fall into the trap of setting up too much backstory and providing way too much up-front exposition.  It’s all right to explain things, just don’t over-explain things…and don’t feel the need to “front-load” all the stuff you do explain.  The best fan films avoid this.  The worst are the ones with three-minutes of scrolling explanations before the opening credits and then each character introduces him or herself with their resume, family tree, and all the people they know on the ship and how they know them (and likely pissed them off or really impressed them).

This kind of front-loaded set-up began to happen with The Orville, and it  looked like it was going to drag the new series down with it.  So what changed?

The short answer is, they finally stopped with all the set-up and exposition and character introductions and just got on with the STORY.  As I told a certain well-known fan film producer recently when I read his script: “Show, don’t tell.”  Once the pilot episode reached the half-way point, the Orville writers stopped TELLING and began SHOWING.  Don’t just SAY the helmsman is the best pilot out there, SHOW it.  Don’t just SAY the security chief is super-strong, SHOW it.  If Captain Ed Mercer is really a qualified commanding officer and not just a bitter screw-up, then SHOW it.

And they did.  It just took them all 30 mind-numbing minutes to get all the goddam TELLING out of their systems!  Unfortunately, that first half hour was enough to create a negative first impression for many critics—not all, but the Tomatometer was at 11% the last time I checked.  On the other hand, the audience score on Rotten Tomatoes was 85%.  Do the viewers know something the critics don’t?

(Yeah, how about: WATCH THE WHOLE FRICKIN’ EPISODE, YOU SHORT-ATTENTION-SPAN HACKS!!!!)

When it comes right down to it, what will make or break this new series more than anything else is a very simple question: do viewers care about the characters?  With all my favorite shows, I care about the characters, and I want to see more of their STORIES.  The visual effects might be awesome (and in the case of The Orville, they certainly are…you did a superb job on the CGI, Gabe K.!), but visual effects alone won’t do it.  Cool story concepts, as well, aren’t enough just by themselves.  But when you add that to really interesting, fun, and engaging CHARACTERS that I care about, then you’ve hooked me.    I didn’t start watching The Walking Dead for the zombies.  I didn’t get hooked on Once Upon A Time just for the idea of fairy tales becoming real.  It was the CHARACTERS!

And so it is with The Orville.  I like these Planetary Union officers.  They’re fun.  They’re real to me (or as real as an all-male species with no sense of humor and a polite-but-racist robot can be!)…and that was the same thing that made me love Star Trek so much.  Sure, Vulcans aren’t real, and no human kisses that many alien women while commanding a starship.  But somehow, Mr. Spock and Captain Kirk and all of the rest of them were real for me growing up.  And as the other Star Trek series emerged, so did even more characters I cared about: Picard, Data, Worf, Sisko, Odo, Jadzia Dax, O’Brien, Quark, Garak, Janeway, Seven-of-Nine, even the Emergency Medical Hologram.  Maybe I’ll care about Commander Michael Burnham of the USS Discovery and her crew mates, as well.  If I do, then I’ll be as loyal to Star Trek: Discovery as I plan to be to The Orville.

And I do plan to be loyal to The Orville.  They didn’t have me at “hello” (or rather, “honey, I’m home…you in the bedroom?”), but they did have me for the second half of of the pilot episode.  And that was enough because, when they did grab me, they really grabbed me.

I just hope there’s more viewers like me out there because I want to see LOTS more stories about these characters.  Engage quantum drive! 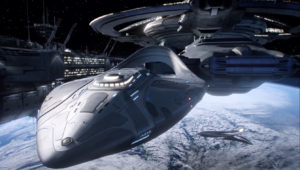 62 thoughts on “THE ORVILLE – not bad for a STAR TREK FAN FILM! (editorial/review)”