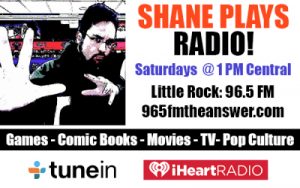 A week and a half ago, I taped an episode of the SHANE PLAYS GEEK TALK RADIO SHOW.  Shane talks to guests about all things geek, from sci-fi to fantasy to horror, movies, television, comic books, video and role-playing games, you name it!  It’s an actual hour-long radio show (like, you can listen to it in your car if you’re driving through parts of Arkansas) and also posted as a podcast.

Usually, it’s a live show, and I’m not always available to be a phone-in guest on the Saturday mornings when it’s broadcast, but this particular show had to be recorded so Shane could fulfill a family commitment.  And that allowed me to appear, as Shane has been wanting to focus on the world of Star Trek fan films.

If you’re curious to know what I sound like, or if I can hold my own in a live recorded interview, here’s your chance to find out (and yes, I noticed the typo on the YouTube still image–don’t tell Shane!)…

One thought on “JONATHAN LANE appears as a guest on the SHANE PLAYS RADIO SHOW!”