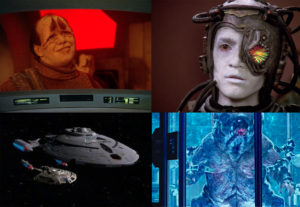 WARNING – some spoilers from the fourth episode of  Discovery.  Read at your own risk.

It seems that I’m now doing weekly reviews/ editorials about this show.  Not sure how long I’ll keep it up, but with each new episode, I realize something else that I want to share with you guys.

But before I do that…!

But it’s still not Star Trek to me.

Star Trek doesn’t make me feel sad about the present and possibly the future as well.  Star Trek doesn’t remind me of how much the world has changed (for the worse) since the terrorist attacks of 9-11.  Instead, Star Trek gives me hope for a BETTER future than what we have now.

Star Trek always made me believe that human beings can and will achieve something better for ourselves and for others.  Want to make America great, or better yet, make the world great?  Then make HUMANITY better, and the rest of what we do will follow.  Star Trek used to demonstrate those possibilities to me…episode after wondrous episode.

Because I’d like to make a point about this new series—one of many, I admit, but continuing on with my central theme that, as good as this show is, it isn’t “my” Star Trek…and why that makes me sad. 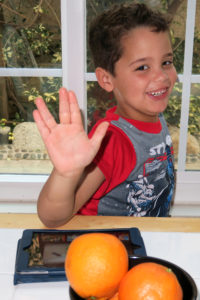 Up until now, Star Trek always made me feel happy and excited (JJ ABrams reboots notwithstanding).  And I am so enjoying introducing Star Trek to my 7-year-old son Jayden, who gets equally excited.  We watch episodes in the evening while I exercise.  We’ve completed two cycles through TOS and TAS, and just a few nights ago, we began watching Star Trek: The Motion Picture together for the first time.  (And yes, he’s actually enjoying it!)

And there’s a LOT more where that came from, Jayden!  After TMP (and after we join the Star Trek Continues cast at the Los Angeles Comic Con in two and a half weeks to watch their series finale live), we’ll be re-watching “Space Seed,” then finishing up the first six feature films, and onto TNG, DS9, Voyager, the rest of the feature films, and  Enterprise, too.

It’s not that Discovery is too mature or scary for Jayden (although that scene with Security Chief Landry from episode 4 might be pushing it).  But hey, Jayden just saw two people “melt” in the transporter of the refitted Enterprise, and soon enough he’ll watch a fully grown Ceti eel crawl out of Chekov’s bloody ear and Scotty holding the charred body of his nephew Peter Preston.  Sure, I’m not about to let my kid watch The Walking Dead with me, but I don’t feel that Star Trek: Discovery is too violent or bloody for him just yet.  Nor do I think the weird uniforms and technology that don’t match classic Trek will confuse him.  That’s not why I don’t want him to see the new show.

The reason much simpler than that: the message is all wrong.

Star Trek always inspired me…and it’s inspiring Jayden, too.  His favorite character is Scotty, and Jayden wants to become an engineer.  In fact, if you’ve got a few minutes and would like to hear one of the most adorable Star Trek podcast interviews ever, check out Jayden discussing his thoughts about “Mirror, Mirror”…

You can hear the inspiration and enthusiasm in his voice, just like it was for me when I was a kid growing up on TOS.  Star Trek is teaching Jayden life lessons, even if he doesn’t realize it yet.

That’s not to say that previous Star Trek series were intended as children’s shows.  But most were at least child-friendly and presented very positive role models (well, maybe not Quark, but he wasn’t in Starfleet).  These captains and their crews were almost always looking for ways out of a crisis where the ends were NOT justifying the means.  And to me, that’s an important concept to teach a child. 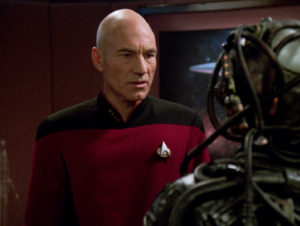 Look at the episode “I, Borg” where Picard has the option of using Hugh to end the Borg threat with one swift, almost too-easy move.  He can infect Hugh with a virus to introduce into the Borg Collective, essentially shutting them down forever.  Instead, after struggling with the moral dilemma, Picard decides the ends do not justify the means. 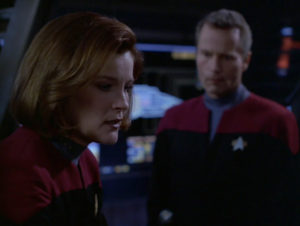 When the USS Voyager encounters the USS Equinox and learns that they’ve been capturing and killing alien beings to use their antimatter energy to “turbocharge” the ship’s warp drive, Janeway and her crew are horrified.  Is this a case of “There but for the grace of the writers go I”?  I like to think that, no, Janeway would never kidnap and trap sentient beings just to get her crew home.  She would find another way.

And yet, when I watched episode four of Discovery, the aptly titled “The Butcher’s Knife Cares Not for the Lamb’s Cry,” I thought back to the two-part “Equinox” episode of Voyager from 18 years ago (two years before 9-11) when our world still had the “luxury” of not always allowing the ends to justify the means.  And now, here we are in 2017, and in this new Star Trek series, the USS Discovery is doing almost the exact same thing that so horrified Janeway and the Voyager crew.

Star Trek has come a long way, folks…but in which direction?

Yes, the situation is dire.  A Federation mining colony that supplies 40% of the Federation’s dilithium (and is strangely not being guarded by a dedicated squadron of starships—no wonder we’re losing this war with the Klingons!) is under attack.  They’re all about to die, and only a starship that can jump between any two points in space can rescue them.  So yeah, maybe the Discovery doesn’t have the “luxury” to weigh the morals of the situation either.  If that creature can help them navigate the cosmic network (or whatever it’s called), then is anybody NOT ready to do this?!  And let’s face it, the jumpy-whumpy-spinny effect looks really cool…maybe even better than the TARDIS’ timey-whimey-spinny effect! 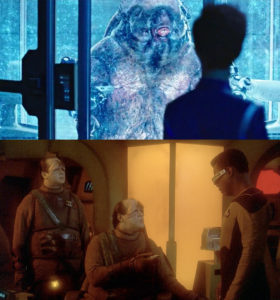 But (and this is where I finally bring in the Pakleds from TNG‘s “Samaritan Snare”), aren’t the USS Discovery and USS Equinox just looking for things to make them go?  Sure, Discovery isn’t killing the worm/navigator/Tardigrade like Equinox killed the extra-dimensional aliens, but they’ve still essentially kidnapped this thing and are holding it captive, forcing it to help them.  How is that any different than the Pakleds kidnapping Geordi LaForge, holding him captive, and forcing him to help them?

Sure the heroic captains of Star Trek and the members of their gallant crews weren’t always perfect, and they sometimes did bad things.  Longtime fans probably recognize at least one or maybe even all of the following scenes and know exactly when, where, how, and most importantly WHY they happened… 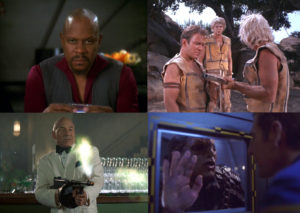 Sure, none of the above scenes was the proudest moment for any of these captains.  But that’s my point!

Star Trek was always about these NOT being the kinds of actions or decisions that defined these men.  These were the notable exceptions, and fans remember each of the scenes for the intense thoughts and emotions that went into what ultimately happened.  These heartbreaking moments of deciding when the ends DID the means, and the effect that conclusion had on these men, those scenes were made all the more powerful because they were NOT the norm but the extreme.

Of course, one could argue that Captain Lorca is also facing the extreme.  He is at war.  But that is also the baseline of his character.  He’s not a scientist.  He’s not an explorer.  “I study war,” he tells Burnham in the fourth episode.  And he seems to believe as a starting point to his decisions that the ends DO justify the means…ANY means necessary.  And while Burnham felt sorry for what they all decided to do to this alien creature, she still went along with it.  And if you think about it, the ends justifying the means is not that far removed from the needs of the many outweighing the needs of the few or the one.  That’s why Burnham mutinied against her former captain.

But again, is that the kind of lesson I want to teach Jayden?

The ends justifying the means was so often the OPPOSITE of what Star Trek taught me.  And that’s why I won’t be watching the new series with my son.  However, I will still be watching the show myself.  I enjoy it.  I understand what they’re trying to say with these characters and the situations fate has put them into. Perhaps they will even grow and evolve as characters, realizing that what they are doing to this Tardigrade creature is immoral….and perhaps even coming to the conclusion that the ends don’t always justify the means.

But that suggests that these Discovery characters will have to GROW into having the kind of moral compasses that were “pre-installed” in characters like Kirk, Picard, Sisko, Janeway, Archer, and most of their Starfleet crews.  Many on Discovery, from the captain on down, are meant to be more of a reflection of who we are TODAY (the viewers and perhaps our leaders, too).  These new characters are not an imagined ideal of who we could someday become 300 years into the future.  They are not particularly good role models for a child to look up to.

It’s still a perfectly valid approach for the creators to make—good storytelling, good TV, and very easy for viewers to relate to.  I ENJOY watching the show. And let’s face it, series like Game of Thrones and Breaking Bad don’t have characters who are particularly good role models, either.  Star Trek: Discovery, in a very deliberate way by the producers, was cut from the same dark and gritty cloth as these other modern TV series.  This is the “new normal”…and there’s nothing inherently wrong with that.

Except Star Trek always strove to be something greater.  Creating Star Trek used to be just a little more challenging specifically because the writers couldn’t just imagine a world (galaxy) with better technology and gadgets.  They had to create one with better PEOPLE.  Star Trek was the alternative to most everything else that was on television that could only show us ourselves as we are.  Star Trek always showed us who we could become!

And that, my friends, is why I feel a sadness when I watch Discovery and realize that the Star Trek I grew up with is now only a cherished memory.

…that Star Trek seems to have passed into what was.

41 thoughts on “Why STAR TREK: DISCOVERY makes me sad… (editorial)”