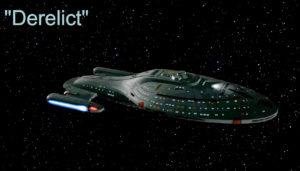 Last March, DAVID WHITNEY of STARFLEET STUDIOS in Iowa (not StarBASE Studios in Arkansas) released a VOYAGER CONTINUES short film “Derelict.”  It features Harry Kim and Seven of Nine along with a Captain Janeway voice-over captain’s log intro by Liam Holwarth-Mulgrew (he legally changed his name to add the “Mulgrew”) that you will swear sounds exactly like Kate Mulgrew herself.  It’s uncanny!While TOS, TNG, DS9, and even NX-01 era Trek fan films are fairly common, it’s rare to see a fan series that focuses on the USS Voyager.  But David Whitney isn’t afraid to tackle his favorite Trek series and has done an admirable job of bringing the world of Voyager to fan films.  In fact, “Derelict” is his second Voyager Continues fan film.  His first, the half-hour long “Raven” was released in late 2016.

If you haven’t watched last year’s 10-minute “Derelict” fan film before, now is the perfect opportunity.  Last June, David added a new opening credits sequence, which features computer-rendered shots of the Voyager flying through space, created using the fan-developed Star Trek: Excalibur online game.  It also features a number of names in the cast who do not appear in this episode but give a promise of what is to come.  Characters we can look forward to seeing in future Voyager Continues episodes include Tasha Yar, Data, Troi, and Captain Rudy Ransom.

By the way, David is looking for DONATIONS to help make his third episode.  If you want to help him, you can make a one-time donation or sign up for a Patreon by clicking here.

And now, let’s take a look at “Derelict” with that spiffy new intro…!

8 thoughts on “VOYAGER CONTINUES re-release of “DERELICT” with new introduction!”