Last October, I posted an interview with the fan film wonder from down under, Australia-based Trekker AARON VANDERKLEY.  When the fan film guidelines came out in 2016, many fans worried that it would be impossible to create a decent Star Trek fan film story in 15 minutes or less.  But Aaron had already disproven that six months earlier when he released the six-and-a-half minute NEEDS OF THE MANY, an emotionally intense NX-01 era fan film with great acting, real practical sets (not green screen), and wonderful costumes.

In September of 2017, Aaron wowed the fan film world again with yet another NX-01 era fan film, the twelve-minute THE DERELICT.  Even more intense than his first effort, Derelict cemented Aaron’s reputation as a top-notch Star Trek fan filmmaker.

But Arron wasn’t done yet!

Two weeks ago, Aaron released his third NX-01 era fan film, the nine-minute GODD MEN.  You can view it below…

After watching yet another really strong fan film, I emailed Aaron a few quick questions for the blog where I would announce the new release.  Little did I know Aaron would send me back some really fantastic, in-depth answers that turned my “simple” announcement blog into a full-on interview!

AARON: Thanks so much.

JONATHAN: So when did you do the actual filming, and how long was the shoot in total?

AARON: Good Men was shot across three days in early December 2017. Even though the script itself was about two pages shorter than The Derelict, I found that two-day shoot very stressful and badly scheduled on my part. So I wanted to pace myself as much as possible for this new film. It paid off in the end, because on all three shoot days, we finished either an hour early or bang on time!

JONATHAN: How did you find and select your cast members?

AARON: We put out a casting call for Good Men at the start of October, about a month after we released The Derelict, which was a good move because we were still in the hustle and bustle of that being circulated online. Everyone had seen it. Our main port of call has always been ‘StarNow,’ a casting and talent platform that is great and easy to use, as well as reaching out to various acting agencies in Western Australia.

Over that two week listing period, we had received 100+ applications across the four roles.

JONATHAN: Wow!  I didn’t realize there were so many actors in Western Australia who would want to be in a Star Trek fan film!

AARON: Apparently…but in the end, we were only sent 30 audition tapes to go through. It was a tough decision to make, especially as all the tapes for the role of ‘Raggedy Girl’ were of a particularly high standard.  But we eventually gave the part to Chloe-Jean Vincent who is an amazing performer. Aiden McFaull, who plays young ‘Seymour’, originally auditioned for another film I did last year but I remembered him and asked him to consider sending in a tape for Good Men.

There was no shortage of young ‘action-hero’ type actors auditioning for the role of ‘Cartwright’ and while we originally listed the part as male, we did send the character to a number of women to read for too. In the end, Stewart Mulligan won the part. It was a small role but he made the most out of it, and it was nice to have a different accent in the mix.

I’ve found the hardest roles to cast in Western Australia are middle-aged men so I was extremely concerned that we wouldn’t find our ‘Tajor’ and have to cancel this project entirely. Thankfully Frank Humphreys came along. Frank is such a considered actor, who had questions about every line and really wanted to bring the best he could to this role, trying to make it as real as possible. Frank also has an amazing face for film and watching his close-ups on the monitor during shooting was a real thrill.

JONATHAN: Now, is Tajor supposed to be from Bajor?  (Hey, that rhymes!)  I noticed the earring, but he doesn’t have ridges on his nose.

AARON: Yeah, Tajor was supposed to be Bajoran. That’s certainly the vibe we were going for costume-wise. Unfortunately, my usual make-up/prosthetics person pulled out a few days before the shoot so…that was extremely unhelpful.

But I mean, Tajor was supposed to be starting his life afresh, so we just put it down to him trying to change he’s look a bit. His earring is also on the ‘non-traditional’ ear too. Tajor’s untranslated lines at the start of the film are in Bajoran though. 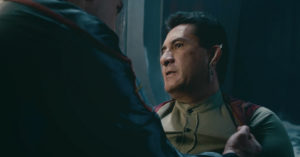 JONATHAN: This was the first of you Trek fan films that you didn’t write by yourself. How was it different working with a co-writer rather than just doing all the writing yourself?

AARON: I originally wrote an outline for the first scene of Good Men when we were coming up with the concept for the four films after Needs of the Many. From what I can tell after some digging on my computer, I had actually started scripting Good Men the same time as scripting The Derelict (I have a terrible habit of getting bored with things very quickly!). 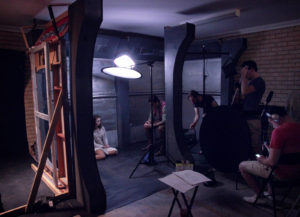 I think once The Derelict was edited, I turned my attention back to scripting Good Men and soon sat down with Alex McVey to do a script edit. Like the previous project, Alex brought to my attention all completely valid problems with the story that I didn’t want to admit to myself – Ahaha! He was weary of the fact that Good Men was another film where a woman was trying to change a man’s mind and stressed to put something in their relationship to make it different. He also wanted to explore the idea of ‘Tajor’ having to ‘own his story/life,’ as well as the Raggedy Girl’s backstory rather than having her featured simply as a device to instigate reflection.

Alex ended up sending me his own version of the cell scene to read. I had intended for Tajor to be Bajoran, so Alex had done his own research on their culture and incorporated that into the story – much to my surprise, because Alex is not much of a Star Trek fan. He also added this wonderful bit of ‘Raggedy Girl’ telling her own ‘Tajor’ experience which I absolutely loved.

From there, I did a complete page one, top to bottom rewrite of Good Men which incorporated bits and pieces from Alex’s version together with my own. It was a long process to get this one to a level where I was satisfied that Alex was satisfied…so between 16th August to 29th October 2017, we had done 6 revisions.

JONATHAN: Was there any specific inspiration for this short story?

AARON: There were two things that inspired this story. Firstly, in Star Trek we are usually presented with the ‘Starfleet’ version of events…so I wanted to explore the effect Starfleet has on these two random characters. 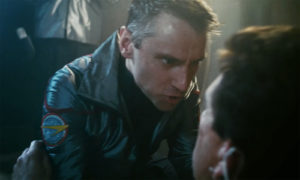 Secondly, I was inspired by some questionable moral/ethical choices thatare featured in Star Trek: Enterprise and that are discussed in the Blu-ray documentaries. At the start of Season 3, Enterprise is disabled by an anomaly and raided by a group of pirates. One of the pirates is captured and won’t reveal to the crew the location of their stolen goods. Captain Archer, frustrated that the loss of engine parts means that Enterprise won’t stop the Xindi weapon from destroying Earth, throws the pirate into the airlock and starts decompressing it, torturing him until he gives in.

At the end of Season 3, Enterprise is again disabled and sends out a distress call. An alien ship offers supplies but won’t give up their warp coil because it will leave them stranded many years from their home world. Challenged again by those same circumstances, Captain Archer orders the crew to steal the warp coil from the alien ship, transport over supplies, and carry on with their mission. No one questions his actions except T’Pol, who offers this great line: “Once you justify the first misstep, it’s easy to fall into a pattern of behaviour.” T’Pol gets extremely defensive, smashing a PADD across Archer’s desk, but her protests are soon forgotten about because the focus is shifted to her post-Trellium D addiction.

These instances are never explored further and I wanted to display a similar questionable moral/ethical situation again. Starfleet are desperate for information, and they chose to manipulate a man (whether it will benefit his life or otherwise) to get the answers they are after. Good Men hopefully will be seen as something different.

JONATHAN: How many more Trek fan films are you planning to do, and when do you expect to have your next one ready?

AARON: After Needs of the Many began to gain more attention, I developed this five-part anthology series idea titled: Star Trek: These are the Voyages, of which The Derelict and Good Men are now numbers two and three, respectively. I try to avoid saying too much about future work just in case it doesn’t eventuate (as I find these things frequently happen with Star Trek fan films). But we are currently in pre-production of the next film The Fall of Starbase One, which is very loosely inspired by the film Rogue One. After that, the plan will be to shoot film five later in the year, which will hopefully feature a full bridge set, and then that’s it!

As much as I should really be focusing on my own original work, I have really enjoyed the creative outlet that these fan films have enabled. I would like to do another anthology series of short films on a different subject matter, but I’m sure Star Trek will always be swimming around in the back of my mind.

JONATHAN: Will your fan films continue to be in the NX-era (22nd century), or will be seeing other Trek time periods?  And will we ever see any starship exteriors or anything VFX with stars?

AARON: There will certainly be ‘stars’ and phaser fire in the next one, and I think we’ll definitely need ship exteriors in number 5.

When I originally was coming up with this anthology series thing, I did think about doing each story in a different era. In fact, The Derelict was written for TOS, and I had purchased the costumes. It would have been post-ENT, TOS, early-TNG (there’s something very 80’s about it), DS9/VOY, and then something Discovery-based probably.

I saw a comic book recently that was set during Phase II, and it got me thinking about how Star Trek would’ve looked on television in proper 70’s fashion. That might be something I’ll look into at some stage…you never know!