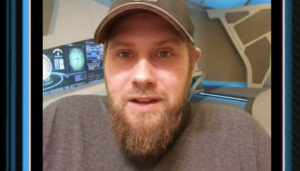 Yeah, I know I concentrate mainly on Star Trek fan films here, but seeing how this ORVILLE fan film was the work of VANCE MAJOR, I can make an exception.

As you’ll remember from previous blogs, Vance wrote, produced, appeared in, and in many cases directed nearly THREE DOZEN Trek fan films following the life and adventures of Starfleet officer Erick Minard.  And although Vance is stepping away from Trek fan films after having completed the multi-episodic Minard saga, he still apparently had one more fan project left in him…this time in The Orville universe.

The challenge with doing an Orville fan film, of course, is that the Planetary Union uniforms are twice as expensive (about $100-150) as the cheaper Halloween costumes available for Star Trek TOS and TNG/DS9/VOY-era uniforms.  And sets from the Orville are also very elaborate and not easily constructed.

Vance “solved” both of these problems.  For the uniforms, he simply didn’t bother.  He created a story in which the main character (Derek Minard…yeah, cute idea) is communicating from his quarters, apparently while off-duty and dressed in more leisurely wear.  As for the sets, a little green screen compositing can go a long way to making something look like it’s taking place on a futuristic spacecraft.  Throw in some original music by Vance’s close friend Dan T. Hawkins, and you’ve got yourself a short fan film.

The total run time is under nine minutes, even though Fox has no  guidelines limiting the length of a fan film the way CBS does.  Vance simply needed nine minutes to tell the story he wanted to.

And so the first Orville fan film “flag” is planted, and Vance Major now gets to be a footnote in Orville history.  Will other Orville fan films follow?  I hope so—although good luck on that Bortus make-up!  And will Fox decide to issue guidelines of their own?  Considering that Disney just acquired Fox, and the only fan film guidelines issued for Star Wars (which Disney also now owns) are simply for eligibility in their annual fan film awards competition, one would highly doubt it.  Also, Orville creator Seth MacFarlane is not exactly a stranger to fan films himself!