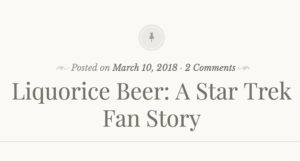 Last summer, shortly after an early version of the 90-minute AXANAR script was leaked, a detractor going by the name of Kate Stark (pretty sure that’s a pseudonym) wrote a 19-part, 30,000-word blog series essentially ripping the poor draft version of that script into tiny literary pieces…trampled under the feet of a very self-important and erudite reviewer.

Yep, 19 parts, 30,000 words.  Don’t believe me?  Just click here and then scroll down to the bottom and click “Older Posts.”  Also, that’s just July.  Remember to also scroll to the bottom right for the blogs from June!

So yeah, that happened.  And the detractors, of course, were ecstatic.  Not only was someone reviewing the Axanar script, but the reviewer seemed to be REALLY smart and really HATED it (like 30,000 words worth of utter disdain written so intelligently!).  The high-fives and posted photos of pies were flowing like water over Niagara Falls on the detractor Facebook groups for quite a while.

But then…frustration.  There was no new Axanar anything left to review and eviscerate.  The 19-part blog series was all but forgotten.

Until last week, that is.  I rescued blogger Kate Stark from endless months of boredom and obscurity by releasing the first-ever Axanar illustrated short story: “Why We fight.“  Finally, the reviewer’s poison pen—er, keyboard—could come out of hibernation once again!

Actually, it’s a very intelligent review (read part 1 here).  You know it’s intelligent because the reviewer almost immediately compares my short story to one of Ernest Hemingway’s works (and of course, finds my story lacking).  By the time you get to part 7, I’m being criticized for everything from bad character development to using too many question marks and exclamation points.  Hey, that’s my thing!!!  Isn’t it???

I wasn’t going to say anything, but then Kate Stark did something that changed my mind…

My loquacious reviewer decided to show me how it was done by rewriting my short story from scratch (in just a few days) in a way Kate thought it would be better.  Yep, you can read it here.  Go ahead; I don’t mind.  It’s actually fairly decent.  I don’t mind admitting that.

So add another 2,600 words for the story, and Kate has now spent more than 7,600 words on me.  And that’s when I decided to spend about a thousand words (well, 1,346 words with this intro) responding to the review and the rewrite.  After all, I’m assuming Kate would feel better knowing I read both the review and the new short story.

And thus did I write the following comment and post it on Kate’s blog page that included the rewrite of my story.  And since I likely get many more readers (not bragging—Kate’s blog is just way more niche than mine), I figured I’d reprint it here to share with all of you guys…

A little over-written (like your review), but basically decent. I know what you were trying to do, and I used to do that, too, when I was younger: “Never criticize another unless you can do better yourself.” So you showed off your talent. Totally fair.

Sometimes a cigar is just a cigar, though. “Why We Fight” was never written to win any awards or be better than Hemingway (thanks for mentioning him, though; I’m flattered even if I didn’t measure up). Instead, I just wanted to have some fun with the short story. I can write something with more gravitas and emotion like you just did; it isn’t that hard either (as the rapidity of your own efforts demonstrates). But that wasn’t what I was going for. Instead, “Why We Fight” was just an itch I wanted to scratch. The story came out of me in just a few hours…if that. I didn’t put too much time into revisions because, frankly, it was mostly the way I wanted it after only a few pass-through edits.

Many people enjoyed it—it’s had a few thousand reads so far—and I’m pretty happy with it myself with the words and the punctuation marks (thank goodness exclamation points are free!!!!!), the Oxford commas, and the pretty pictures. I’m certainly flattered that you felt strongly enough that you wrote nearly 6,000 words (yeah, I counted) about my 1,900-word short story. And I read every word that you wrote. It’s all fine. Everything you said is perfectly valid. But to be honest, it wasn’t really necessary. This was a fun little diversion for me. I already got my six-figure book deal back in 2011(yeah, bragging…because I can), which is enough for one lifetime for someone who was never looking to become a professional writer anyway. I just enjoy putting words together.

In fact, the song in that video I just linked to is the reason that I don’t review Star Trek fan films on Fan Film Factor. I certainly could. I live in Hollywood and could certainly tell most of those folks a thing or three about screenwriting, framing shots, editing, lighting, using a friggin’ clip mic on a windy day, etc. But that’s easy. What’s not easy is actually MAKING a fan film…even a crappy one. And I always give credit where it’s due.

These folks deserve my respect for putting themselves out there. And any negative review I post criticizing those fan producers doesn’t serve to make me any grander, but it can have a deleterious effect on these people who only wanted to share their love and passionfor Star Trek with others. Like me, they didn’t ask to be reviewed. Unlike me, many of them might end up feeling so discouraged that they never try to make a fan film again, never strive to be better and go farther with their efforts. My words have the potential to wipe away their feelings of fun and accomplishment and replace them with embarrassment and despair.

I don’t ever want to be that guy. Do you? (Oh right, already answered.)

So as I review the reviewer, I find you lacking only in that you felt you needed to write this magnum opus in the first place. I know that, deep down, you wanted me to read it. I did. I’m certainly impressed with your smarts and literariness (hmmmm…spell check didn’t catch that; I guess it’s really a word–I was trying to be facetious). But it’s also clear that you had an Ax to grind, and so I suspect I could have written “The Tempest,” and had Prospero been named Garth, you still would have found something to criticize (in seven parts, no less!)

I’m fine with what I wrote, K.S. I love how it came out, and I love how it’s energized the Axanar fan community all over again. And yeah, it was meant to be a geek-fest for those wanting to know the names of all the Ares-class ships (alphabetically, in fact…that was the drinking game, by the way) and see young versions of Matt Decker and Ron Tracey. And yeah, it had Garth being the legend. That’s what we Axanerds want. Garth is like Kirk, and Kirk would have delivered the same kind of speech (as he did in “Balance of Terror”) because Kirk’s also a bit larger than life. No need to write anything different…at least for me. And ending the story with Garth telling Sonya to order a drink, tying into Sonya’s line in Prelude, that was just Axanerd icing on the cake! For those of use who loved Prelude, this story was perfect.

I’m sorry if you didn’t like it (it was hard to tell from your review), but hey, as we say in America, “That’s why Baskin Robbins has 31 flavors.” (Do we actually say that? Well, I say it!) As for writing 6,000-word reviews, well, as you can see from that video I linked to, you can do just as much damage with four lines.

Something to think about perhaps?

I awoke this morning to a polite and upbeat response from Kate, which I’ll share with you now.  Does Kate get it?  Do I?  I’ll let you folks decide…

Thanks so much for such a thoughtful reply to the “Why We Fight” critiques.

I think you’re correct that it doesn’t take more than a line or two to destroy something. That’s why Twitter is the death of discourse. A sporking-style critique, however, shouldn’t set out to destroy something. It should set out to understand something. It looks for what works, what doesn’t, why it does or doesn’t work, how it does or doesn’t work, and how it fits in with a broader understanding of stories. They’re much closer to informal literary analyses with a bit of sharp humour than they are, say, a movie review.

That’s why there’s so much overlap between writers and sporkers. Only people who love the craft will spend so much time with something that doesn’t work for them. It’s also why it was so important to me that I post my own story. It was a demonstration that I am a part of the community, not apart from it.