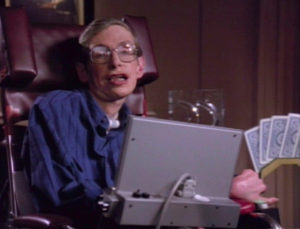 I suppose I could cite the Star Trek connection: PROFESSOR STEPHEN WILLIAM HAWKING was the only person to ever play himself on an episode of any Star Trek series when he appeared in a Holodeck simulation at the beginning of TNG‘s “Descent, Part 1” in 1993.

But I would have dimmed the lights of Fan Film Factor regardless of Hawking’s appearance on Trek because…well…because we was Stephen Frickin’ Hawking, dammit!  He was cool.  He was a rock star.  He was almost impossible.

What I mean by that is Stephen Hawking should never have happened.  His disease—amyotrophic lateral sclerosis (ALS)—is a cruel killer.  It takes away your body while it leaves your mind trapped inside.  By all predictions of his doctors back in 1963 when he was first diagnosed, Hawking’s expected lifespan was optimistically two years.  By all rights, Stephen Hawking should have been long dead before the first episode of Star Trek ever aired in 1966.  But as we all know, that never happened.

Instead, this hyper-brilliant man found a way to live on for more than FIVE decades beyond his original death sentence.  But he didn’t just live—that would have certainly been miracle enough—but he thrived.  He taught, researched, wrote books, toured and lectured, and became quite the media celebrity.  Hawking opened up the wonders of the universe and science to so many who—like me—had absolutely no idea whatsoever what the heck he was taking about!  (Yeah, I tried to read a Brief History of Time.  I even began my time at Cornell University in 1985 as a physics major.  That didn’t last.  But my love and respect for science lived on.)

Hawking made science and nerdiness seem somehow cool…which was really odd, if you think about it.  Even without the wheelchair and the debilitating motor neurone disease, Hawking still looked like a complete Poindexter…the kind of guy who would have his lunch money taken on a regular basis by bullies who would leave his underwear stretched up to his shoulders.  Add in the monotone computer-synthesized voice, and this guy was sure to be picked on relentlessly by the knuckle-draggers of the world.

As weird and awkward as any of us Trekkies and sci-fi geeks ever were, we never came close to Stephen Hawking!  Dopey grin, thick glasses, always talking about science—and the kind of science that no one else at the party has a prayer of understanding—this guy would have been the ultimate outcast and outsider in any other universe.

But in our universe, Stephen Hawking was a total ROCK STAR, a genius god of intellectualism, and an inspiration to so many.  He was known the world over and even became synonymous with phrases like “total super-brain” (in a good way, of course).  Oh sure, we still call people who are really smart “Einstein,” but “Hawking” would work just as well.

And not only was Hawking smart, he was FUN!  He never publicly went, “Oh…woe…is….me!” in that computer voice.  He kicked ass!  He not only appeared on Star Trek: The Next Generation, he also guest starred on The Simpsons, Futurama, and multiple episodes of The Big Bang Theory.  His synthesized voice actually appeared on a Pink Floyd album.  He even did a video segment with Monty Python…all while trapped in a body that couldn’t move or even speak.

To me, that’s the greatest inspiration I can imagine: the triumph over such overwhelming odds…not only by himself but always accepting the help of others, which Hawking could never survive without.  Stephen Hawking took a village, and his triumph is also the triumph of humanity itself—friends, family, colleagues, and even complete strangers—coming together to help and support him.  Stephen Hawking is both a triumph of the individual and of the community.  This man who should never have happened overcame everything—even the Theory of Everything!

I have scientist friends (teachers and folks at JPL) who used to rag on Hawking and list for me a bunch of current physicists who blow Hawking away with both their intelligence and the elegance of their theories (that I’ll never understand).  And that’s fine.  For me, it’s not a smartness competition…’cause I’d lose badly.

No, for me, it’s all about inspiration.  Not many scientists have done so much to reach out to those of us who don’t understand the difference between dark matter and dark energy, couldn’t explain what existed before the big bang, and can’t fathom why in heck space-time is expanding but galaxies close to ours are actually moving toward us!  But I still WANT to know.

And Hawking did that.  Albert Einstein did that.  Carl Sagan did that.  Neil deGrasse Tyson is doing that along with Michio Kaku.  They kept and still keep scientific wonder and curiosity alive inside the minds of the rest of us.  And they even inspire some special ones to pursue science themselves because they make it seem so cool (and it IS cool!).  And in today’s world, where science and facts seem to be so easily dismissed with 140 or 280 character tweets, that kind of inspiration is critical to both our species and to the planet itself.

Thank you, Stephen, for being possible!