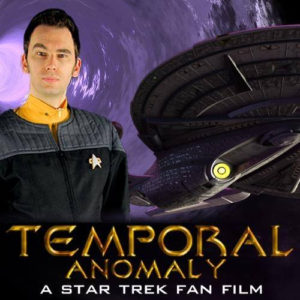 Well, folks, there’s some good news, some bad news, and some rather shocking news involving the fan production STAR TREK: TEMPORAL ANOMALY.  As you might recall from this blog update that I posted last month, CBS had contacted show-runner SAMUEL COCKINGS with some concerns over his soon-to-launch fan film.  Weeks earlier, Samuel had released  this trailer that raised a few red flags with the corporate Star Trek copyright owners.

Specifically, there were four concerns.  The first was easy to fix.  The fan film guidelines don’t allow for the name “Star Trek” to be part of the title.  No problem there:”Temporal Anomaly – A Star Trek Fan Film” it is!

The second problem was length, about 50 minutes long.  The guidelines specify a maximum of two 15-minute separate fan films.  Of course, Star Trek Continues released five full-hour episodes after the guidelines were announced (four of them having been filmed and produced after the announcement), and STC was never stopped by CBS.

The third problem was that the trailer included footage taken from actual TNG movies with Picard, Riker, Data, Worf, and Troi on the bridge.  Using existing Trek footage is a no-no.  Granted, Samuel only needed it for a brief intro sequence at the beginning and a short epilogue at the end, but still…not kosher with the suits at CBS.

And finally, there was the music, nearly all of which is existing copyrighted scores from various Star Trek TV series.  Although many other fan films liberally use existing Trek background music, Temporal Anomaly had gotten on CBS’s radar, and the studio wasn’t going to ignore the obvious.

So what’s the good, bad, and shocking news?

In short, the good news is that Temporal Anomaly WILL be coming out after all.  And the shocking news is that CBS actually gave a small guideline EXEMPTION allowing Samuel to release his fan production in THREE parts instead of just two.  That’s an encouraging bit of cooperation from CBS and should absolutely be acknowledged as significant.

However, the bad news is that the public release will need to be delayed until later in the year while Samuel finds new music (any aspiring composers out there looking to work for free???) and re-edits the production to re-do the intro and epilogue and incorporate the new scoring.

A “director’s cut” will be distributed shortly directly to the cast, crew, and donors, but most fans won’t see that version.  But Samuel intends to have a public version released as soon as he is able.

Our discussions with CBS have now concluded and a plan reached.

Temporal Anomaly was written in 2013 coming off the success of SGU: Distant Hope. Since SGU:DH was a hybrid of show footage/live action and Green screen I wanted to do that again for Temporal Anomaly. Being a second year student at University in 2013, it was all about the story I wanted to tell since I did not expect the film to get much fan attention back then.

Temporal Anomaly was 10x more ambitious and complex and while my vision was solid, my visual effect abilities were nowhere near the quality I can do now. Hence each year or so, I have gone back and re-worked things as my skills have improved. March 2018 was to be the release date and finally get this project out.

I’m am of course very well aware of the guidelines, having read them for the very first time on the train down to Ticonderoga to visit the Star Trek New Voyagers sets (when they still were fan film sets) the DAY they were released.

My film was written long before the guidelines and while I had not assumed the “grandfather” clause was a real thing, it was not based on stubbornness that I continued to work towards finishing my 2013 planned film. Having seen multiple other fan films released push against these guidelines had also made it unclear as to the exact landscape for older and smaller productions.

I wanted to try and release Temporal Anomaly as written, as intended and as a flowing creative whole. If CBS were to contact me, then I would deal with it if/when it came. I did get an email and the process of working with CBS began. Once again, I thank CBS for their conduct and tone in these matters. They have been professional, polite and wanted to work WITH me and not against me.

So now to the future of Temporal Anomaly and where we stand with a release. This is when the production will split into the “Directors Cut” and the public cut. The Directors cut will be the full 50 minute edit with the intro minute including show footage as written. This version will go to all the backers that made this film possible, the cast, the crew and be on the few DVD perks that were promised in 2013. This version will NOT be released publicly and as such are separate to what the guidelines talk about, which is on the public release of a fan film.

Per my discussions with CBS, Temporal Anomaly will be released later this year to the public in 3 parts with a new soundtrack and without the first/last scene. I will construct a new intro to put a similar message across to the Directors cut, but without any show footage. This has to be carefully thought through as story pacing is very important in a production.

The last scene will also be changed although hopefully kept spiritually the same since it is the emotional payoff for the entire production.

Other parts of the production that I won’t go into now have been given a guideline exemption by CBS just as Star Trek Continues and others have in different ways. The changes I am making are based on my discussion with CBS to allow the production to be released in an acceptable form by both parties.

Having said all that, given that the edit is 99.99% done with only 7 CG tweaks to make, a 3D door to put in and 3 bits of ADR left…having to re-edit a whole new sound track, new intro and work out the split points to allow the pace to still work will take some time and so there is no immediate plans for a public release.

I am both busy with my day job and several other exciting projects, both in the Trek world and beyond. I had hoped that March would have let me have put Temporal Anomaly out and move on with my life but for now, that will only be the case as far as cast/crew/backers are concerned.

Any future projects I am the writer/director/creator for will lend themselves to a post guidelines world and I hope to be able to announce something special for the Trek community soon. I have been working on something since January and given my discussions with CBS about TA, this new project only needs 2 minor tweaks. Both have been addressed and in fact add to the quality of the piece.

Lots of exciting stuff to come and I hope to be able to do the fans proud in anything and everything I do.