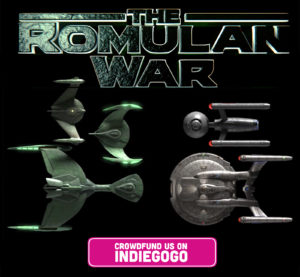 Yesterday I mentioned that the SKY FIGHTER Indiegogo only needed 10% more to reach their goal of $25,000.  And—poof!—they had done it by late afternoon!

So now I’m mentioning the the Indiegogo for THE ROMULAN WAR, which is only $1,705 short of its $10,000 goal with just FOUR days left.  Yeah, it would’ve been cooler to say $1,701 dollars short, but either way, they’re knocking on the door of being completely funded.

I asked show-runner MARK NACCARATO what this final $1,705 will cover.  What if they don’t make it?  What won’t be in the final version that otherwise would have if you (yeah, I’m talking to YOU, Mr./Ms. reader!) had just donated ten or twenty bucks.

Here’s what Mark told me…

That final amount is going to allow us to properly visualize the legendary BATTLE OF CHERON. Those of you who know your Trek history know that Cheron was the final battle of the war where Earth marshaled its forces for one last desperate assault to stave off complete annihilation by the Romulans. This sequence will be everything you think it should be. In a word, it will be EPIC!

So do it for Cheron, folks!  Do it for jaw-dropping visual FX!  Do it for Starfleet so we can win this war!

To give fans a taste of what this battle might look like, Mark just released a final trailer for the campaign, titled “Game Changer.”  The video introduces fans to the character of Admiral Matthias Jefferies, who is an expert on the weapons and tactics used by Earth during the Romulan War of the 22nd century.  Although the visual FX are still only early renderings and will look MUCH better in the finished fan production, they still look pretty darn awesome and also introduce the new Yorktown-class starship.

Take a look and then click here to donate while there’s still time!

2 thoughts on “THE ROMULAN WAR releases a GAME-CHANGER!”