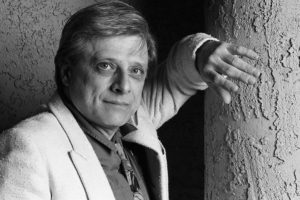 HARLAN ELLISON was a literary force of nature.  Heck, screw “literary”!  He was just a force of nature.  Period!  He had opinions about everything…and none of them were at all subtle.  In fact, if he were here at all right now (and gave a crap), he’d probably tell me that writing a one-word sentence “Period!” followed by an exclamation point to hammer home my previous sentence was just plain stupid and amateurish.  “But keep writing,” he’d probably tell me.  “It’s the only way you’ll stop being so terrible!”

Actually, Harlan once called me a “god.”  True story.  (I’ll tell you that one in a moment.)

Most Trekkers probably know Harlan Ellison as the person credited with writing the widely-considered best episode of TOS, “The City on the Edge of Forever.”  Harlan would have told you that he did NOT write that episode.  He wrote a script for that episode that Gene Roddenberry demolished with rewrites and turned to a giant, steaming turd.  Don’t believe me?  Read Harlan’s book on the subject.  He pulled no punches.  (Me?  I still like the way the episode turned out.  But don’t tell Harlan that.)

This souring experience with Gene turned into a decades-long war that makes anything we’ve got in the world of fan films seem like tiddlywinks!  Harlan never missed a chance to eviscerate Gene Roddenberry, and I recall my first time ever seeing Harlan live on stage (at I-CON in Stony Brook, NY in 1991) and hearing him discuss Gene, who was in failing health at the time.  Not being familiar yet with the feud, I learned about it VERY quickly.  To this day, I remember what Harlan said about Star Trek‘s creator:

That man did not mince words…ever.

I remember later in that live appearance, Harlan had used the term “midget” in one of his answers.  A few questions later, an audience member raised his hand.  “Mr. Ellison, a little while ago, you used the the word ‘midget.’  We prefer the term ‘short person.”

Harlan didn’t pause for a nanosecond.  “Look buddy,” he said, pointing at himself, “I’m 5-foot-3.  I’m a short person.”  Then he pointed at the audience member: “YOU are a midget!”

Political correctness was a waste of time and braincells for Harlan.  He was too busy writing, reading, talking, living, learning, critiquing, pissing people off, and making his opinions known by anyone who would listen.

But Harlan wasn’t just a cranky old curmudgeon.  He could also be a very funny, not-so-old curmudgeon.  At that same convention, I was lucky enough to see him sitting on a panel with the legendary Stan Lee and Julius Schwartz (Stan’s contemporary over at the Distinguished Competition).  At the age of 57, Harlan was the youngster of the group.   These “three live Jews” (as I dubbed them) joked, reminiscenced, kvetched, and opined…and I have never laughed so much or so hard at any convention since!  The audience was in hysterics for 90 straight minutes.  Ah, to have had a camera phone back then!

If you want to read more about Harlan’s amazing career, the list of things he’s written (you can find it on his Wikipedia page) reads like a damn phone book!  And if Harlan were here, he’d probably say, “Yeah, you ignoramus, a PHONE BOOK!  We used to use those things, remember?  Half the people alive today have no f-cking idea what a phone book is, and they never will!”

I used to joke that Harlan wrote faster than I could read!  That was probably true.  But despite writing so much, most sci-fi fans probably only know Harlan Ellison from Star Trek and Babylon 5, where he served as conceptual consultant.  Once at San Diego Comic Con (while B5 was still on the air), someone asked creator Joe Straczynski what Harlan actually did as a “conceptual consultant.”  Joe’s answer:

I realize this isn’t a typical eulogy, folks, but Harlan wasn’t a typical person…not by a long shot.  And even though I never knew him personally like some people, it was nice just knowing that he was still out there somewhere bitching about something.  Now…not as nice.  I’ll miss him.

So…why did Harlan call me a god?

Several years ago, I spent a Sunday in Harlan’s presence at a used bookstore on Ventura Blvd. called Dangerous Visions.  He was doing a challenge to write a complete short story in the window while people watched.  At one o’clock, Chris Carter (of X-Files fame) dropped off an envelope with the title inside: “The 102-Year-Old Pregnant Corpse.”  Harlan now had to write a short story with that title and theme.

I waited for Harlan to start typing.  After all, he only had a few hours!  But he kept chatting with people about all sorts of things.  As I said, he had an opinion about nearly everything…

As he chatted, someone gave Harlan a coffee. “Hey, anyone got any Sweet’n’Low?” he asked.  No one did.  Harlan took a sip. “Seriously?  No one has any Sweet’n’Low?”  The crowd of about 15-20 people (including me) shuffled silently.  Harlan got back to talking about this and that.

A few minutes later, almost absent-mindedly, he took another sip.  “C’mon. You women here.  You’ve gotta have something in your pocket books.  You always carry sweetener.  The pink stuff?  The blue stuff?”  No one had anything.

The third time this happened, I wondered why no one from the store was getting him sweetener.  It was a small store, and everyone seemed to be riveted by what this vertically-challenged guest had to say.  No one dared miss a second!  But, sheesh, this guy needed to sweeten his coffee!!

Someone had to do something!!!

I decided to be that someone.  Tearing myself away from the group hypnotic trance of listening to Harlan, I left the store and walked down the street. I didn’t know the area, but Ventura Blvd. in Sherman Oaks isn’t exactly outer Mongiolia.  Before I’d gotten to the next corner, there was a cafe.  I went in, asked for some Sweet’n’Low, and walked back.

Harlan was still chatting, of course (when the heck was he going to start writing???).  Anyway, I gently pushed my way through the crowd and handed Harlan his sweetener.  He looked at me, took the pink packets, and said to the crowd in a loud voice, “Everyone, this man is a god!”

To this day, I still tell people that Harlan Ellison once called me a god.  It’s kind of a life highlight along with getting married and becoming a father.

Anyway, Harlan did eventually get himself into the window to start typing…on a typewriter!  This was, I think, 2008 or something.  Who still used a typewriter???  Harlan Ellison did…always.

I couldn’t believe the speed.  And as one page after another was taped up in the window, I looked for typos.  No one types that fast, off the cuff, from sheer inspiration, and doesn’t make any mistakes, right?  Harlan Ellison did.  Not a single typo anywhere…amazing!

So those are my memories of Harlan Ellison…a unique voice in the universe that was NEVER afraid to make itself heard.  And wherever Harlan is now, I am certain he’s already forming some very strong opinions about it…and letting people know!

Harlan, thank you for joining all of us here on earth for 84 wonderful, boisterous, challenging, turbulent, and (most of all) fascinating years.  You made the world better, smarter, and perhaps just a tad grumpier.