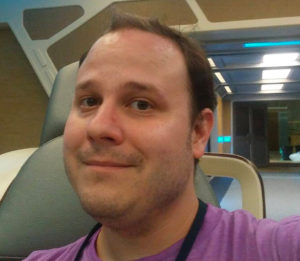 Some of you know GABRIEL KOERNER from his work on fan films like Star Trek Continues and BSG: Second Coming.  Some know him as “That kid from the Trekkies documentary.”  And of course, he currently does CGI for the Fox TV series The Orville along with an impressive list of other Hollywood projects on his IMDb page.

Of course, he’s also a well-known AXANAR detractor, posting frequent comments to social media and even to this blog disparaging ALEC PETERS and the Axanar production.  In fact, just this past Monday, Gabe referenced Alec (without naming him directly) in this comment to Fan Film Factor.  The blog title read “Is TREK crowd-funding in TROUBLE?”  Gabe answered: “Yes. Thanks to the actions of ONE careless, unethical, reckless irresponsible individual’s actions.”

Ironic that Gabe would use the words “unethical,” “reckless,” and “irresponsible” as, just a few hours later, a video would be posted that included recordings of nearly a dozen harassing voicemail messages left by Gabe on the answering machine of BARNEY CORNETT of West Virginia.  In the video, Barney says that these are just a small sample of nearly 100 harassing calls that he and his family have received over the course of the past five months.

There’s no need to ask whether I’ve confirmed the veracity of this video.  Gabe has since admitted to making these calls in this public post to the Axamonitor group on Facebook:

An now, my own apology for the length of the rest of this blog, but I want to share a series of increasingly disturbing e-mail exchanges I’ve had with Gabe since Monday night.  (Since none of this was off the record, I feel I can share the exchange here.)  I’ll explain my reasons for deciding to do this after we get through all of the e-mails, keeping my comments minimal until the end.

END_OF_DOCUMENT_TOKEN_TO_BE_REPLACED 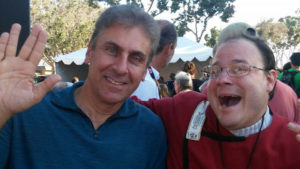 On Saturday, GABE KOERNER, a well-known detractor of Axanar and ALEC PETERS, sent me the following e-mail out of the blue:

I’ve given up on the Idea that the guy is some kind of willful criminal. He isn’t. He’s just a mix of Massively Egotistical and Massively Incompetent which can LOOK “criminal” but it really isn’t.

Yeah, it’s obvious that Gabe isn’t ready to finally stop trying to disparage Alec (frankly, I doubt that Gabe will ever be able to completely let this go).  But this was a HUGE revelation and step forward for someone who, like many detractors, had been calling Alec all kinds of synonyms for crook, thief, criminal, liar, embezzler…the list goes on and on!

At the heart of the most extreme detractor arguments has been a contention that Alec had willfully taken money from Axanar donors to fund a lavish lifestyle of things like jet-setting around the world, eating sushi, paying for health insurance, and buying new tires for his car.  I’ve seen the full Axanar financials—endless pages of spreadsheets!—and I’ve tried to explain about a million times here and elsewhere how this wasn’t the case at all.  It was like trying to reason with jello!

And even if you’re one of those people who thinks the Axanar books were somehow cooked, the fact remains that the goal of embezzling is to come out with MORE money, NOT less.  And yet, Alec Peters has put in close to a quarter of a million dollars of HIS OWN money (generated from the sale of screen-used props from his extensive collection) to fund this project.  Of course, you can argue whether or not a studio should have been leased/built or simply rented, But even Alec himself now agrees that he should have filmed Axanar on James Cawley’s TOS sets in upstate New York as originally envisioned.  So that’s not the point today.

Now personally, I have no idea if any other of the detractors on their various public and secret Facebook groups are now in agreement with what Gabe has just acknowledged…and frankly, I don’t feel like checking those crass and vitriolic places to confirm.  And I don’t really have to.

The story today is simple.  I received an e-mail on Saturday, unsolicited, from someone who is a good friend of, and has been conversing with, former Axanar director ROBERT MEYER BURNETT.  And in this e-mail, Gabe Koerner finally gives up on a long-standing claim that he has clung to that Alec Peters is some kind of willful criminal.  That’s a BIG step forward.

And if Gabe can finally move past such a deeply-held belief—despite the other digs that he still feels he must make—then maybe there is some hope for other Axanar detractors out there.  Maybe…