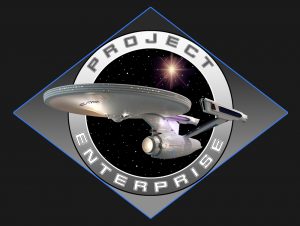 Recently, I featured a 2-part interview with Paul Olsen, the man responsible for the breathtaking opalescent paint job of the refit Enterprise from Star Trek: The Motion Picture.  Together with the designer and builder of the original model, Paul is trying to raise $3 million to recreate that model, bigger, more sturdy, and with all modern electronics within a custom 4D viewing chamber.  The model would travel around the world to be enjoyed by Star Trek fans everywhere.

But $3 million is a lot of money, and way beyond way could be raised from simple crowd-funding.  So Paul is planning to do a concerted public relations campaign, coordinated by a major PR company, targeted at bringing in major corporate sponsors like Enterprise Rent-a-Car, SpaceX, Boeing, and many others.  So instead of needing $3 million, Paul just needs $50,000 to fund the PR effort.  In fact, the PR effort is only intended to raise the first $450,000 to get them started.  Then, with the studio and materials in place, Paul can negotiate documentary rights to bring in the completion funding of $3+ million over the two years of the rebuild.