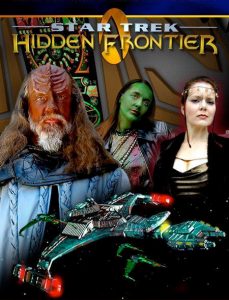 Last week: we looked at the trailblazing fan series Star Trek: Hidden Frontier, one of the harbingers of the “modern age of Star Trek fan films.”   From its humble beginnings as just a fun activity for the STARFLEET fan club chapter USS Angeles, Hidden Frontier turned into a fan film production dynamo for more than a decade, going on to produce 50 episodes over seven seasons plus five spin-off series and even cross-overs with other fan series.  Hidden Frontier broke new ground in using green-screen compositing, generating home-made 3D visual effects, recasting established characters from Star Trek canon, and even featuring the first gay Starfleet officers in a fan film series (sorry, New Voyages, HF beat you to it). END_OF_DOCUMENT_TOKEN_TO_BE_REPLACED

As I mentioned in a few of my previous articles, the dawn of the “modern age of Star Trek fan films” arrived in the year 2000 with the release onto the Internet of Star Trek: Hidden Frontier.  It was the quintessential fan film: Trekkie actors with little or no formal training, cheap store-bought or home-made costumes, zero budget, minimal sets, basic-level storytelling (that’s a euphemism for kinda sucky writing), and dubious sound and image quality.

But Hidden Frontier also had heart – a great deal of heart – plus a deep love for the franchise and determination to create fun and original Star Trek on a fan level.