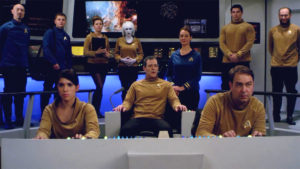 Ten years ago, Kenny Smith wrote a rough draft for a Star Trek fan film that he wanted to direct. It focused on Captain Robert April, the first person to command the USS Enterprise NCC-1701.

Smith wanted to tell the story of the USS Enterprise’s initial mission, to see her being built in spacedock—along with the fleet of twelve sister ships in Earth orbit—and to watch her launch for the first time towards indescribable adventure.

Smith owned the sci-fi convention company I-Con and recently, at one of Smith’s conventions, he met a film producer who was looking for a project to work on. Smith told the producer about his idea for a Captain April fan film, and he loved it. Knowing that the fiftieth anniversary of Star Trek was quickly approaching, they set to work on the script. 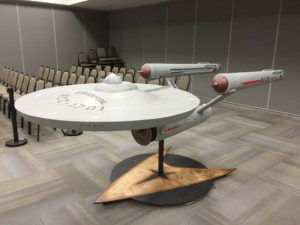 They also managed to convince Emmy-nominated Lee Stringer (who worked on numerous science fiction projects including Star Trek: Voyager, Battlestar Galactica, and Firefly, to name just a few) to join their team. And to make their visual effects look true to the original series, rather than just creating computer-generated 3D effects, the team went on to build an 11-foot physical model of the original Enterprise…along with sets as close to those in the original pilot as possible.

Also notable about this fan film is the way it was funded. In March of 2015, Smith began a crowdfunding campaign on Kickstarter with a goal of $130,000. But after two months, he’d raised only $30,000 from just 67 backers. Instead of letting the campaign end in failure, Smith canceled the Kickstarter and announced that he would self-fund the project.

Although they missed their original target release date of September of 2016 (to coincide with the 50th anniversary of Star Trek), they’re still making impressive progress.  How impressive?  Take a look at this: