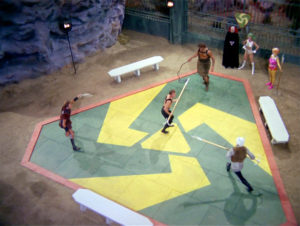 If you tend to read the comments sections of my blogs, you know that I get quite a lot of posts from Axanar detractors looking to accuse Alec Peters or Axanar of this or that crime or incompetence or atrocity.  Seldom do I trash any of these comments, and I usually provide some kind of response because, well, isn’t that what a blogger is supposed to do?

But lately, it just seems like I’m spending hours and hours each week just reading and responding to all of these angry and challenging posts, leaving me less time to focus on fan films and even my family.  Granted, I still prioritize the latter two over doing any kind of response writing, but that just means I write most of my responses really, really late at night.  Or sometimes I have a little time during the day and try to sneak a few responses in.

This happened yesterday afternoon as I was having a marathon session of dealing with detractors like Rand Johnson saying things like this:

Let me remind you that it was you who FIRST started being a condescending, egotistical, pompous, self-righteous, conceited, ego maniac, holier-than-thou, hotshot, puffed-up, self-centered, snobbish and stuck-up blogger who defends a man who made outlandish claims he was going to make a fan film then spent all the money on crap he did not need to make a fan film. Then you attacked anyone who criticized that man and your hero worship of that man. Or criticized you for promoting and defending that man who took donor money and used it as personal income to financially benefit himself and his associates.

Man, just reading that again exhausted me!  And that’s just one comment, folks.  I get so many.

But then I received a call that has changed everything…

Mike Bawden, Axanar PR guy, helped me get this blog off the ground last year.  And we still chat fairly regularly.  He’s a very smart businessman, a friendly and upbeat individual, a great judge of character, and—as I’ve discovered many times in the months that I’ve known him—a very wise and insightful fellow.

When Mike returned my call yesterday, I was not in a good place. Maybe it was daylight savings and not getting enough sleep. Maybe it’s tax season. Or maybe—just maybe—it was all these darn detractors submitting one irate post after another after another.  I hadn’t intended to spend any of the call talking about them, but when Mike opened with, “Hey, man, how you doing?” before I could even think, I found myself saying the following…

“Remember Kirk at the end of ‘The Gamesters of Triskelion’ when he had to fight three different Thralls at the same time?  And if Kirk didn’t completely kill one and only injured it, another fresh Thrall would come in and take its place?”

“Yeah…” he said, having no idea where I was going with all this.

“Well, I feel like Kirk right now. And all these detractors are like those damn Thralls! The only thing that they have to do is just gang up on one guy. I, on the other hand, have to spar with all of them simultaneously…all day long! It’s frickin’ exhausting, Mike.”

“Why DO I do it?” I repeated, in a lighthearted tone.

“No, seriously,” Mike said. “why do you do it? It’s not like they’re adding anything to Fan Film Factor. You’ve got a great blog, Jonathan.  Why waste your time with conversations that don’t add anything to it? Life’s too short.”

“But they submit their comments. It wouldn’t be polite not to respond,” I answered.

“Are they being polite? I’ve read their comments, Jon.  Hey, think about having a blog as being like you’re the host of a dinner party. You invite a lot of people over to have fun, chat, get to know each other. And you, as the host, wander around talking to your guests and making them feel welcome. And then you bring out food for everyone to enjoy. Think of Fan Film Factor as a big party, a friendly place to hang out…only there’s blog entries to read instead of appetizers to eat.”

“So let’s imagine that a bunch of people come to your party and they begin to argue with the host. They insult him, complain about the food, and even start yelling at the other guests. What do you do if you’re the host?”

“Um, I have no idea.  I’m not very confrontational generally.  I wouldn’t want to kick anybody out.”

“You don’t have to kick them out.  But you sure a heck don’t invite them to the next party,” Mike said simply.

“I can’t prevent people from visiting my blog.”

“But you don’t have to approve their comments!” he said, as if he’d just solved one of the world’s biggest problems.

“That’s kinda rude…don’t you think?  And I don’t want to get a reputation for just deleting people’s comments.”

“Then just don’t engage them. If they don’t agree with you, fine. Let them have their say if you want. But don’t respond to them. They only keep coming at you because you make it fun for them to do so.”

“But isn’t my job as a blogger, or as a dinner party host, to talk to my guests and not ignore them?”

“It’s your blog, Jonathan. You can do whatever you want. And if you just want to ignore them, fine. What’s the worst they do…stop coming? Just ask yourself, are any of their comments really adding to the quality or experience of Fan Film Factor? If so, then fine. But if not, then why bother? Do something productive instead.”

So at least for the time being, I am going to stop engaging with the detractors. Mike’s right. It really doesn’t add anything to this blog, and to be honest, I don’t know why I’ve self-appointed myself as the unofficial defender of Alec Peters and Axanar Productions. Lord knows I’m not getting paid to be the official Axanar spokesman (which hasn’t stopped a fair number of those same detractors from constantly making that claim).

And to be honest, there’s nothing that really needs to be defended anymore. The lawsuit is over. Nothing anyone says at this point will affect the fact there was a settlement that both sides have agreed to.

All of this standing up for my friend Alec and my beloved project of Axanar against the same old arguments for the thousandth time…from people who aren’t ever going to change their minds or help with the next crowd-funding campaign but simply fling dung from their branches in the trees…debating with them over and over and over is just a waste of time and energy. And to tell you the truth, this blog takes up enough of my days and nights already. I really think I wouldn’t mind just ignoring the detractors for a while…maybe a long while. Sure, I might still respond to a few of them every now and then…if it’s a polite, rational, and civilized post.

But the bickering and sparring—man!—the quatloos just aren’t worth it!