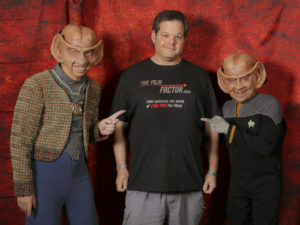 Hey, did you notice the “SHOP” button over there in the upper right corner on the main menu bar? Betcha didn’t! It’s right next to the “CONTACT US” option. (“Us”? It’s pretty much just me here. I should change that.)

It’s okay if you didn’t notice—no one did—for months! The button has been up there since late February, I think. Initially, I never even intended to sell FAN FILM FACTOR T-Shirts. But an amusing series of events led to the creation of an FFF online store. Wanna hear a funny story?

Last summer, with the Axanar lawsuit making the headlines and me blogging furiously about the nuances of all the legal mumbo-jumbo, I was asked by ReasonTV to appear on camera for an online video segment about Axanar and Star Trek fan films in general. Never one to miss a marketing opportunity—and with only 24 hours lead time before the interview—I quickly mocked up a FAN FILM FACTOR logo (no filmstrip) and rushed out to a kiosk at a local mall that transfers computer files onto T-shirts. I hear they use T-shirts from suppliers similar to GB Labels Ltd, hence the good quality. It cost me forty bucks, but at least I had a cool T-shirt to wear with my blog site’s name on it. I heard a friend did the same but he decided to use a heat press to make his own at home! If you want to learn more about how you could do that yourself, check out Big Time Shirt.

Shortly thereafter, a couple of people who’d seen the interview asked me where they could get a FAN FILM FACTOR T-shirt. “Seriously?” I asked. “You want to wear a T-shirt with the logo of silly fan film blog with a few hundred readers???” Their answer was yes, and so I decided to put together a few T-shirt designs using Spreadshirt.com. They have this awesome printing technique called “Flex” where the design NEVER fades. Never! Seriously.

The only drawback to Flex printing is that the design can only have a maximum of three colors. But MY logo is only three colors…so yeah, let’s do this!

Hoping to be a walking billboard for my blog, I made up a batch of shirts to wear for the five days of the Creation 50th Anniversary Star Trek convention. The con was already costing me $500 for full admission…what’s another hundred bucks for five T-shirts, right? (These were half the price of the mall kiosk shirt…and much nicer. The black shirts have this really awesome metallic silver on the logo.)

Anyway, the shirts were fun to wear at the con. And caught up in the moment, I spent an additional $85 on a photo with Rom (Max Grodénchik) and Nog (Aron Eisenberg) in full Ferengi make-up that I could use to make a banner for the online store…

Okay, so I was now in the hole about $225 ($40 for the first shirt, $100 for the next five, and $85 for the Ferengi photo)…all to sell T-shirts and polo shirts on a blog site that was, at the time, making me zero dollars. (I hadn’t added the Google Ads yet…which bring in about 30 cents to a buck a day at this point.) So you’d think I’d rush to get that online store created and start selling all those shirts, right?

The next several months were quite busy. The Axanar legal blogs took me a long time to write. And of course, there were also all those Star Trek fan films to write about and fan producers to interview. And let’s not forget SMALL ACCESS and getting that spectacular Focus Group Report ready to help convince CBS to revise the fan film guidelines. (Yeah, I know it didn’t work. Still not ready to give up yet!)

Add to all of this Jayden starting kindergarten, a plethora of after-school activities to drive him to, and me spending several months filming children’s gymnastics classes to use to create online training videos for the instructors. (I never said I had no job. It’s just none of them are full-time.)

So it wasn’t until mid-winter when I finally had some time to actually work on the FFF online store. (The settlement of the Axanar lawsuit opened up quite a bit of free time for me!) By late February, the store was ready. I decided not to include the shirt that I wore in the $85 Ferengi photo because it had the words “Star Trek” on it, and those two words together are trademarked. Best not to poke the billion dollar corporate bear after taking Axanar‘s side during the lawsuit, right?

Of course, trying to sell T-shirts in mid-winter isn’t exactly the best timing…even though there’s also sweatshirts. So I decided to put up a link on the top menu bar of the blog site and just not tell anyone yet. (I’d do it eventually when the weather got warmer.)

I was actually kinda curious how long it would take folks to notice…especially those two people who said they wanted me to make T-shirts. The answer: three months! On May 23rd, Dave Heagney, Jr. (one of my admins over on the SMALL ACCESS Facebook Group…and also one of the two people who asked me to make T-shirts in the first place) messaged me with a link to the online store saying, “Hey, when did this start?”

“Three months ago!” I responded.

“Is there a link on your website?” he asked.

“Huh? Of course there is.” Then I started wondering, “Wait…if you didn’t notice the SHOP button, then how did you find the online store?”

“It’s been so damned quiet, I took a swing by the Axamonitor FB page to see what they were fapping over. Bax [Charles E. Baxter] has a post with a link to the page. He says it’s for the ‘private fundraising campaign’ for Axanar.”

Anyway, so far I’ve sold ZERO shirts. Dave Heagney hasn’t even bought his yet! (Ya hear that, Heagney???) But hey, they’re up there and available if you want one or two or six or a hundred—T-shirts, polos, sweatshirts, even baseball caps. The black shirts are very slimming (I should know!) and have that awesome metallic silver. The white shirts won’t make you sizzle in the hot summer sun and are a great way to advertise whatever you just had for lunch and spilled on your shirt ’cause, well, white shirts are food magnets, right? And the baseball caps…they’ll cover you head and keep the sun out of your eyes.

So please help me put my son through college, secretly fund Axanar, or simply get myself back to breaking even. Buy and wear your FAN FILM FACTOR shirt or hat with pride!

Or don’t. I really did it just for Dave Heagney. (Ya hear that, Heagney???)

12 thoughts on “Anyone wanna buy a FAN FILM FACTOR T-SHIRT???”