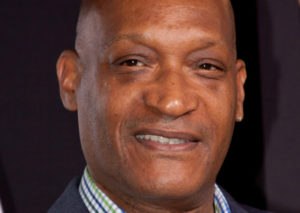 After yesterday’s blog about the troubling behavior of TERRY McINTOSH, I’d really hoped to get back to fan films today.  Yeah, I thought I was out, but Terry pulled me back in.  However, this WILL be my last Terry McIntosh blog for the foreseeable future.  I don’t want to keep giving him all this attention, even if it is completely negative.  But I felt it was necessary to follow-up on yesterday’s blog because of something that happened later on last evening.

Quick recap: Terry McIntosh, who worked with Axanar Productions for years before flying off in a huff has all the footage from Prelude to Axanar…including outtakes.  Even though Terry signed a non-disclosure agreement agreeing to keep all Axanar-related materials confidential, he already leaked an early version of the full Axanar script, and now he’s announced plans to release a Prelude to Axanar blooper reel…even though he doesn’t own the footage or have permission to do so.

Terry’s stated intention is to use the blooper reel to embarrass Alec Peters, who apparently worked through numerous bad takes to get his performance as Garth to a point where it would be strong enough to feature in the fan film alongside the professional actors (who obviously didn’t flub their lines as much as Alec did…since he’s not a trained actor).

Terry contacted the other actors (with the exception of the late Richard Hatch and his estate) to ask “permission” to use their blooper footage (failing to mention that he was no longer with Axanar Productions and was doing this “rogue” in an attempt to embarrass Alec Peters).  Although Kate Vernon said okay, Gary Graham and J.G. Hertzler said no.

Then Terry said this: 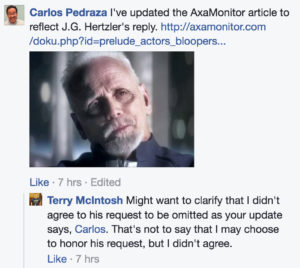 In other words, Terry asked for permission, was not given that permission, and is now considering ignoring this actor’s wishes and using the footage anyway.

What I wrote in yesterday’s blog was NOT pretty.  But at least, I thought, this can’t get any worse.  There’s no way for Terry to possibly sink any lower.

Man, was I wrong…

I was told yesterday that the actors involved in this sudden controversy were not at all happy that Terry represented himself as being authorized to release an Axanar blooper reel, even though their responses to Terry were polite and pleasant.  However, after being informed that Tony Todd’s agent/manager was planning to send Terry a sternly-worded e-mail warning, I was asked to please not mention that on Fan Film Factor…and I complied.

So why am I mentioning it now?  Because it’s now public thanks to the following almost unbelievably obnoxious post by Terry McIntosh himself last evening…

Yesterday, a few detractors were trying to actually DEFEND Terry and his actions.  Today, I can’t see how anyone in their right mind could make a defense of this kind of behavior.

And in case anyone was wondering, no, Terry’s response was NOT the correct one.  The correct response would have been:

Please accept my apologies and rest assured that I will honor Mr. Todd’s wishes in this matter.  I am a big fan of his work and greatly enjoyed my interactions with him on Prelude to Axanar.  It was not my intention to cause conflict or unease for you, Mr. Todd, and/or Tony Todd Productions, Inc.

The judges would also have accepted any reasonable variation on the above paragraph that included humility and respect.  However, “I’ll defer to the advice of my counsel on this matter before commenting further…” is nowhere near the proper response unless you’re spoiling for a legal fight.  And “what is the direct contact information for Tony Todd’s legal representation so that they may confer and then translate the scope of your contact in to terms that someone like myself could understand?” is just plain obnoxious.

There was, of course, nothing unclear or ambiguous in what Tony’s agent sent to Terry:

I would caution you not to release any material containing my client’s image, likeness or voice as we have no agreement for same and it would there for irreparably cause damage to Tony Todd and Tony Todd Productions, Inc.

I really don’t think someone has to be a licensed attorney to figure out that this means, “No, don’t do it, man.”

If you release any media, photo, voice, etc. without our express written authorization we will immediately seek legal remedy.

Again, that doesn’t really sound ambiguous or like the start of a legal negotiation.

And it should be noted that when Terry asks for the contact information for Tony Todd’s attorney, what he is really asking is for Tony Todd to pay $500/hour (or thereabouts) for his lawyer to explain to this arrogant and presumptuous little Trekkie fan that “no” means “no.”  Agents and managers work much more cheaply, so I suspect Terry will not be supplied with the contact information for Tony Todd’s attorney unless Terry first offers to reimburse Tony for any accrued legal expenses for his lawyer to tell this little prick to f-off.

I ranted enough yesterday, and Terry’s posted comment speaks for itself.  Even some of the detractors have now tried to talk reason with Terry after his Facebook post yesterday:

That last two lines in the above screen cap actually say it all.

The Axanar detractors like to crucify Alec Peters for any number of things, but one of their favorites is for bringing down the wrath of CBS and Paramount in the form of a lawsuit.  But Alec never actually tried to get sued.  (That’s just stupid.)  In fact, he met with CBS executives on four different occasions looking for guidance so he would NOT be sued.  He never said “bring it on” and lawyered up with intellectual property or entertainment attorneys in anticipation of a court battle.  No, the only time Alec Peters finally sought out legal representation was AFTER he was served with a lawsuit.

Terry, on the other hand…

For some reason I simply cannot comprehend, he seems to be spoiling for a courtroom battle.  He’s like a Klingon with a lawyer on retainer.  At first, it seemed like Terry was simply targeting Alec and trying to goad him into suing Terry…something Alec has told me is a waste of his time, money, and effort.

But now Terry is poking the bear of the actors themselves.  I don’t know why.  Is he that angry at the world (this is now way beyond just being pissed off at Alec Peters)?  Is he just off his meds?  Is he “breaking bad”?  Or is this the Trekkie equivalent of “death by cop” where you turn yourself into some kind of fan pariah and get voted off the starship?  I really have no idea.

But I do know one thing.  Even though Terry is specifically humiliating himself in front of these actors, he is leaving a bad taste in their collective mouths when it comes to dealing with fan films.  Alec did not do that.  Even after Prelude to Axanar, actors like Gary Graham appeared in other fan productions.  J.G. Hertzler and Kate Vernon are reportedly still looking forward to appearing in the two-part Axanar sequel films.  And it’s possible that one day—especially if CBS and Paramount ever come to their senses about guideline #5—Trek alumni might be allowed back into fan films.

But if Terry keeps pulling this shat, if he keeps turning petty feuds and meaningless vendettas into something that becomes an aggravation to these actors (or in the case of J.G. Hertzler, distracts them from a run for a seat in the U.S. House of Representatives), how many actors will want to bother with fan films at all in the future…even if they’re once again allowed to?

Yesterday, the best defense the detractors came up with for Terry was to say that Alec Peters, whom they believe brought ruin to all fan films, was still worse. That argument is gonna be a tough sell today. It now looks as though Terry McIntosh is trying to claim that mantle of infamy all for himself.

40 thoughts on “TERRY McINTOSH is officially warned by actor TONY TODD not to use his AXANAR blooper footage!”