Hey, folks.  Now that we know that Spock not only had a Vulcan half-brother (that he never talked about) but also an adopted human half-sister (that he also never talked about…the lead character of Michael Burnham from the upcoming Star Trek: Discovery), I thought I’d create a fun little revised Sarek and Amanda “family portrait”… 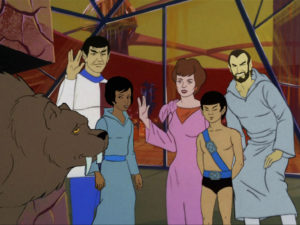